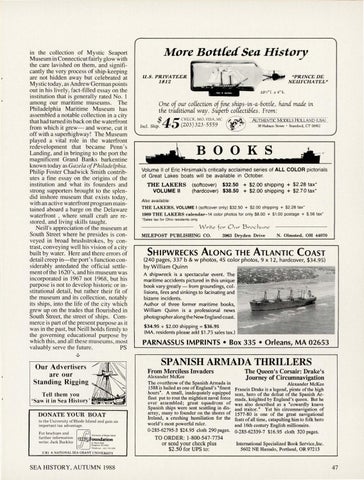 in the collection of Mystic Seaport Museum in Connecticut fairly glow with the care lavished on them, and significantly the very process of ship-keeping are not hidden away but celebrated at Mystic today, as Andrew German points out in hi s live ly, fact-filled essay on the institution that is generally rated No. 1 among our maritime museums. The Philadelphia Maritime Museum has assembled a notable collection in a city that had turned its back on the waterfront from which it grew- and worse, cut it off with a superhighway! The Museum played a vital role in the waterfront redevelopment that became Penn 's Landing, and in bringing to the port the magnificent Grand Banks barkentine known today as Gaze la of Philadelphia. Philip Foster Chadwick Smith contributes a fine essay on the origins of the institution and what its founders and strong supporters brought to the splendid inshore museum that exi sts today, with an active waterfront program maintained aboard a barge on the Delaware waterfront , where small craft are restored, and living skills taught. Neill's appreciation of the museum at South Street where he pres ides is conveyed in broad brushstrokes, by contrast, conveying well his vi sio n of a city built by water. Here and the re errors of detail creep in- the port 's function considerably antedated the official settlement of the 1620's, and hi s museum was incorporated in 1967 not 1968, but his purpose is not to develop historic or institutional detail , but rather their fit of the museum and its collection, notably its ships, into the life of the city which grew up on the trades that flourished in South Street, the street of ships. Commerce is part of the present purpose as it was in the past, but Nei 11 hold s firmly to the governing educational purpose by which thi s, and all these museums, most PS valuably serve the future.

BOOKS Volume II of Eric Hirsimaki 's critically acclaimed series of ALL COLOR pictorials of Great Lakes boats will be available in October.

DONATE YOUR BOAT to the University of Rhode Isla nd and gain an important tax advantage.

Alexander McKee The overthrow of the Spanish Armada in 1588 is hailed as one of England's "finest hours" . A small, inadequately equipped fleet put to rout the mightiest naval force ever assembled ; great squadrons of Spanish ships were sent scuttling in disarray, many to founder on the shores of Ireland , a crushing humiliation for the world 's most powerful ruler. 0-285-62795-3 $24. 95 cloth 290 pages.

Alexander McKee Francis Drake is a legend, pirate of the high seas, hero of the defeat of the Spanish Armada, knighted by England's queen. But he was also described as a "cowardly knave and traitor." Yet his circumnavigation of 1577-80 is one of the great navigational feats of all time, catapulting him to folk hero and 16th century English millionaire. 0-285-62339-7 $16. 95 cloth 320 pages.