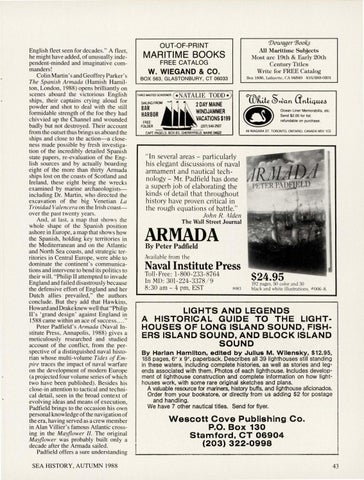 English fleet seen for decades. " A fleet, he might have added, of unusually independent-minded and imaginative commanders! Co Ii n Martin 's and Geoffrey Parker's The Spanish Armada (Hamish Hamilton , London , 1988) opens brilliantl y on scenes aboard the victorious English ships, their captains crying aloud for powder and shot to deal with the still formidable strength of the foe they had chivvied up the Channel and wounded badly but not destroyed. Their account from the outset thus brings us aboard the ships and close to the action-a closeness made poss ible by fresh investigation of the incredibly detailed Spanish state papers, re-evaluation of the Engli sh sources and by actually boarding eight of the more than thirty Armada ships lost on the coasts of Scotland and Ireland, these eight being the wrecks examined by marine archaeologistsincluding Dr. Martin, who directed the excavation of the big Venetian La Trinidad Valencera on the Irish coastover the past twenty years. And , at last, a map that shows the whole shape of the Spanish position ashore in Europe, a map that shows how the Spanish, holding key territories in the Mediterranean and on the Atlantic and North Sea coasts, and strategic territories in Central Europe, were able to dominate the continent's communications and i'ntervene to bend its politics to their will. "Philip II attempted to inv ade England and failed disastrously because the defensive effort of England and her Dutch allies prevailed," the authors conclude. But they add that Hawki ns, Howard and Drake knew wel Ithat "Philip II ' s 'grand design' against England in 1588 came within an ace of success .. .. " Peter Padfield 's Armada (Naval Institute Press, Annapoli s, 1988) g ives a meticulously researched and studied account of the conflict, from the perspective of a distinguished naval historian whose multi-volume Tides of Empire traces the impact of naval warfare on the development of modem Europe (a projected four volume series of which two have been published). Besides hi s close-in attention to tactical and technical detail , seen in the broad context of evolving ideas and means of execution, Padfield brings to the occasion his own personal knowledge of the nav igation of the era, having served as a crew member in Alan Villier's famous Atlantic crossing in the Mayflower II. The original Mayflower was probably built only a decade after the Armada sailed. Padfield offers a sure understanding SEA HISTORY, AUTUMN 1988

"In several areas - particularly his elegant discussions of naval armament and nautical technology - Mr. Padfield has done a superb job of elaborating the kinds of detail that throughout history have proven critical in the ro ugh eq uati ons of battle." John R. Alden The Wall Street Journal

LIGHTS AND LEGENDS A HISTORICAL GUIDE TO THE LIGHTHOUSES OF LONG ISLAND SOUND, FISHERS ISLAND SOUND, AND BLOCK ISLAND SOUND By Harlan Hamllton, edited by Jullus M. Wilensky, $12.95, 188 pages, 6 11 x 9", paperback. Describes all 39 lighthouses still standing in these waters. including complete histories. as well as stories and legends associated with them. Photos of each lighthouse. Includes development of lighthouse construction and complete information on how lighthouses work, with some rare original sketches and plans. A valuable resource for mariners. history buffs, and lighthouse aficionados. Order from your bookstore, or directly from us adding $2 for postage and handling. We have 7 other nautical titles. Send for flyer.