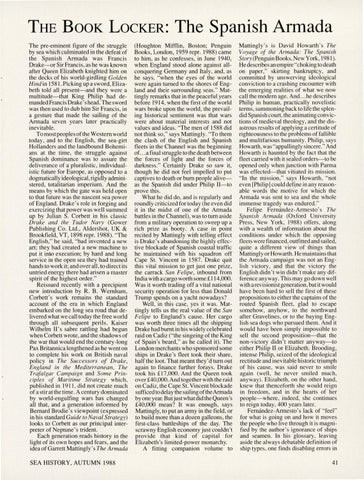 THE BooK LOCKER: The Spanish Armada The pre-eminent figure of the struggle by sea which culminated in the defeat of the Spanish Armada was Francis Drake--0r Sir Francis, as he was known after Queen Elizabeth kni ghted him on the decks of hi s world-girdling Golden Hind in 1581 . Picking up a sword , E lizabeth told all present-and they were a multitude-that King Philip had demanded Francis Drake 's head. The sword was then used to dub him Sir Francis, in a gesture that made the sailing of the Armada seven years later practically inev itable. To most peoples of the Western world today, and to the English, the sea-girt Hollanders and the landbound Bohemians at the time, the struggle against Spanish dominance was to assure the deliverance of a pluralistic, individualistic future for Europe, as opposed to a dogmatically ideological , rigidly administered, totalitarian imperium. And the means by which the gate was he ld open to that future was the nascent sea power of England. Drake 's role in forging and exercizing that power was well summed up by Juli an S. Corbett in hi s classic Drake and the Tudor Navy (Gower Publi shing Co. Ltd., Aldershot, UK & Brookfield, VT, 1898 repr. 1988). "The English," he said, "had invented a new art; they had created a new machine to put it into execution; by hard and long service in the open sea they had trained hands to work it; and over all , to direct its untried energy there had arisen a master spirit of the highest order." Reissued recently with a percipient new introduction by R. B. Wemham, Corbett's work remains the standard account of the era in which England embarked on the long sea road that deli vered what we call today the free world through all subsequent perils. Kaiser Wilhelm H's sabre rattling had begun when Corbett wrote, and the shadows of the war that would end the century-long Pax Britanni ca lengthened as he went on to complete his work on British naval policy in The Successors of Drake, England in the Mediterranean, The Trafalgar Campaign and Some Principles of Maritime Strategy which, publi shed in 1911 , did not create much of a sti r at the time. A century dominated by world-engu lfing wars has changed all that, and a generation informed by Bernard Brodie's viewpoint (expressed in hi s standard Guide to Naval Strategy) looks to Corbett as our principal interpreter of Neptune's trident. Each generation reads history in the light of its own hopes and fears, and the idea of Garrett Mattingly 's The Armada SEA HISTORY, AUTUMN 1988

(Houghton Mifflin, Boston; Penguin Books, London, 1959 repr. 1988) came to him, as he confesses, in June 1940, when England stood alone against allconquering Germany and Italy, and , as he says, "when the eyes of the world were again turned to the shores of England and the ir surrounding seas." Mattingly remarks that in the peaceful years before 1914, when the first of the world wars broke upon the world, the prevailing historical sentiment was that wars were about material interests and not values and ideas. "The men of 15 88 did not think so," says Mattingly. "To them the clash of the English and Spanish fleets in the Channel was the beginning of ... a fin al struggle to the death between the forces of light and the fo rces of darkness." Certainly Drake so saw it, though he did not feel impelled to put captives to death or bum peopl e aliveas the Spanish did under Philip II-to prove thi s. What he did do, and is regularl y and roundly criticized for today (he even did it in the midst of one of the Armada battles in the Channel), was to tum aside from a military operation to sweep up a rich prize as booty. A case in point rec ited by Mattingly with telling effect is Drake 's abandoning the highl y effective blockade of Spanish coastal traffic he maintained with hi s squadron off Cape St. Vincent in 1587. Drake quit this vital mi ssion to get just one prize, the carrack San Felipe, inbound from India with a cargo worth some £ 114,000. Was it worth trading off a vital national security operation for less than Donald Trump spends on a yacht nowadays? Well , in this case, yes it was. Mattingly tells us the real value of the San Felipe to England's cause. Her cargo was worth three times all the shipping Drake had burnt in his widely celebrated raid on Cadiz ("the singeing of the King of Spain's beard," as he called it). The London merchants who sponsored some ships in Drake's fleet took their share, half the loot. That meant they ' d tum ou,t again to finance further forays. Drake took hi s £ 17,000. And the Queen took over£40,000. And together with the raid on Cadiz, the Cape St. Vincent blockade sufficed to delay the sai ling of the Armada by one year. Butjustwhatdid the Queen's £40,000 mean? It was enough, says Mattingly, to put an army in the field , or to build more than a dozen galleons , the first-class battleships of the day. The scrawny English economy just couldn 't provide that kind of capital for Elizabeth 's limited-power monarchy. A fitting companion volume to

Mattingly's is Dav id Howarth's The Voyage of the Armada: The Spanish Story (Penguin Books, New York, 198 1). He describes an empire "choking to death on paper," skirting bankruptcy , and committed by unswerving ideological conviction to a crashing encounter with the emerging realities of what we now call the modem age. And .. .he describes Philip in human, practically novelistic terms, summoning back to life the splendid Spanish court, the animating convictions of medieval theology, and the disastrous results of appl ying a certitude of righteousness to the problems of fa llible and multifario us humani ty. Phi lip, says Howarth, was "appallingly sincere." And Howarth is haunted by the fact that the fl eet carried wi th it sealed orders-to be opened only when j unction with Parma was effected-that vitiated its mission . "In the mi ssion," says Howarth , " not even [Philip] could define in any reasonable words the motive for which the Armada was sent to sea and the whole immense tragedy was endured." Felipe Femandez-Armesto's The Spa nish Armada (Oxford Uni versity Press, New York, 1988) offers, along with a wealth of information about the conditions under which the opposing fleets were fi nanced, outfitted and sailed, quite a different view of things than Mattingly or Howarth . He maintains that the Armada campaign was not an Engli sh victory, and that the victory the English didn ' t win didn't make any difference anyway. This may go down well with a rev isionist generation, but it would have been hard to sell the first of these propositions to either the captains of the routed Spanish fleet, glad to escape somehow , anyhow, to the northward after Gravelines, or to the bay ing English sea dogs who pursued them. And it wou ld have been simpl y imposs ible to sell the second proposition- that the non-v ictory didn ' t matter anyway-to either Philip II or Elizabeth . Brooding, intense Philip, seized of the ideo logical rectitude and inev itable hi storic triumph of hi s cause, was said never to smile again (well , he never smiled much, anyway). Eli zabeth, on the other hand , knew that thenceforth she would reign in freedom , and in the hearts of her people-where, indeed, she continues . to reign today, 400 years later. Femandez-Armesto's lack of "feel" for what is going on and how it moves the people who live through it is magnified by the author's ignorance of ships and seamen. In hi s glossary, leav ing as ide the always debatable definition of ship types, one finds di sabling errors in 41