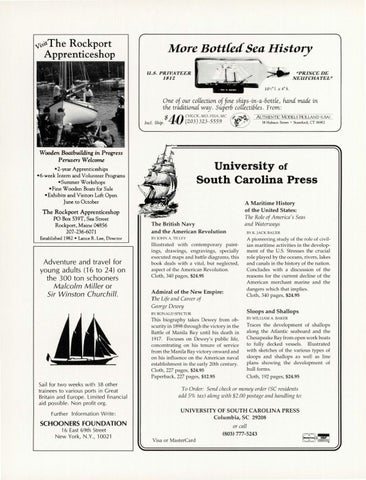 The British Navy and the American Revolution BY JOH N A. TILLEY

Admiral of the New Empire: The Life and Career of George Dewey BY RONALD SPECTOR

This biography takes Dewey from obscurity in 1898 through the victory in the Battle of Manila Bay until his dea th in 1917. Focuses on Dewey's public life, concentrating on his tenure of service from the Manila Bay victory onwa rd and on his influence on the American naval establishment in the early 20th century. Cloth, 227 pages, $24.95 Paperback, 227 pages, $12.95

A Maritime History of the United States: The Role of America's Seas and Waterways BY K. JACK BAUER

A pioneering study of the role of civilian maritime activities in the development of the U.S. Stresses the crucial role played by the ocea ns, rivers, lakes and canals in the history of the natio n. Concludes with a discussion of the reasons for the current decline of the American merchant marine and the dangers which that implies. Cloth, 340 pages, $24.95

Sloops and Shallops BY WILLIAM A. BAKER

Traces the development of shallops along the Atlantic seaboa rd and the Chesapeake Bay from open work boats to fully decked vessels. Illustrated with sketches of the various types of sloops and shallops as well as line plans showing the development of hull forms. Cloth, 192 pages, $24.95

To Order: Send check or money order (SC residents add 5% tax) along with $2.00 postage and handling to: