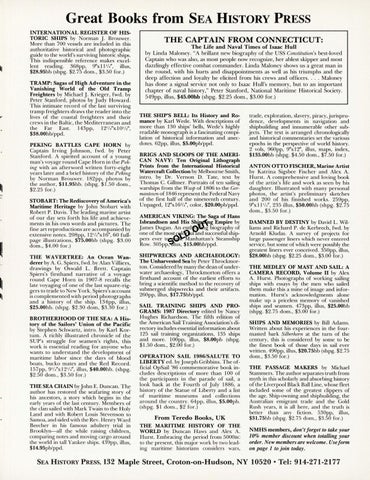 Great Books from INTERNATIONAL REGISTER OF HISTORIC SHIPS by Norman J. Brouwer. More than 700 vessels are included in this authoritative historical and photographic guide to the world&#39;s surviving historic sh ips. This indispensible reference makes excellent reading. 368pp, 9&quot;xl 11/.&quot;, illus, $28.95hb (shpg. $2.75 &lt;lorn., $3.50 for.) TRAMP: Sagas of High Adventure in the Vanishing World of the Old Tramp Freighters by Michael J. Krieger, fwd. by Peter Stanford, photos by Judy Howard. This intimate record of the last surviving tramp freighters draws the reader into the lives of the coastal freighters and their crews in the Baltic, the Mediterranean and the Far East. 143pp, 12 1/i&#39;xl0 1/2&quot;, $38.00hb/ppd. PEKING BATTLES CAPE HORN by Captain Irving Johnson, fwd. by Peter Stanford. A spirited account of a you ng man&#39;s voyage round Cape Horn in the Peking with an afterword written forty-eight years later and a brief history of the P eking by Norman Brouwer. 182pp, photos by the author, $11.95hb. (shpg. $1.50 &lt;lorn., $2.25 for.) STOBART: The Rediscovery of America&#39;s Maritime Heritage by John Stobart with Robert P. Davis. The leading marine artist of our day sets forth his life and achievements in his own words and pictures. The fine art reproductions are accompanied by extensive notes. 208pp, I 2 1/i&#39;x I 6&quot;, 60 fullpage illustrations, $75.00hb (shpg. $3.00 &lt;lorn., $4.00 for.) THE WAVERTREE: An Ocean Wandere~ by A.G. Spiers, fwd. by Alan Villiers, drawings by Oswald L. Brett. Captain Spiers&#39;s firsthand narrative of a voyage round Cape Horn in 1907-8 recalls the late voyaging of one of the last square-riggers to trade to New York. Spiers&#39;s account is complemented with period photographs and a history of the ship. 134pp, illus, $25.00hb. (shpg. $2 .30 dom, $3.30 for.) BROTHERHOOD OF THE SEA: A History of the Sailors&#39; Union of the Pacific by Stephen Schwartz, intro. by Karl Kortum. A richly illustrated chronicle of the SUP&#39;s struggle for seamen&#39;s rights, this work is essential reading for anyone who wants to understand the development of maritime labor since the days of blood boats, bucko mates and the Red Record. 157pp, 9 1/.&#39;&#39;xl2 1/ / &#39; , illus, $40.00hb. (shpg. $2.50 dom., $3 .50 for.) THE SEA CHAIN by John E. Duncan. The author has restored the seafaring story of his ancestors, a story which begins in the early years of the last century. Members of the clan sailed with Mark Twain to the Holy Land and with Robert Louis Stevenson to Samoa, and sided with the Rev. Henry Ward Beecher in his famous adultery trial in Brooklyn-all the while raising children, comparing notes and moving cargo around the world in tall Yankee ships. 439pp, illus, $14.95pb/ppd. SEA HISTORY PRESS,

THE CAPTAIN FROM CONNECTICUT: The Life and Naval Times of Isaac Hull by Linda Maloney. &quot;A brillant new biography of the USS Constitution&#39;s best-loved Captain who was also, as most people now recognize, her ablest skipper and most dazzlingly effective combat commander. Linda Maloney shows us a great man in the round, with his hurts and disappointments as well as his triumphs and the deep affection and loyalty he elicited from his crews and officers .... Maloney hqs done a signal service not only to Isaac Hull&#39;s memory, but to an important chapter of naval history,&quot; Peter Stanford, National Maritime Historical Society. 549pp, illus, $45.00hb (shpg. $2.25 dom., $3.00 for.)

THE SHIP&#39;S BELL: Its History and Romance by Karl Wede. With descriptions of more than 130 ships&#39; bells, Wede&#39;s highly readable monograph is a fascinating compilation of historical information and anecdotes. 62pp, illus, $5.00pb/ppd. BRIGS AND SLOOPS OF THE AMERICAN NA VY: Ten Original Lithograph Prints from the International Historical Watercraft Collection by Melbourne Smith, intro. by Dr. Vernon D. Tate, text by Thomas C. Gillmer. Portraits of ten sailing warships from the Wasp of 1806 to the Germantown of 1846 represent the Federal Navy of the first half of the nineteenth century. Unpaged, 12&quot;x l6&#39;/.&#39;&#39;, color, $20.00pb/ppd. AMERICAN VIKING: The Saga of Hans Isbrandtsen and His ~h · g Empire by James Dugan. An ent · g biography of one of the most C&lt;illc9... and successful shippers ever t~l-&#39;M.anhattan&#39;s Steamship Row. 305pp~~s, $15.00hb/ppd. SHIPWRECKS AND ARCHAEOLOGY: The Unharvested Sea by Peter Throckmorton. Considered by many the dean of underwater archaeology, Throckmorton offers a firsthand account of the earliest efforts to bring a scientific method to the recovery of submerged shipwrecks and their artifacts. 260pp, illus, $17.75hb/ppd. SAIL TRAINING SHIPS AND PROGRAMS: 1987 Directory edited by Nancy Hughes Richardson. The fifth edition of the American Sail Training Association&#39;s directory includes essential information about 125 sail training organizations, 135 ships and more. lOOpp, illus, $8.00pb (shpg. $1.50 &lt;lorn., $2.00 for.) OPERATION SAIL 1986/SALUTE TO LIBERTY ed. by Joseph Gribbins. The official OpSail &#39;86 commemorative book includes descriptions of more than 100 of the participants in the parade of sail , a look ba0k at the Fourth of July 1886, a history of the Statue of Liberty and a list of maritime museums and collections around the country. 64pp, illus, $5.00pb. (shpg. $ 1 dom., $2 for.)

trade, exploration, slavery, piracy, jurisprudence, developments in navigation and shipbuilding and innumerable other subj ects. The text is arranged chronologically and historical commentaries set the various epochs in the perspective of world history. 2 vols, 960pp, 9&quot;xl2&quot;, illus, maps, index, $135.00hb (shpg. $4.50 dom., $7.50 for.) ANTON OTTO FISCHER, Marine Artist by Katrina Sigsbee Fischer and Alex A. Hurst. A comprehensive and loving book of the artist&#39;s life and work as seen by his daughter. Illustrated with many personal photos, the artist&#39;s preliminary sketches and 200 of his finished works. 259pp, 9&quot;x l l 1/2&quot;, 235 illus, $50.00hb (sh pg. $2.75 &lt;lorn., $3 .50 for.) DAMNED BY DESTINY by David L. Williams and Richard P. de Kerbrech, fwd . by Arnold Kludas. A survey of projects for large passenger liners which never entered service, but some of which were possibly the greatest liners ever conceived. 350pp, illus, $28.00hb (shpg. $2.25 dom., $3.00 for.) THE MEDLEY OF MAST AND SAIL: A CAMERA RECORD, Volume II by Alex A._Hur~t. Photographs of working sailing ships with essays by the men who sailed them make this a mine of image and information. Hurst&#39;s acknowledgments alone make up a priceless memory of vanished ships and seamen. 473pp, illus, $25.00hb (shpg. $2.75 &lt;lorn., $3.00 for.) SHIPS AND MEMORIES by Bill Adams. Written about his experiences in the fourmasted bark Silberhorn at the turn of the century, this is considered by some to be the finest book of those days in sail ever written. 490pp, illus, $20.75hb (shpg. $2.75 dom., $3.50 for.)

THE PASSAGE MAKERS by Michael Stammers. The author separates truth from myth in this scholarly and absorbing history of the Liverpool Black Ball Line, whose fleet included some of the greatest clippers of the age. Ship-owning and shipbuilding, the Australian emigrant trade and the Gold Rush years, it is all here, and the truth is better than any fiction . 530pp, illus, $31.75hb (shpg. $2 .75 &lt;lorn., $3.50 for.)

THE MARITIME HISTORY OF THE WORLD by Duncan Haws and Alex A. Hurst. Embracing the period from 5000BC to the present, this major work by two leading maritime historians considers wars,

NMHS members, don&#39;t forget to take your 10% member discount when totalling your order. New members are welcome. Use form on page 1 to join today.