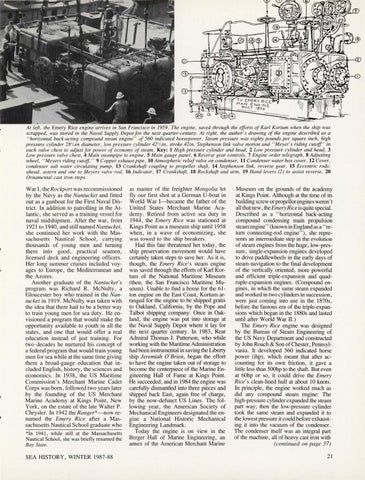 War I, the Rockport was recommissioned by the Navy as the Nantucket and fitted out as a gunboat for the First Naval District. In addition to patrolling in the Atlantic, she served as a training vessel for naval midshipmen. After the war, from 1921to1940, and still named Nantucket, she continued her work with the Massachusetts Nautical School , carrying thousands of young men and turning them into good, practical seamen, licensed deck and engineering officers . Her long summer cruises included voyages to Europe, the Mediterranean and the Azores . Another graduate of the Nantucket&#39;s program was Richard R. McNulty , a Gloucester boy who trained in the Nantucket in 1919. McNulty was taken with the idea that there had to be a better way to train young men for sea duty . He envisioned a program that would make the opportunity available to youth in all the states, and one that would offer a real education instead of just training . For two decades he nurtured his concept of a federal program that would train young men for sea while at the same time giving them a broad-gauge education that included English , history , the sciences and economics. In 1938, the US Maritime Commission&#39;s Merchant Marine Cadet Corps was born, followed two years later by the founding of the US Merchant Marine Academy at Kings Point, New York , on the estate of the late Walter P. Chrysler. In 1942 the Ranger*-now renamed the Emery Rice after a Massachusetts Nautical School graduate who *In I 941 , while still at the Massachusetts Nautical School, she was briefly renamed the Bay State.

as master of the freighter Mongolia let fl y our first shot at a German U-boat in World War I-became the father of the United States Merchant Marine Academy. Retired from active sea duty in 1944, the Emery Rice was stationed at Kings Point as a museum ship until 1958 when, in a wave of economizing, she was towed to the ship breakers . Had this fate threatened her today , the ship preservation movement would have certainly taken steps to save her. As it is , though, the Emery Rice&#39;s steam engine was saved through the efforts of Karl Kortum of the National Maritime Museum (then, the San Francisco Maritime Museum). Unable to find a home for the 61ton engine on the East Coast, Kortum arranged for the engine to be shipped gratis to Oakland, California, by the Pope and Talbot shipping company. Once in Oakland, the engine was put into storage at the Naval Supply Depot where it lay for the next quarter century. In 1983, Rear Admiral Thomas J. Patterson, who while working with the Maritime Administration had been instrumental in saving the Liberty ship Jeremiah O&#39;Brien, began the effort to have the engine taken out of storage to become the centerpiece of the Marine Engineering Hall of Fame at Kings Point. He succeeded, and in 1984 the engine was carefuJly dismantled into three pieces and shipped back East, again free of charge, by the now-defunct US Lines . The following year, the American Society of Mechanical Engineers designated the engine a National Historic Mechanical Engineering Landmark . Today the engine is on view in the Berger Hall of Marine Engineering, an annex of the American Merchant Marine

Museum on the grounds of the academy at Kings Point. Although at the time of its building screw or propellorengines weren&#39;t all that new , theEmery Rice is quite special. Described as a &quot; horizontal back-acting compound condensing main propulsion steam engine&#39;&#39; (known in England as a&#39; &#39;return connecting-rod engine&quot;) , she represents an intermediate step in the evolution of steam engines from the huge, low-pressure, single-expansion engines developed to drive paddlewheels in the early days of steam navigation to the final development of the vertically oriented, more powerful and efficient triple-expansion and quadruple-expansion engines. (Compound engines, in which the same steam expanded and worked in two cylinders in succession, were just coming into use in the 1870s, before the famous era of the triple-expansions which began in the 1880s and lasted until after World War II.) The Emery Rice engine was designed by the Bureau of Steam Engineering of the US Navy Department and constructed by John Roach &amp; Son of Chester, Pennsylvania. It developed 560 indicated horse power (ihp), which meant that after accounting for its own friction, it gave a little less than 500hp to the shaft. But even at 60hp or so, it could drive the Emery Rice&#39;s clean-lined hull at about 10 knots . In principle, the engine worked much as did any compound steam engine: The high-pressure cylinder expanded the steam part way; then the low-pressure cylinder took the same steam and expanded it to the lowest pressure it could before exhausting it into the vacuum of the condenser. The condenser itself was an integral part of the machine, all of heavy cast iron with