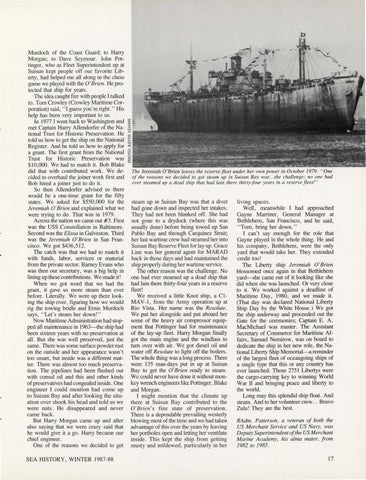 D Murdoch of the Coast Guard; to Harry Morgan; to Dave Seymour. John Pottinger, who as Fleet Superintendent up at Suisun kept people off our favorite Liberty, had helped me all along in the chess game we played with the O&#39;Brien. He protected that ship for years. The idea caught fire with people I talked to. Tom Crowley (Crowley Maritime Corporation) said, &quot;I guess you&#39;re right. &quot; His help has been very important to us . In 1977 I went back to Washington and met Captain Harry Allendorfer of the National Trust for Historic Preservation. He told us how to get the ship on the National Register. And he told us how to apply for a grant. The first grant from the National Trust for Historic Preservation was $10,000. We had to match it. Bob Blake did that with contributed work. We decided to overhaul the joiner work first and Bob hired a joiner just to do it. So then Allendorfer advised us there would be a one-time grant for the fifty states. We asked for $550,000 for the Jeremiah O&#39;Brien and explained what we were trying to do. That was in 1979. Across the nation we came out #3. First was the USS Constellation in Baltimore. Second was the Elissa in Galveston. Third was the Jeremiah O&#39;Brien in San Francisco. We got $436,512. The catch was that we had to match it with funds, labor, services or material from the private sector. Barney Evans who was then our secretary, was a big help in lining up these contributions . We made it! When we got word that we had the grant, it gave us more steam than ever before. Literally. We were up there looking the ship over, figuring how we would rig the towing bridle and Ernie Murdoch says, &quot;Let&#39;s steam her down!&quot; Now Maritime Administration had stopped all maintenance in 1963-the ship had been sixteen years with no preservation at all. But she was well preserved, just the same. There was some surface powder rust on the outside and her appearance wasn&#39;t too smart, but inside was a different matter. There was almost too much preservation. The pipelines had been flushed out with consul oil and this and other kinds of preservatives had congealed inside. One engineer I could mention had come up to Suisun Bay and after looking the situation over shook his head and told us we were nuts. He disappeared and never came back . But Harry Morgan came up and after also saying that we were crazy said that he would give it a go. Harry became our chief engineer. One of the reasons we decided to get SEA HISTORY, WINTER 1987-88

The Jeremiah O&#39;Brien leaves the reserve fleet under her own power in October 1979. &quot;One of the reasons we decided to get steam up in Suisun Bay was ... the challenge; no one had ever steamed up a dead ship that had lain there thirtyjour years in a reserve fleet!&#39; &#39;

steam up in Suisun Bay was that a diver had gone down and inspected her intakes. They had not been blanked off. She had not gone to a drydock (where this was usually done) before being towed up San Pablo Bay and through Carquinez Strait; her last wartime crew had steamed her into Suisun Bay Reserve Fleet for lay up. Grace Line was her general agent for MARAD back in those days and had maintained the ship properly during her wartime service. The other reason was the challenge. No one had ever steamed up a dead ship that had lain there thirty-four years in a reserve fleet! We received a little Knot ship, a ClMAV -1, from the Army operation up at Rio Vista. Her name was the Resolute. We put her alongside and put aboard her some of the heavy air compressor equipment that Pottinger had for maintenance of the lay-up fleet. Harry Morgan finally got the main engine and the windlass to tum over with air. We got diesel oil and water off Resolute to light off the boilers. The whole thing was a long process. There were 135 man-days put in up at Suisun Bay to get the O&#39;Brien ready to steam. We could never have done it without monkey wrench engineers like Pottinger, Blake and Morgan. I might mention that the climate up there at Suisun Bay contributed to the O&#39;Brien&#39;s fine state of preservation. There is a dependable prevailing westerly blowing most of the time and we had taken advantage of this over the years by leaving her portholes open and letting her ventilate inside . This kept the ship from getting musty and mildewed, particularly in her

living spaces. Well, meanwhile I had approached Gayne Marriner, General Manager at Bethlehem, San Francisco, and he said, &quot;Tom, bring her down.&quot; I can&#39; t say enough for the role that Gayne played in the whole thing. He and his company, Bethlehem, were the only yard that would take her. They extended credit too! The Liberty ship Jeremiah O&#39;Brien blossomed once again in that Bethlehem yard-she came out of it looking like she did when she was launched. Or very close to it. We worked against a deadline of Maritime Day, 1980, and we made it. (That day was declared National Liberty Ship Day by the White House.) We got the ship underway and proceeded out the Gate for the ceremonies; Captain E. A. MacMichael was master. The Assistant Secretary of Commerce for Maritime Affairs , Samuel Nemirow, was on board to dedicate the ship in her new role, the National Liberty Ship Memorial-a reminder of the largest fleet of oceangoing ships of a single type that this or any country has ever launched. Those 2751 Libertys were the cargo-carrying key to winning World War II and bringing peace and liberty to the world. Long may this splendid ship float. And steam. And to her volunteer crew ... Bravo Zulu! They are the best.

RAdm. Patterson, a veteran of both the US Merchant Service and US Navy, was Deputy Superintendent ofthe USMerchant Marine Academy, his alma mater, from 1982 to 1985. 17