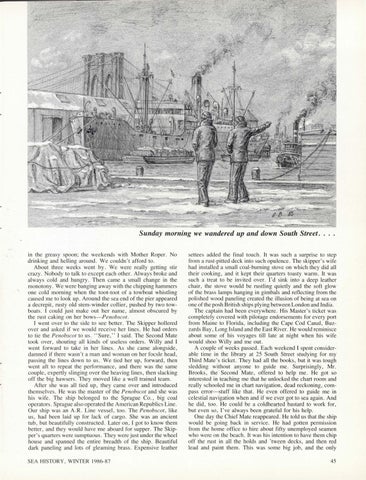 Sunday morning we wandered up and down South Street . ... in the greasy spoon; the weekends with Mother Roper. No drinking and he lling aro und. We cou ldn &#39;t afford to. About three weeks went by. We were really getting stir crazy. Nobody to talk to except each other. Always broke and always cold and hungry. Then came a small change in the monotony. We were banging away with the chipping hammers one cold morning when the toot-toot of a towboat whistling caused me to look up . Around the sea end of the pier appeared a decrepit, rusty old stem-winder collier, pushed by two towboats. I could just make out her name, almost obscured by the rust caking on her bows- Penobscot. I went over to the side to see better. The Skipper hollered over and asked if we would receive her lines. He had orders to tie the Penobscot to us. &quot; Sure,&quot; I said . The Second Mate took over, shouti ng all kinds of useless orders. Willy and I went forward to take in her lines. As she came alongside, damned if there wasn &#39; t a man and woman on her focsle head , passing the lines down to us. We tied her up , forward , then went aft to repeat the performance, and there was the same couple , expertl y slinging over the heavi ng lines, then slacking off the big hawsers. They moved like a well trained team. After she was all tied up , they came over and introduced themselves. He was the master of the Penobscot and she was his wife. The sh ip belonged to the Sprague Co. , big coal operators. Sprague also operated the American Republics Line. Our ship was an A.R. Line vessel , too. The Penobscot, like us, had been laid up for lack of cargo . She was an ancient tub , but beautifully constructed . Later on , I got to know them better , and they would have me aboard for supper. The Skipper&#39; s quarters were sumptuous. They were just under the wheel house and spanned the enti re breadth of the ship . Beautiful dark paneling and lots of gleami ng brass. Expensive leather SEA HISTORY , WINTER 1986-87

settees added the final touch. It was such a surprise to step from a rust-pitted deck into such opulence. The skipper&#39;s wife had installed a small coal-burning stove on which they did all their cooking, and it kept their quarters toasty warm. It was such a treat to be invited over. I&#39;d sink into a deep leather chair, the stove would be rustling quietl y and the soft glow of the brass lamps hanging in gimbals and reflecting from the polished wood paneling created the illusion of being at sea on one of the posh British ships plying between London and India . The captain had been everywhere . His Master&#39;s ticket was completely covered with pilotage endorsements for every port from Maine to Florida , including the Cape Cod Canal , Buzzards Bay , Long Island and the East River. He would reminisce about some of his voyages till late at night when his wife would shoo Willy and me out. A couple of weeks passed. Each weekend l spent considerable time in the library at 25 South Street studying for my Third Mate&#39;s ticket. They had all the books , but it was tough sledding without anyone to guide me . Surprisingly, Mr. Brooks, the Second Mate , offered to help me . He got so interested in teaching me that he unlocked the chart room and really schooled me in chart navigation , dead reckoning, compass error-stuff like that. He even offered to guide me in celestial navigation when and if we ever got to sea again. And he did, too. He could be a coldhearted bastard to work for, but even sci , I&#39;ve always been grateful for hi s help . One day the Chief Mate reappeared. He told us that the ship would be going back in serv ice. He had gotten permission from the home office to hire about fifty unemployed seamen who were on the beach . It was his intention to have them chip off the rust in all the holds and &#39; tween decks, and then red lead and paint them. This was some big job , and the only 45