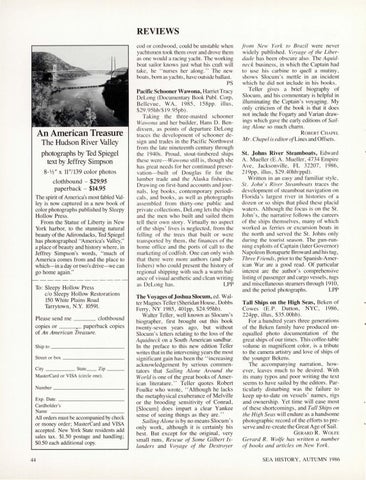 REVIEWS cod or cordwood, could be unstable when yachtsmen took them over and drove them as one would a racing yacht. The work ing boat sailor knows just what his craft will take, he &#39; &#39; nurses her along . &#39;&#39; The new boats, born as yachts, have outside ballast. PS

DeLong (Doc umentary Book Publ. Corp, Be llevue , WA , 1985 , 158pp. illu s, $29. 95hb/$ I9. 95pb). Taking th e three- masted schooner Wawona and her builder, Hans D. Bendixsen , as points of departure De Long traces th e development of schooner design and trades in the Pacifi c Northwest from the late nineteenth century throu gh the 1940s. Proud , stout-timbered ships these were- Wawona still is, though she has great needs for her continued preservation- bui lt of Douglas fir for the lumber trade and the Alas ka fisheries . Drawing on first-hand accounts and journals , log books , contemporary periodica ls , and books , as wel l as photographs assem bled from thirty-o ne public and private coll ection s, De Long lets the ships and the men who built and sa iled them te ll their own story. Virtually no aspect of the ships &#39; lives is neglected , from the fe lling of the trees th at built or were transported by them , the finances of the home office and the ports of call to the marketing of codfi sh. One can only wish th at th ere were more authors (and publishers) who could present the history of regional shipping with such a warm balance of visual aesthetic and clean writing as De Long has. LPP

from New York to Brazil were never wide ly publi shed. Voyage of th e Liberdade has been obscure also. The Aquidneck business, in which the Captain had to use his carbine to quell a mutin y, shows Slocum &#39;s mettle in an incident wh ich he did not inc lude in hi s books. Teller gives a brief biography of Slocum , and his commentary is helpful in illuminating the Captain &#39;s voyaging. My on ly criticism of the book is that it does not inc lude the Fogarty and Varian drawings which gave the early ed itions of Sailing Alone so much chann. R OBERT C HAPEL

Mr. Chapel is editor of Lines and Offsets.

St. Johns River Steamboats, Edward A. Mueller (E .A . Mueller , 4734 Emp ire Ave, Jacksonville , FL 32207 , 1986 , 2 19pp, illus , $29.40hb/ppd). Written in an easy and familiar sty le, St. John &#39;s River Steamboats traces the development of steamboat na viga ti on o n Florida &#39;s larges t river in hi stories of a doze n or so sh ips that plied th ese placid waters. Although the focus is on th e St. John &#39; s, the narrative follows th e careers of the sh ips themselves, many of which worked as ferr ies or exc ursion boats in the north and served the St. Johns on ly durin g th e touri st season . The gun-running exploits of Captain (l ater Governor) Napo leon Bonaparte Broward and hi s tug , Three Friends , prior to the Spanish-American War are a good read. Of particular interest are the author&#39;s comprehensive listing of passenger and cargo vessels, tugs and miscellaneous steamers through 19 10, and the period photographs. LPP

The Voyages of Joshua Slocum, ed. Walter Magnes Teller (Sheridan House, Dobbs Ferry , NY 1985 , 40 1pp, $24 .95hb). Walter Teller, we ll known as Slocum &#39;s biographer, first brought out this book twenty-seven years ago, but without Slocum&#39;s letters relating to the loss of the Aquidneck on a South American sandbar. In the preface to this new edition Teller writes that in the intervening years the most significant gain has been the &quot;i ncreasing acknowledgement by serious commentators that Sailing Alone Around the World is one of the great books of American literature.&quot; Teller quotes Robert Fou lke who wrote, &quot;Although he lacks the metaph ysical exuberance of Melville or the brooding sensitivity of Conrad , [Slocum] does impart a c lear Yankee sense of seeing things as th ey are .&quot; Sailing Alone is by no means Slocum &#39; s on ly work , although it is certainly his best. But except for the ori ginal, very small runs , Rescue of Some Gilbert Islanders and Voyage of the Destroyer

Tall Ships on the High Seas, Beken of Cowes (E.P . Dutton, NYC, 1986 , 224pp, illu s, $35.00hb). For a hundred yea rs three generations of the Beken fami ly ha ve produced unequalled photo documentation of the great ships of our times. This coffee-table volume in magnificent color, is a tribute to the camera aitistry and love of ships of the younger Bekens. The accompanying narration, however, leaves much to be desired. With its man y typos and poor writing the text seems to have sailed by the editors. Partic ul arl y disturbing was the failure to keep up-to-date on vesse ls&#39; names, ri gs and ownership . Yet time wi ll ease most of these shortcom ings, and Tall Ships on the High Seas will end ure as a handsome photographic record of the efforts to preserve and re-create the Great Age of Sai I. GERARD R . WOLFE