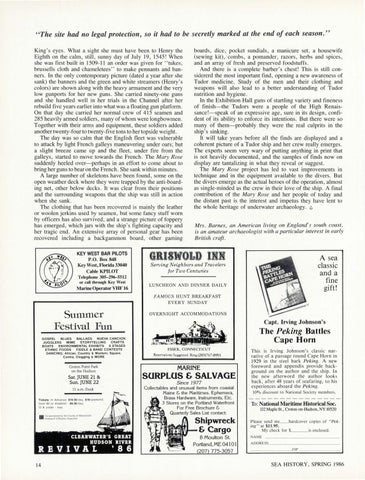 &quot;The site had no legal protection, so it had to be secretly marked at the end of each season.&quot; King&#39;s eyes. What a sight she must have been to Henry the Eighth on the calm, still, sunny day of July 19, 1545! When she was first built in 1509-11 an order was given for &quot; tukes , brussells cloth and chameletees&quot; to make pennants and banners. In the only contemporary picture (dated a year after she sank) the banners and the green and white streamers (Henry &#39; s colors) are shown along with the heavy armament and the very low gunports for her new guns. She carried ninety-one guns and she handled well in her trials in the Channel after her rebuild five years earlier into what was a floating gun platform . On that day she carried her normal crew of 415 seamen and 285 heavily armed soldiers , many of whom were longbowmen . Together with their arms and equipment, these soldiers added another twenty-four to twenty-five tons to her topside weight. The day was so calm that the English fleet was vulnerable to attack by light French galleys maneuvering under oars; but a slight breeze came up and the fleet , under fire from the galleys, started to move towards the French. The Mary Rose suddenly heeled over-perhaps in an effort to come about to bring her guns to bear on the French. She sank within minutes. A large number of skeletons have been found, some on the open weather deck where they were trapped by the anti-boarding net, other below decks. It was clear from their positions and the surrounding weapons that the ship was still in action when she sank. The clothing that has been recovered is mainly the leather or woolen jerkins used by seamen , but some fancy stuff worn by officers has also survived, and a strange picture of foppery has emerged, which jars with the ship&#39;s fighting capacity and her tragic end. An extensive array of personal gear has been recovered including a backgammon board , other gaming KEY WEST BAR PILOTS P.O. Box 848 Key West, Florida 33040 Cable KPILOT Telephone 305-296-5512 or call through Key West

boards, dice, pocket sundials , a manicure set, a housewife (sewing kit), combs, a pomander, razors, herbs and spices, and an array of fresh and preserved foodstuffs. And there is a complete barber&#39;s chest! This is still considererd the most important find, opening a new awareness of Tudor medicine . Study of the men and their clothing and weapons will also lead to a better understanding of Tudor nutrition and hygiene. In the Exhibition Hall guns of startling variety and fineness of finish-the Tudors were a people of the High Renaissance!- speak of an expressive age , sure in its design , confident of its ability to enforce its intentions. But there were so many of them-probably they were the real culprits in the ship&#39;s sinking. It will take years before all the finds are displayed and a coherent picture of a Tudor ship and her crew really emerges . The experts seem very wary of putting anything in print that is not heavily documented, and the samples of finds now on display are tantalizing in what they reveal or suggest. The Mary Rose project has led to vast improvements in technique and in the equipment available to the divers . But the divers emerge as the actual heroes of the operation, almost as single-minded as the crew in their love of the ship. A final contribution of the Mary Rose and her people of today and the distant past is the interest and impetus they have lent to the whole heritage of underwater archaeology . ,i,

Mrs. Barnes, an American living on England&#39;s south coast, is an amateur archaeologist with a particular interest in early British craft.

Croton Point Park on the Hudson

Thi s is Irving John son &#39;s classi c narrative of a passage round Cape Horn in 1929 in the steel bark Peking. A new foreword a nd appendix provide background on the author and the ship. In the new afterword the author look s back, after 48 years of seafaring, to hi s experiences aboard the Peking. 100/o discount to Na ti o na l Society members.