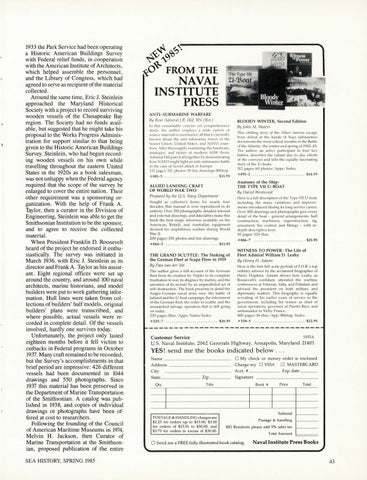 1933 the Park Service had been operating a Historic American Buildings Survey with Federal relief funds, in cooperation with the American Institute of Architects, which helped assemble the personnel , and the Library of Congress, which had agreed to serve as recipient of the material collected. Around the same time, Eric J. Steinlein approached the Maryland Historical Society with a project to record surviving wooden vessels of the Chesapeake Bay region. The Society had no funds available, but suggested that he might take his proposal to the Works Progress Administration for support similar to that being given to the Historic American Buildings Survey. Steinlein, who had begun recording wooden vessels on his own while travelling throughout the eastern United States in the 1920s as a book salesman, was not unhappy when the Federal agency required that the scope of the survey be enlarged to cover the entire nation. Their other requirement was a sponsoring organization. With the help of Frank A. Taylor, then a curator in the Division of Engineering, Steinlein was able to get the Smithsonian Institution to be the sponsor, and to agree to receive the collected material. When President Franklin D. Roosevelt heard of the project he endorsed it enthusiastically. The survey was initiated in March 1936, with Eric J. Steinlein as its director and Frank A. Taylor as his assistant. Eight regional offices were set up around the country, and around 100 naval architects, marine historians, and model builders were put to work gathering information . Hull lines were taken from collections of builders&#39; half models, original builders&#39; plans were transcribed , and where possible, actual vessels were recorded in complete detail. Of the vessels involved, hardly one survives today. Unfortunately, the project only lasted eighteen months before it fell victim to cutbacks in Federal programs in October 1937. Many craft remained to be recorded, but the Survey&#39;s accomplishments in that brief period are impressive: 426 different vessels had been documented in 1044 drawings and 550 photographs. Since 1937 this material has been preserved in the Department of Marine Transportation of the Smithsonian. A catalog was published in 1938, and copies of individual drawings or photographs have been offered at cost to researchers . Following the founding of the Council of American Maritime Museums in 1974, Melvin H. Jackson, then Curator of Marine Transportation at the Smithsonian, proposed publication of the entire SEA HISTORY, SPRING 1985

Anatomy of the Ship : THE TYPE VII U-BOAT

THE GRAND SCUTTLE : The Sinking of the German Fleet at Scapa Flow in 1919