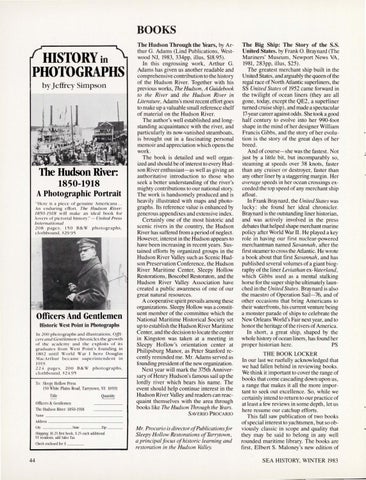 BOOKS The Hudson Through the Years, by Ar-

HISTORYm PHOTOGRAPHS by Jeffrey Simpson I

thu r G. Adams (Lind Publications, Westwood NJ, 1983, 334pp, illus, $18.95) . In this engrossing work, Arthur G. Adams has given us another readable and comprehensive contribution to the history of the Hudson River. Together with his previous works, The Hudson, A Guidebook to the River and the Hudson River in Literature, Adams's most recent effort goes to make up a valuable small reference shelf of material on the Hudson Ri ver. The author's well established and longstanding acquaintance with the river, and part icularl y its now-vanished steamboats, is brought out in a fasc inating personal memoir and appreciation which opens the work . The book is detailed and well organized and should be of interest to every Hudson River enthusiast-as well as giving an authoritative introduction to those who seek a better understanding of the ri ver's mighty contributions to our national story. The wo rk is handsomely produced and is heavily illustrated with maps and photographs. Its reference value is enhanced by generous appendi xes and extensive index . Certainly one of the most histo ric and scenic ri vers in the country, the Hudson River has suffered from a period of neglect. However, interest in the Hudson appears to have been increasing in recent yea rs. Sustai ned efforts by organized groups in the Hudson River Valley such as Scenic Hudson Preservation Conference, the Hudson River Maritime Center, Sleepy Hollow Restorations, Boscobel Restoraton, and the Hudson River Valley Association have created a public awareness of one of our great natu ral resources. A cooperative spirit prevails among these organizations. Sleepy Hollow was a constituent member of the committee which the National Maritime Historical Society set up to establish the Hudson River Maritime Center, and the decision to locate the center in Kingston was taken at a meeting in Sleepy Hollow's orientation center at Ph ilipsburg Mano r, as Pete r Stanford recently reminded me. Mr. Adams served as founding president of the new organization . Next year will mark the 375th Anni versary of Henry Hudson's famous sail up the lordly ri ver which bears his name. The event should help continue interest in the Hudson Ri ver Valley and readers can reacquaint themselves with the area through books like The Hudson Through the ~a rs.

Mr. Procario is director of Publications for Sleepy Hollow Restorations of Tarrytown , a principal focus of historic learning and restoration in the Hudson Valley.

The Big Ship: The Story of the S.S. United States. by Frank 0. Braynard (The Mari ne rs' Museum , Newport News VA , 1981, 283 pp, illus, $25) . The greatest merchant ship built in the United States, and arguably the queen of the regal race of North Atlantic superliners, the SS United States of 1952 came forward in the twilight of ocean liners (they are all gone, today, except the QE2, a supetliner turned cruise ship), and made a spectacular 17-year career against odds. She took a good half century to evolve into her 990-foot shape in the mind of her designer William Francis Gibbs, and the story of he r evolution is the story of the great days of he r breed . And of course-she was the fastest. Not just by a little bit , but incomparabl y so, steaming at speeds over 38 knots, faste r than any cruiser or destroyer, faste r than any other liner by a staggering margin . Her average speeds in her ocean crossings exceeded the top speed of any me rchant ship afl oat. In Frank Bray nard, the United States was lucky: she fo und her ideal chronicler. Bray nard is the outstanding liner historian, and was acti vely involved in the press debates that helped shape merchant marine policy after World War II . He played a key ro le in having our first nuclear-powered merchantman named Sa vannah , afte r the firs t steamer to cross the Atlantic. He wrote a book about that fi rst Sa vannah , and has published several volumes of a giant biography of the liner Leviathan ex- Vaterland, which Gibbs used as a mental stal king horse fo r the super ship he ultimately launched in the United States. Braynard is al so the maes tro of Operation Sail- 76, and of other occasions that bring Americans to the ir waterfronts, his current venture being a monster parade of ships to celebrate the New Orleans World\ Fair next year, and to honor the heritage of the rivers of America. In short , a great ship, shaped by the whole history of ocean liners, has fo und her proper historian here. PS THE BOOK LOCKER In our last we ruefull y acknowledged that we had fa llen behind in reviewing books. We th ink it impo rtant to cover the range of books that come cascading down upon us, a range that makes it all the more important to seek out excellence. So, while we certainly intend to return to our practice of at least a few reviews in some depth , let us here resume our catchup efforts. This fall saw publication of two books of special interest to yachtsmen, but so obviously classic in scope and quality that they m ay be said to belong in any well rounded maritime library. T he books are first, Elbert S. Maloney's new edition of SEA HISlDRY, WINTER 1983