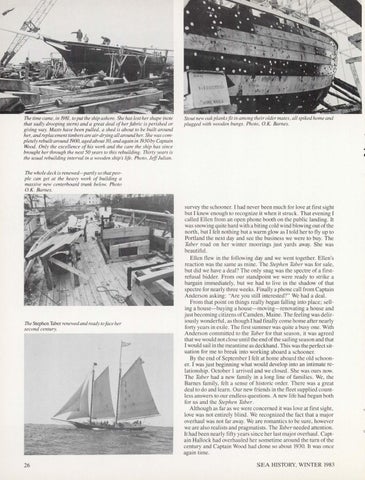 The time came, in 1981, to put the ship ashore. She has lost her shape (note that sadly drooping stern) and a great deal of her fabric is perished or giving way. Masts have been pulled, a shed is about to be built around her, and replacement timbers are air-drying all around her. She was completely rebuilt around 1900, aged about 30, and again in 1930 by Captain Wood. Only the excellence of his work and the care the ship has since brought her through the next 50 years to this rebuilding. Thirty years is the usual rebuilding interval in a wooden ship's life. Photo, Jeff Julian.

The whole deck is renewed-partly so that people can get at the hea vy work of building a massive new centerboard trunk below. Photo OK. Barnes.

The Stephen Taber renewed and ready to face her second century.

survey the schooner. I had never been much for love at first sight but I knew enough to recognize it when it struck. That evening I called Ellen from an open phone booth on the public landing. It was snowing quite hard with a biting cold wind blowing out of the north , but I felt nothing but a warm glow as I told her to fly up to Portland the next day and see the business we were to buy. The Taber road on her winter moorings just yards away. She was beautiful. Ellen flew in the following day and we went together. Ellen's reaction was the same as mine. The Stephen Taber was for sale, but did we have a deal? The only snag was the spectre of a firstrefusal bidder. From our standpoint we were ready to strike a bargain immediately, but we had to live in the shadow of that spectre for nearly three weeks. Finally a phone call from Captain Anderson asking: "Are you still interested?" We had a deal. From that point on things really began falling into place; selling a house-buying a house-moving-renovating a house and just becoming citizens of Camden, Maine. The feeling was deliriously wonderful , as though I had finally come home after nearly forty years in exile. The first summer was quite a busy one. With Anderson committed to the Taber for that season, it was agreed that we would not close until theend of the sailing season and that I would sail in the meantime as deckhand. This was the perfect situation for me to break into working aboard a schooner. By the end of September I felt at home aboard the old schooner. I was just beginning what would develop into an intimate relationship. October I arrived and we closed. She was ours now. The Taber had a new family in a long line of families. We, the Barnes family, felt a sense of historic order. There was a great deal to do and learn. Our new friends in the fleet supplied countless answers to our endless questions. A new life had begun both for us and the Stephen Taber. Although as far as we were concerned it was love at first sight, love was not entirely blind. We recognized the fact that a major overhaul was not far away. We are romantics to be sure, however we are also realists and pragmatists. The Taber needed attention. It had been nearly fifty years since her last major overhaul. Captain Hallock had overhauled her sometime around the turn of the century and Captain Wood had done so about 1930. It was once again time. SEA HISTORY, WINTER 1983