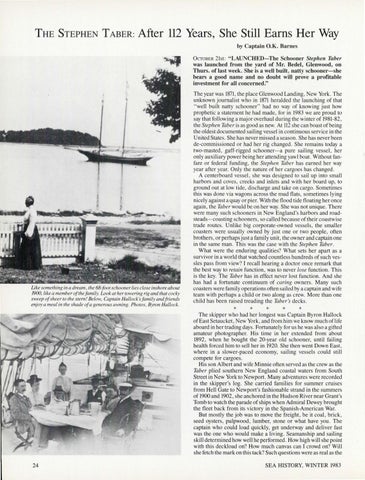 THE STEPHEN TABER: After 112 Years, She Still Earns Her Way by Captain O.K. Barnes OCTOBER 21st: "LAUNCHED-The Schooner Stephen Taber was launched from the yard of Mr. Bede!, Glenwood , on Thurs. of last week. She is a well built, natty schooner-she bears a good name and no doubt will prove a profitable investment for all concerned.''

Like some1hing in a dream , the 68joo1 schooner lies close inshore aboul 1900, like a member of1he family. Look at her1owering rig and that cocky sweep ofsheer to the stern! Below, Captain Hallock's family and friends enjoy a meal in the shade ofa generous awning. Photos, Byron Hallock.

The year was 1871, the place Glenwood Landing, New York. The unknown journalist who in 1871 heralded the launching of that "well built natty schooner" had no way of knowing just how prophetic a statement he had made, for in 1983 we are proud to say that following a major overhaul during the winter of 1981-82 , the Stephen Taber is as good as new. At 112 she can boast of being the oldest documented sailing vessel in continuous service in the United States. She has never missed a season. She has never been de-commissioned or had her rig changed. She remains today a two-masted, gaff-rigged schooner-a pure sailing vessel , her only auxiliary power being her attending yawl boat. Without fanfare or federal funding , the Stephen Taber has earned her way year after year. Only the nature of her cargoes has changed . A centerboard vessel, she was designed to sail up into small harbors and coves , creeks and inlets and with her board up, to ground out at low tide, discharge and take on cargo. Sometimes this was done via wagons across the mud fl ats, sometimes lying nicely against a quay or pier. With the fl ood tide floating her once again , the Taber wou ld be on her way. She was not unique. There were many such schooners in New England's harbors and roadsteads-coasting schooners, so called because of thei r coastw ise trade routes . Unlike big corporate-owned vessels, the smaller coasters were usually owned by just one or two people, often brothers, or perhaps just a family unit , the owner and captain one in the same man . This was the case with the Stephen Taber. What were the enduring qualities? What sets her apart as a survivor in a world that watched countless hundreds of such vessles pass from view? I recall hearing a doctor once remark that the best way to retain function, was to never lose function . This is the key. The Taber has in effect never lost fun ction . And she has had a fortunate continuum of caring owners. Many such coasters were family operations often sailed by a captain and wife team wi th perhaps a child or two along as crew. More than one child has been raised treading the Taber's decks .

The skipper who had he r longest was Captain Byro n Hallock of East Setaucket, New York , and from him we know much ofl ife aboard in her trading days. Fortunately for us he was also a gifted amateur photographer. His time in her extended from about 1892 , when he bought the 20-year old schooner, until failing health forced him to sell her in 1920. She then went Down East , where in a slower-paced economy, sailing vessels could still compete for cargoes . His son Albert and wife Minnie often served as the crew as the Taber plied southern New England coastal waters from South Street in New York to Newport. Many adventures were recorded in the skipper's log. She carried families for summer cruises from Hell Gate to Newport's fashionable strand in the summers of 1900 and 1902 , she anchored in the Hudson Ri ver near Grant's Tomb to watch the parade of ships when Admiral Dewey brought the fl eet back from its victory in the Spanish-American War. But mostly the job was to move the freight, be it coal , brick, seed oysters, pulpwood , lumber, stone or what have you. The captain who could load quickly, get underway and deliver fast was the one who would make a livi ng. Seamanship and sailing skill determined how well he performed . How high will she point with this deckload on? How much canvas can I crowd on? Will she fetch the mark on this tack? Such questions were as real as the