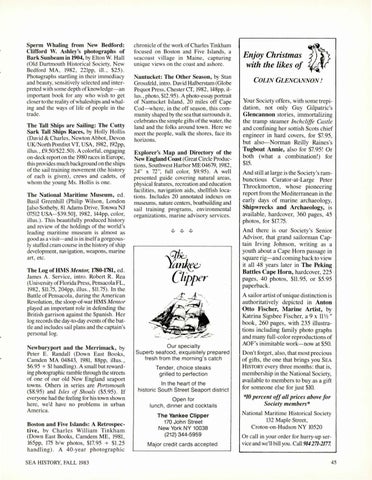 Sperm Whaling from New Bedford: Clifford W. Ashley's photographs of Bark Sunbeam in 1904, by Elton W. Hall (Old Dartmouth Historical Society, New Bedford MA , . 1982 , 22lpp, ill. , $25). Photggraphs startling in their immediacy and beauty, sensitively selected and interpreted with some depth of knowledge-an important book for any who wish to get closer to the real ity ofwhaleships and whaling and the ways of life of people in the trade. The Tall Ships are Sailing: The Cutty Sark Tall Ships Races, by Holly Hollis (David & Charles , Newton Abbot , Devon UK/North Pomfret VT, USA, 1982 , 192pp, illus., ÂŁ9.50/$22.50). A colorful , engaging on-deck report on the 1980 races in Europe, this provides much background on the ships of the sail training movement (the history of each is given), crews and cadets , of whom the young Ms. Hollis is one. The National Maritime Museum, ed. Basil Greenhill (Philip Wilson, London [also Sotheby, 81 Adams Drive, Totowa NJ 07512 USA-$39.50], 1982 , 144pp, color, illus.) . This beautifully produced history and review of the holdings of the world's leading maritime museum is almost as good as a visit-and is in itself a gorgeously stuffed cram course in the history of ship development, navigation , weapons, marine art , etc.

COLIN GLENCANNON ! Your Society offers, with some trepidation , not only Guy Gilpatric's Glencannon stories, immortalizing the tramp steamer lnchcliffe Castle and confining her sottish Scots chief engineer in hard covers, for $7.95, but also-Norman Reilly Raines's Tugboat Annie, also for $7.95! Or both (what a combination!) for $15. And still at large is the Society's rambunctious Curator-at-Large Peter Throckmorton, whose pioneering report from the Mediterranean in the early days of marine archaeology, Shipwrecks and Archaeology, is available, hardcover, 360 pages, 45 photos, for $17.75. And there is our Society's Senior Advisor, that grand sailorman Captain Irving Johnson, writing as a youth about a Cape Horn passage in square rig-and coming back to view it all 48 years later in The Peking Battles Cape Horn, hardcover, 225 pages, 40 photos , $11 .95, or $5.95 paperback .

The L-Og of HMS Mentor, 1780-1781, ed . James A. Service, intro. Robert R. Rea (University of Florida Press, Pensacola FL, 1982, $11 .75, 204pp, illus., $11 .75). In the Battle of Pensacola , during the American Revolution , the sloop-of-war HMS Mentor played an important role in defending the British garrison against the Spanish . Her log records the day-to-day events of the battle and includes sail plans and the captain's personal log. Newburyport and the Merrimack, by Peter E. Randall (Down East Books, Camden MA 04843, 1981, 88pp, illus ., $6.95 + $1 handling) . A small but rewarding photographic ramble through the streets of one of our old New England seaport towns . Others in series are Portsmouth ($8.95) and Isles of Shoals ($5.95) . If everyone had the feeling for his town shown here, we'd have no problems in urban America .

Enjoy Christmas with the likes of

A sailor artist of unique distinction is authoritatively depicted in Anton Otto Fischer, Marine Artist, by Katrina Sigsbee Fischer, a 9 x 11 'h 11 book, 260 pages, with 235 illustrations including family photo graphs and many full-color reproductions of AOF's inimitable work-now at $50.

In the heart of the historic South Street Seaport district

Don't forget, also, that most precious of gifts, the one that brings you SEA HISTORY every three months: that is, membership in the National Society, available to members to buy as a gift for someone else for just $10.

Open for lunch , dinner and cocktails

*10 percent off all prices above for Society members*