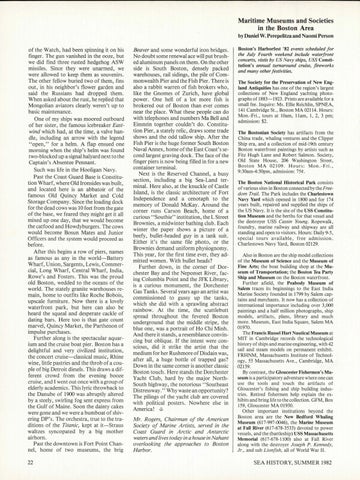 Maritime Museums and Societies in the Boston Area by Daniel W. Perepelitza and Naomi Person of the Watch, had been spinning it on his finger. The gun vanished in the ooze, but we did find three rusted hedgehog ASW missiles. Since they were unarmed, we were allowed to keep them as souvenirs. The other fellow buried two of them, fins out, in his neighbor&#39;s flower garden and said the Russians had dropped them. When asked about the rust, he replied that Mongolian aviators clearly weren&#39;t up to basic maintenance. One of my ships was moored outboard of her sister, the famous icebreaker Eastwind which had, at the time, a valve handle, including an arrow with the legend &quot;open,&quot; for a helm. A flap ensued one morning when the ship&#39;s helm was found two-blocked up a signal halyard next to the Captain&#39;s Absentee Pennant. Such was life in the Hooligan Navy. Past the Coast Guard Base is Constitution Wharf, where Old Ironsides was built, and located here is an abbatoir of the famous Old Quincy Market and Cold Storage Company. Since the loading dock for the dead cows was 10 feet from the gate of the base, we feared they might get it all mixed up one day, that we would become the catfood and Howdyburgers. The cows would become Bosun Mates and Junior Officers and the system would proceed as before. After this begins a row of piers, names as famous as any in the world-Battery Wharf, Union, Sargents, Lewis, Commercial, Long Wharf, Central Wharf, India, Rowe&#39;s and Fosters. This was the proud old Boston, wedded to the oceans of the world. The stately granite warehouses remain, home to outfits like Roche Bobois, upscale furniture. Now there is a lovely waterfront park, but here can also be heard the squeal and desperate cackle of dating bars . Here too is that gate count marvel, Quincy Market, the Parthenon of impulse purchases. Further along is the spectacular aquarium and the cruise boat pier. Boston has a delightful and very civilized institution, the concert cruise-classical music, Rhine wine, little pastries and the throb of a couple of big Detroit diesels . This draws a different crowd from the evening booze cruise, and I went out once with a group of elderly academics. This lyric throwback to the Danube of 1900 was abruptly altered by a steely, swirling fog sent express from the Gulf of Maine. Soon the dainty cakes were gone and we were a bum boat of shivering DP&#39;s. The orchestra, true to the traditions of the Titanic, kept at it-Straus waltzes syncopated by a big mother air horn. Past the downtown is Fort Point Channel, home of two museums, the brig 22

Beaver and some wonderful iron bridges. No doubt some renewal ace will put brushed aluminum panels on them . On the other side is South Boston, densely packed warehouses, rail sidings, the pile of Commonwealth Pier and the Fish Pier. There is also a rabbit warren of fish brokers who, like the Gnomes of Zurich, have global power. One hell of a lot more fish is brokered out of Boston than ever comes near the place. What these people can do with telephones and numbers Ma Bell and Einstein together couldn&#39;t do. Constitution Pier, a stately relic, draws some trade shows and the odd tallow ship. After the Fish Pier is the huge former South Boston Naval Annex, home of the East Coast&#39;s second largest graving dock. The face of the finger piers is now being filled in for a new container terminal . Next is the Reserved Channel, a busy section, including a big Sea-Land terminal. Here also, at the knuckle of Castle Island, is the classic architecture of Fort Independence and a cenotaph to the memory of Donald McKay. Around the corner runs Carson Beach, home of a curious &quot;Southie&quot; institution, the L Street Brownies, a midwinter bathing club. Each winter the paper shows a picture of a beefy, bullet-headed guy in a tank suit. Either it&#39;s the same file photo, or the Brownies demand uniform physiognomy. This year, for the first time ever, they admitted women. With bullet heads? Further down, in the corner of Dorchester Bay and the Neponset River, facing Columbia Point and the JFK Library, is a curious monument, the Dorchester Gas Tanks. Several years ago an artist was commissioned to gussy up the tanks, which she did with a sprawling abstract rainbow. At the time, the scuttlebutt spread throughout the fevered Boston underground that the middle stripe, the blue one, was a portrait of Ho Chi Minh . And there it stands, a resemblance convincing but oblique. If the intent were conscious, did it strike the artist that the medium for her Rushmore of Disdain was, after all, a huge bottle of trapped gas? Down in the same corner is another classic Boston touch . Here stands the Dorchester Yacht Club, hard by the major NorthSouth highway, the notorious &quot;Southeast Distressway.&quot; Why waste an opportunity? The pilings of the yacht club are covered with political posters . Nowhere else in America! .t

Mr. Rogers, Chairman of the American Society of Marine Artists, served in the Coast Guard in Arctic and Antarctic waters and lives today in a house in Nahant overlooking the approaches to Boston Harbor.

Boston&#39;s Harborfest &#39;82 events scheduled for the July Fourth weekend include waterfront &#39; concerts, vistis by US Navy ships, USS Constitution&#39;s annual turnaround cruise, fireworks and many other festivities. The Society for the Preservation of New England Antiquities has one of the region&#39;s largest collections of New England yachting photographs of 1883-1923 . Prints are available for a small fee . Inquire: Ms. Ellie Reichlin, SPNEA, 141 Cambridge St., Boston MA 02114. Hours: Mon.-Fri., tours at !Oam, I lam, 1, 2, 3 pm; admission: $2. The Bostonian Society has artifacts from the China trade, whaling ventures and the Clipper Ship era, and a collection of mid-19th century Boston waterfront paintings by artists such as Fitz Hugh Lane and Robert Salmon. Society, Old State House, 206 Washington Street, Boston MA 02109. Hour s: Mon .-Fri., 9:30am-4:30pm, admission: 75Q:. The Boston National Historical Park consists of various sites in Boston connected by the Freedom Trail. The Park includes the Charlestown Navy Yard which opened in 1800 and for 174 years built, repaired and supplied the ships of the US Navy. It is the site of the USS Constitution Museum and the berths for that vessel and the destroyer USS Cassin Young . Ropewalk, foundry, marine railway and shipway are all standing and open to visitors. Hours: Daily 9-5, special tours available, free admission. Charlestown Navy Yard, Boston 02129. Also in Boston are the ship model collections of the Museum of Science and the Museum of Fine Arts; the boat building shop at the Museum of Transportation; the Boston Tea Party Ship and Museum on the Boston waterfront. Further afield , the Peabody Museum of Salem traces its beginnings to the East India Marine Society founded in 1799 by Salem captains and merchants. It now has a collection of international importance including over 3,000 paintings and a half million photographs, ship models, artifacts, plans, library and much more. Museum, East India Square, Salem MA 01970. The Francis Russel Hart Nautical Museum at MIT in Cambridge records the technological history of ships and marine engineering, with 42 sail and steam models on permanent &#39;exhibit. FRHNM, Massachusetts Institute of Technology, 55 Massachusetts Ave., Cambridge, MA 02139. By contrast, the Gloucester Fishermen&#39;s Museum is a participatory adventure where one can use the tools and touch the artifacts of Gloucester&#39;s fishing and ship building industries . Retired fishermen help explain the exhibits and bring life to the collection. GFM, Box 159, Gloucester MA 01930. Other important institutions beyond the Boston area are the New Bedford Whaling Museum (617-997-0046), the Marine Museum at Fall River (617-678-3533) devoted to power vessels, and the (battleship) USS Massachusetts Memorial (617-678-1100) also at Fall River along with the destroyer Joseph P. Kennedy, Jr., and sub Lionfish, all of World War II. SEA HISTORY, SUMMER 1982