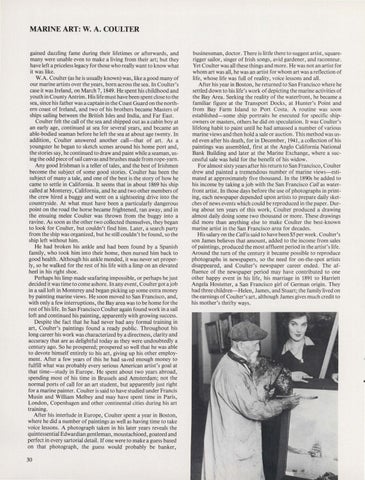 MARINEART:W.A.COULTER gained dazzling fame during their lifetimes or afterwards, and many were unable even to make a living from their art; but they have left a priceless legacy for those who really want to know what it was like. W.A. Coulter (as he is usually known) was, like a good many of our marine artists over the years, born across the sea. In Coulter's case it was Ireland, on March 7, 1849. He spent his childhood and youth in County Antrim. His life must have been spent close to the sea, since his father was a captain in the Coast Guard on the northern coast of Ireland, and two of his brothers became Masters of ships sailing between the British Isles and India, and Far East. Coulter felt the call of the sea and shipped out as a cabin boy at an early age, continued at sea for several years, and became an able-bodied seaman before he left the sea at about age twenty. In addition, Coulter answered another call-that of art. As a youngster he began to sketch scenes around his home port and, the stories say, he continued to draw and paint while a seaman, using the odd piece of sail canvas and brushes made from rope-yam. Any good Irishman is a teller of tales, and the best of Irishmen become the subject of some good stories. Coulter has been the subject of many a tale, and one of the best is the story of how he came to settle in California. It seems that in about 1869 his ship called at Monterey, California, and he and two other members of the crew hired a buggy and went on a sightseeing drive into the countryside. At what must have been a particularly dangerous point on the road the horse became frightened, ran away, and in the ensuing melee Coulter was thrown from the buggy into a ravine. As soon as the other two collected themselves, they began to look for Coulter, but couldn't find him. Later, a search party from the ship was organized, but he still couldn't be found, so the ship left without him. He had broken his ankle and had been found by a Spanish family, who took him into their home, then nursed him back to good health. Although his ankle mended, it was never set properly, so he walked for the rest of his life with a limp on an elevated heel in his right shoe. Perhaps his limp made seafaring impossible, or perhaps he just decided it was time to come ashore. In any event, Coulter got a job in a sail loft in Monterey and began picking up some extra money by painting marine views. He soon moved to San Francisco, and, with only a few interruptions, the Bay area was to be home for the rest of his life. In San Francisco Coulter again found work in a sail loft and continued his painting, apparently with growing success. Despite the fact that he had never had any formal training in art, Coulter's paintings found a ready public. Throughout his long career his work was characterized by a directness, clarity and accuracy that are as delightful today as they were undoubtedly a century ago. So he prospered; prospered so well that he was able to devote himself entirely to his art, giving up his other employment. After a few years of this he had saved enough money to fulfill what was probably every serious American artist's goal at that time-study in Europe. He spent about two years abroad, spending most of his time in Brussels and Amsterdam; not the normal ports of call for an art student, but apparently just right for a marine painter. Coulter is said to have studied under Francis Musin and William Melbey and may have spent time in Paris, London, Copenhagen and other continental cities during his art training. After his interlude in Europe, Coulter spent a year in Boston, where he did a number of paintings as well as having time to take voice lessons. A photograph taken in his later years reveals the quintessential Edwardian gentleman, moustachioed, goateed and perfect in every sartorial detail. If one were to make a guess based on that photograph, the guess would probably be banker,

businessman, doctor. There is little there to suggest artist, squarerigger sailor, singer of Irish songs, avid gardener, and raconteur. Yet Coulter was all these things and more. He was not an artist for whom art was all, he was an artist for whom art was a reflection of life, whose life was full of reality, voice lessons and all. After his year in Boston , he returned to San Francisco where he settled down to his life's work of depicting the marine activities of the Bay Area. Seeking the reality of the waterfront, he became a familiar figure at the Transport Docks, at Hunter's Point and from Bay Farm Island to Port Costa. A routine was soon established-some ship portraits he executed for specific shipowners or masters, others he did on speculation. It was Coulter's lifelong habit to paint until he had amassed a number of various marine views and then hold a sale or auction. This method was used even after his death, for in December, 1941, a collection of his paintings was assembled, first at the Anglo California National Bank Building and later at the Marine Exchange, where a successful sale was held for the benefit of his widow. For almost sixty years after his return to San Francisco, Coulter drew and painted a tremendous number of marine views-estimated at approximately five thousand. In the 1890s he added to his income by taking a job with the San Francisco Call as waterfront artist. In those days before the use of photographs in printing, each newspaper depended upon artists to prepare daily sketches of news events which could be reproduced in the paper. During about ten years of this work, Coulter produced a drawing almost daily doing some two thousand or more. These drawings did more than anything else to make Coulter the best-known marine artist in the San Francisco area for decades. His salary on the Callis said to have been $5 per week. Coulter's son James believes that amount, added to the income from sales of paintings, produced the most affluent period in the artist's life. Around the turn of the century it became possible to reproduce photographs in newspapers, so the need for on-the-spot artists disappeared, and Coulter's newspaper career ended. The affluence of the newspaper period may have contributed to one other happy event in his life, his marriage in 1891 to Harriett Angela Hostetter, a San Francisco girl of German origin. They had three children-Helen, James, and Stuart; the family lived on the earnings of Coulter's art, although James gives much credit to his mother's thrifty ways.