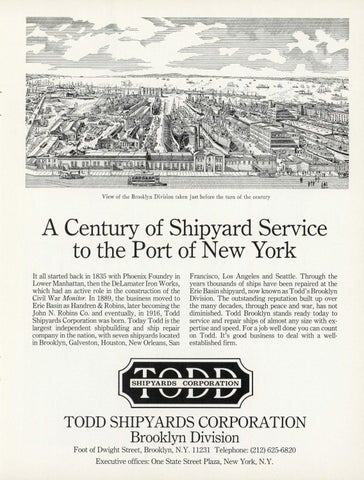 A Century of Shipyard Service to the Port of New York It all started back in 1835 with Phoenix Foundry in Lower Manhattan, then the DeLamater Iron Works, which had an active role in the construction of the Civil War Monitor. In 1889, the business moved to Erie Basin as Handren & Robins, later becoming the John N. Robins Co. and eventually, in 1916, Todd Shipyards Corporation was born. Today Todd is the largest independent shipbuilding and ship repair company in the nation, with seven shipyards located in Brooklyn, Galveston, Houston, New Orleans, San

Francisco, Los Angeles and Seattle. Through the years thousands of ships have been repaired at the Erie Basin shipyard, now known as Todd's Brooklyn Division. The outstanding reputation built up over the many decades, through peace and war, has not diminished. Todd Brooklyn stands ready today to service and repair ships of almost any size with expertise and speed. For a job well done you can count on Todd. It's good business to deal with a wellestablished firm.