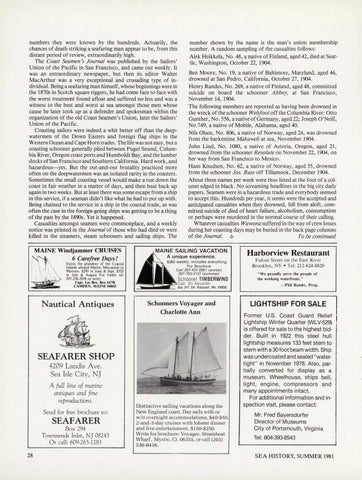 numbers they were known by the hundreds. Actuarily, the chances of death striking a seafaring man appear to be, from this distant period of review, extraordinarily high. The Coast Seamen's Journal was published by the Sailors' Union of the Pacific in San Francisco, and came out weekly. It was an extraordinary newspaper, but then its editor Walter MacArthur was a very exceptional and crusading type of individual. Being a seafaring man himself, whose beginnings were in the 1870s in Scotch square riggers, he had come face to face with the worst treatment found afloat and suffered no less and was a witness to the best and worst at sea amongst those men whose cause he later took up as a defender and spokesman within the organization of the old Coast Seamen's Union, later the Sailors' Union of the Pacific. Coasting sailors were indeed a whit better off than the deepwatermen of the Down Easters and foreign flag ships in the Western Ocean and Cape Horn trades. The life was not easy, but a coasting schooner generally plied between Puget Sound, Columbia River, Oregon coast ports and Humboldt Bay, and the lumber docks of San Francisco and Southern California. Hard work, and hazardous-yes. But the out-and-out brutality practiced more often on the deepwatermen was an isolated rarity in the coasters. Sometimes the small coasting vessel would make a run down the coast in fair weather in a matter of days, and then beat back up again in two weeks. But at least there was some escape from a ship in this service, if a seaman didn't like what he had to put up with. Being chained to the service in a ship in the coastal trade, as was often the case in the foreign-going ships was getting to be a thing of the past by the 1890s. Yet it happened. Casualties amongst seamen were commonplace, and a weekly notice was printed in the Journal of those who had died or were killed in the steamers, steam schooners and sailing ships. The

number shown by the name is the man's union membership number. A random sampling of the casualties follows: Alek Heikkela, No. 48, a native of Finland, aged 42, died at Seattle, Washington, October 22, 1904. Ben Moore, No . 19, a native of Baltimore, Maryland, aged 46, drowned at San Pedro, California, October 27, 1904. Henry Randes, No. 269, a native of Finland, aged 48, committed suicide on board the schooner Abbey, at San Francisco, November 14, 1904. The following members are reported as having been drowned in the wreck of the schooner Webfoot off the Columbia River: Otto Gunther, No. 556, a native of Germany, aged 22; Joseph O'Neill, No.749, a native of Mobile, Alabama, aged 40. Nils Olsen, No. 806, a native of Norway, aged 24, was drowned from the barkentine Makaweli at sea, November 1904. John Lind, No. 1080, a native of Astoria, Oregon, aged 21, drowned from the schooner Resolute on November 22, 1904, on her way from San Francisco to Mexico. Hans Knudsen, No. 62, a native of Norway, aged 35, drowned from the schooner Jos. Russ off Tillamook, December 1904. About three names per week were thus listed at the foot of a column edged in black. No screaming headlines in the big city daily papers. Seamen were in a hazardous trade and everybody seemed to accept this. Hundreds per year, it seems were the accepted and anticipated casualties when they drowned, fell from aloft, committed suicide of died of heart failure, alcoholism, consumption or perhaps were murdered in the normal course of their calling. Whatever casualties Wawona suffered in the way of crew losses during her coasting days may be buried in the back page columns of the Journal. ..V To be continued