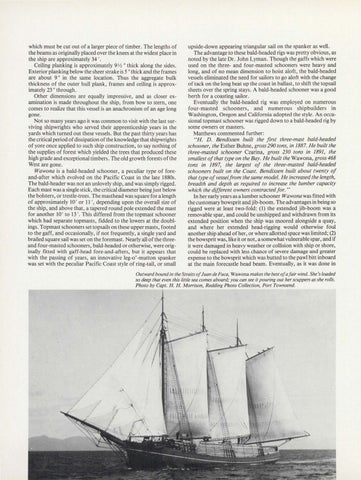 which must be cut out of a larger piece of timber. The lengths of the beams as originally placed over the knees at the widest place in the ship are approximately 34 '. Ceiling planking is approximately 9Yi 11 thick along the sides. Exterior planking below the sheer strake is 5 11 thick and the frames are about 9 11 in the same location. Thus the aggregate bulk thickness of the outer hull plank, frames and ceiling is approximately 23 11 through. Other dimensions are equally impressive, and as closer examination is made throughout the ship, from bow to stern, one comes to realize that this vessel is an anachronism of an age long gone. Not so many years ago it was common to visit with the last surviving shipwrights who served their apprenticeship years in the yards which turned out these vessels. But the past thirty years has the critical period of dissipation of the knowledge that shipwrights of yore once applied to such ship construction, to say nothing of the supplies of forest which yielded the trees that produced these high grade and exceptional timbers. The old growth forests of the West are gone. Wawona is a bald-headed schooner, a peculiar type of foreand-after which evolved on the Pacific Coast in the late 1880s. The bald-header was not an unlovely ship, and was simply rigged. Each mast was a single stick, the critical diameter being just below the bolsters, or trestle-trees. The masthead was square for a length of approximately 10' or 11 ', depending upon the overall size of the ship, and above that, a tapered round pole extended the mast for another 10' to 13 '. This differed from the topmast schooner which had separate topmasts, fidded to the lowers at the doublings. Topmast schooners set topsails on these upper masts, footed to the gaff, and occasionally, if not frequently, a single yard and brailed square sail was set on the foremast. Nearly all of the threeand four-masted schooners, bald-headed or otherwise, were originally fitted with gaff-head fore-and-afters, but it appears that with the passing of years, an innovative leg-o' -mutton spanker was set with the peculiar Pacific Coast style of ring-tail, or small

upside-down appearing triangular sail on the spanker as well. The advantage to these bald-headed rigs was pretty obvious, as noted by the late Dr. John Lyman. Though the gaffs which were used on the three- and four-masted schooners were heavy and long, and of no mean dimension to hoist aloft, the bald-headed vessels eliminated the need for sailors to go aloft with the change of tack on the long beat up the coast in ballast, to shift the topsail sheets over the spring stays. A bald-headed schooner was a good berth for a coasting sailor. Eventually the bald-headed rig was employed on numerous four-masted schooners, and numerous shipbuilders in Washington, Oregon and California adopted the style. An occasional topmast schooner was rigged down to a bald-headed rig by some owners or masters. Matthews commented further: "H. D. Bendixsen built the first three-mast bald-headed schooner, the Esther Buhne, gross 290 tons, in 1887. He built the three-masted schooner Czarina, gross 230 tons in 1891, the smallest of that type on the Bay. He built the Wawona, gross 468

tons in 1897, the largest of the three-masted bald-headed schooners built on the Coast. Bendixsen built about twenty of that type of vesselfrom the same model. He increased the length, breadth and depth as required to increase the lumber capacity which the different owners contracted for." In her early years as a lumber schooner Wawonawas fitted with the customary bowsprit and jib-boom. The advantages in being so rigged were at least two-fold: (!) the extended jib-boom was a removable spar, and could be unshipped and withdrawn from its extended position when the ship was moored alongside a quay, and where her extended head-rigging would otherwise foul another ship ahead of her, or where allotted space was limited; (2) the bowsprit was, like it or not, a somewhat vulnerable spar, and if it were damaged in heavy weather or collision with ship or shore, could be replaced with less chance of severe damage and greater expense to the bowsprit which was butted to the pawl bitt inboard at the main forecastle head beam. Everitually, as it was done in

Outward bound in the Straits of Juan de Fuca, Wawona makes the best of a/air wind. She's loaded so deep that even this little sea comes aboard; you can see it pouring out her scuppers as she rolls. Photo by Capt. H. H. Morrison, Redding Photo Collection, Port Townsend.