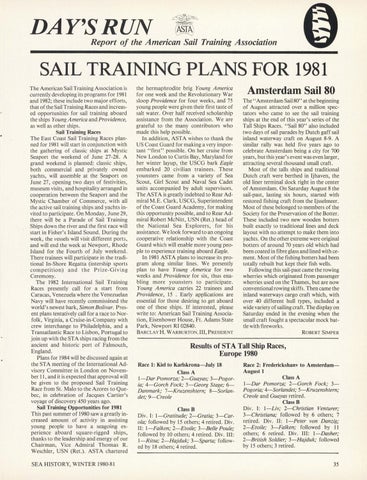 DAY'SReport RUN of the American Sail Training Association SAIL TRAINING PLANS FOR 1981 The American Sail Training Association is currently developing its programs for 1981 and 1982; these include two major efforts, that of the Sail Training Races and increased opportunities for sail training aboard the ships Young America and Providence, as well as other ships. Sail Training Races The East Coast Sail Training Races planned for 1981 will start in conjunction with the gathering of classic ships at Mystic Seaport the weekend of June 27-28 . A grand weekend is planned: classic ships, both commercial and privately owned yachts, will assemble at the Seaport on June 27, opening two days of festivities, museum visits, and hospitality arranged in cooperation between the Seaport and the Mystic Chamber of Commerce, wi th all the active sail training ships and yachts invited to participate. On Monday, June 29, there will be a Parade of Sail Training Ships down the river and the first race will start in Fisher's Island Sound. During the week, the vessels will visit different ports, and will end the week at Newport, Rhode Island for the Fourth of July weekend . There trainees will participate in the traditional In-Shore Regatta (intership sports competition) and the Pri ze-Giving Ceremony. The 1982 International Sail Training Races presently call for a start from Caracas, Venezuela where the Venezuelan Navy will have recently commissined the world's newest bark, Simon Bolivar. Present plans tentatively call for a race to Norfolk, Virginia, a Cruise-in-Company with crew interchange to Philadelphia, and a Transatlantic Race to Lisbon, Portugal to join up with the STA ships racing from the ancient and historic port of Falmouth , England. Plans for 1984 will be discussed again at the STA meeting of the International Advisory Committee in London on November 11, and it is expected that approval will be given to the proposed Sail Training Race from St. Malo to the Azores to Quebec, in celebration of Jacques Cartier's voyage of discovery 450 years ago. Sail Training Opportunities for 1981 This past summer of 1980 saw a greatly increased amount of activity in assisting young people to have a seagoing experience aboard square-rigged ships, thanks to the leadership and energy of our Chairman, Vice Admiral Thomas R. Weschler, USN (Ret.). ASTA chartered SEA HISTORY, WINTER 1980-81

the hermaphrodite brig Young America for one week and the Revolutionary War sloop Providence for four weeks, and 75 young people were given their first taste of salt water. Over half received scholarship assistance from the Association . We are grateful to the many contributors who made this help possible. In addition, AST A wishes to thank the US Coast Guard for making a very important "first" possible . On her cruise from New London to Curtis Bay, Maryland for her winter layup, the USCG bark Eagle embarked 20 civilian trainees . These younsters came from a variety of Sea Scout, Girl Scout and Naval Sea Cadet units accompanied by adult supervisors. The ASTA is greatly indebted to Rear Admiral M.E. Clark, USCG, Superintendent of the Coast Guard Academy, for making this opportunity possible, and to Rear Admiral Robert McNitt, USN (Ret.) head of the National Sea Explorers, for his assistance. We look forward to an ongoing cooperative relationship with the Coast Guard which will enable more young people to experience training aboard Eagle. In 1981 ASTA plans to increase its program along similar lines. We presently plan to have Young America for two weeks and Providence for six, thus enabling more younsters to participate. Young America carries 22 trainees and Providence, 15 . Early applications are essential for those desiring to get aboard one of these ships. If interested, please write to: American Sail Training Association, Eisenhower House, Ft. Adams State Park, Newport RI 02840. BARCLAY H. WARBURTON , III, PRESIDENT

Amsterdam Sail 80 The'' Amsterdam Sail 80'' at the beginning of August attracted over a million spectators who came to see the sail training ships at the end of this year's series of the Tall Ships Races. "Sail 80" also included two days of sail parades by Dutch gaff sail inland waterway craft on August 8-9. A similar rally was held five years ago to celebrate Amsterdam being a city for 700 years, but this year's event was even larger, attracting several thousand small craft. Most of the tails ships and traditional Dutch craft were berthed in Ijhaven, the old liner terminal dock right in the center of Amsterdam . On Saturday August 8 the sail-past, lasting six hours, started with restored fishing craft from the Ijsselmeer. Most of these belonged to members of the Society for the Preservation of the Batter. These included two new wooden batters built exactly to traditional lines and deck layout with no attempt to make them into yachts. On the other extreme were original batters of around 70 years old which had been coated in fibre glass and lined with cement. Most of the fishing batters had been totally rebuilt but kept their fish wells. Following this sail-past came the rowing wherries which originated from passenger wherries used on the Thames, but are now conventional rowing skiffs. Then came the inland waterways cargo craft which, with over 40 different hull types, included a wide variety of sailing craft. The display on Saturday ended in the evening when the small craft fought a spectacular mock battle with fireworks . ROBERT SIMPER