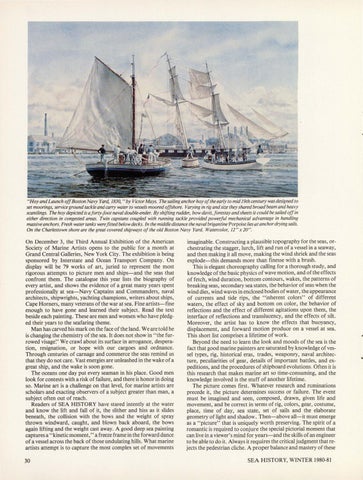 "Hoy and Launch off Boston Navy Yard, 1830, "by Victor Mays. The sailing anchor hoy of the early to mid 19th century was designed to set moorings, service ground tackle and carry water to vessels moored offshore. Varying in rig and size they shared broad beam and heavy scantlings. The hoy depicted is a forty-foot naval double-ender. By shifting rudder, bow davit, forestay and sheets it could be sailed off in either direction in congested areas. Twin capstans coupled with running tackle provided powerful mechanical advantage in handling massive anchors. Fresh water tanks were fitted below decks. In the middle distance the naval brigantine Porpoise lies at anchor drying sails. On the Charlestown shore are the great covered shipways of the old Boston Navy Yard. Watercolor, 12" x 20".

On December 3, the Third Annual Exhibition of the American Society of Marine Artists opens to the public for a month at Grand Central Galleries, New York City. The exhibition is being sponsored by Interstate and Ocean Transport Company. On display will be 79 works of art, juried to represent the most rigorous attempts to picture men and ships-and the seas that confront them. The catalogue this year lists the biography of every artist, and shows the evidence of a great many years spent professionally at sea-Navy Captains and Commanders, naval architects, shipwrights, yachting champions, writers about ships, Cape Homers, many veterans of the war at sea. Fine artists-fine enough to have gone and learned their subject. Read the text beside each painting. These are men and women who have pledged their years to the seafaring theme. Man has carved his mark on the face of the land. We are told he is changing the chemistry of the sea. It does not show in "the furrowed visage:â&#x20AC;˘ We crawl about its surface in arrogance, desperation, resignation, or hope with our cargoes and ordnance. Through centuries of carnage and commerce the seas remind us that they do not care. Vast energies are unleashed in the wake of a great ship, and the wake is soon gone. The oceans one day put every seaman in his place. Good men look for contests with a risk of failure, and there is honor in doing so. Marine art is a challenge on that level, for marine artists are scholars and exacting observers of a subject greater than man, a subject often out of reach. Readers of SEA HISTORY have stared intently at the water and know the lift and fall of it, the slither and hiss as it slides beneath, the collision with the bows and the weight of spray thrown windward, caught, and blown back aboard, the bows again lifting and the weight cast away. A good deep sea painting captures a "kinetic moment," a freeze frame in the forward dance of a vessel across the back of those undulating hills. What marine artists attempt is to capture the most complex set of movements

imaginable. Constructing a plausible topography for the seas, orchestrating the stagger, lurch, lift and run of a vessel in a seaway, and then making it all move, making the wind shriek and the seas explode-this demands more than finesse with a brush. This is elegant choreography calling for a thorough study, and knowledge of the basic physics of wave motion, and of the effects of fetch, wind duration, bottom contours, wakes, the patterns of breaking seas, secondary sea states, the behavior of seas when the wind dies, wind waves in enclosed bodies of water, the appearance of currents and tide rips, the "inherent colors" of different waters, the effect of sky and bottom on color, the behavior of reflections and the effect of different agitations upon them, the interface of reflections and translucency, and the effects of silt. Moreover, the artist has to know the effects that buoyancy, displacement, and forward motion produce on a vessel at sea. This short list comprises a lifetime of work. Beyond the need to learn the look and moods of the sea is the fact that good marine painters are saturated by knowledge of vessel types, rig, historical eras, trades, weaponry, naval architecture, peculiarities of gear, details of important battles, and expeditions, and the procedures of shipboard evolutions. Often it is this research that makes marine art so time-consuming, and the knowledge involved is the stuff of another lifetime. The picture comes first. Whatever research and ruminations precede it, the picture determines success or failure. The event must be imagined and seen, composed, drawn, given life and movement, and be correct in terms of rig, colors, gear, costume, place, time of day, sea state, set of sails and the elaborate geometry of light and shadow. Then-above all-it must emerge as a "picture" that is uniquely worth preserving. The spirit of a romantic is required to conjure the special pictorial moment that can live in a viewer's mind for years-and the skills of an engineer to be able to do it. Always it requires the critical judgment that rejects the pedestrian cliche. A proper balance and mastery of these SEA HISTORY, WINTER 1980-81