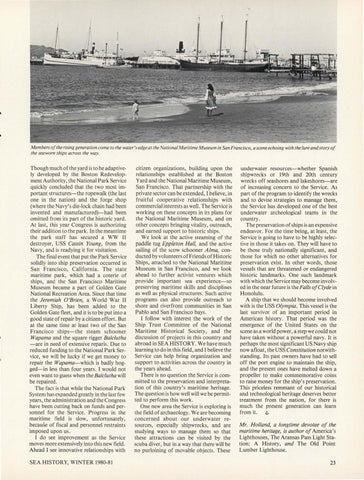 Members of the rising generation come to the water's edge at the National Maritime Museum in San Francisco, a scene echoing with the lure and story of the sea worn ships across the way. Though much of the yard is to be adaptively developed by the Boston Redevelopment Authority, the National Park Service quickly concluded that the two most important structures-the ropewalk (the last one in the nation) and the forge shop (where the Navy's die-lock chain had been invented and manufactured)-had been omitted from its part of the historic yard. At last, this year Congress is authorizing their addition to the park. In the meantime the park staff has secured a WW II destroyer, USS Cassin Young, from the Navy, and is readying it for visitation. The final event that put the Park Service solidly into ship preservation occurred in San Francisco, California. The state maritime park, which had a coterie of ships, and the San Francisco Maritime Museum became a part of Golden Gate National Recreation Area. Since that time the Jeremiah O'Brien, a World War II Liberty Ship, has been added to the Golden Gate fleet, and it is to be put into a good state of repair by a citizen effort. But at the same time at least two of the San Francisco ships-the steam schooner Wapama and the square rigger Balclutha -are in need of extensive reparis. Due to reduced funding to the National Park Service, we will be lucky if we get money to repair the Wapama-which is badly hogged-in less than four years. I would not even want to guess when the Balclutha will be repaired. The fact is that while the National Park System has expanded greatly in the last few years, the administration and the Congress have been cutting back on funds and personnel for the Service. Progress in the maritime field is slow, unfortunately, because of fiscal and personnel restraints imposed upon us. I do see improvement as the Service moves more extensively into this new field. Ahead I see innovative relationships with SEA HISTORY, WINTER 1980-81

citizen organizations, building upon the relationships established at the Boston Yard and the National Maritime Museum, San Francisco. That partnership with the private sector can be extended, I believe, in fruitful cooperative relationships with commercial interests as well. The Service is working on these concepts in its plans for the National Maritime Museum, and on other concepts bringing vitality, outreach, and earned support to historic ships. We look at the active steaming of the paddle tug Eppleton Hall, and the active sailing of the scow schooner Alma, conducted by volunteers of Friends of Historic Ships, attached to the National Maritime Museum in San Francisco, and we look ahead to further activist ventures which provide important sea experience-so preserving maritime skills and disciplines as well as physical structures. Such active programs can also provide outreach to shore and riverfront communities in San Pablo and San Francisco bays. I follow with interest the work of the Ship Trust Committee of the National Maritime Historical Society, and the discussion of projects in this country and abroad in SEA HISTORY. Wehavemuch learning to do in this field, and I believe the Service can help bring organization and support to activities across the country in the years ahead. There is no question the Service is committed to the preservation and interpretation of this country's maritime heritage. The question is how well will we be permitted to perform this work. One new area the Service is exploring is the field of archaeology. We are becoming concerned about our underwater resources, especially shipwrecks, and are studying ways to manage them so that these attractions can be visited by the scuba diver, but in a way that there will be no purloining of movable objects. These

underwater resources-whether Spanish shipwrecks or 19th and 20th century wrecks off seashores and lakeshores-are of increasing concern to the Service. As part of the program to identify the wrecks and to devise strategies to manage them, the Service has developed one of the best underwater archeological teams in the country. The preservation of ships is an expensive endeavor. For the time being, at least, the Service is going to have to be highly selective in those it takes on. They will have to be those truly nationally significant, and those for which no other alternatives for preservation exist. In other words, those vessels that are threatened or endangered historic landmarks. One such landmark with which the Service may become involved in the near future is the Falls of Clyde in Honolulu. A ship that we should become involved with is the USS Olympia. This vessel is the last survivor of an important period in American history. That period was the emergence of the United States on the scene as a world power, a step we could not have taken without a powerful navy. It is perhaps the most significant US Navy ship now afloat, the USS Constitution notwithstanding. Its past owners have had to sell off the port engine to maintain the ship, and the present ones have melted down a propeller to make commemorative coins to raise money for the ship's preservation. This priceless remmant of our historical and technological heritage deserves better treatment from the nation, for there is much the present generation can learn from it. w

Mr. Holland, a longtime devotee of the maritime heritage, is author of America's Lighthouses, The Aransas Pass Light Station: A History, and The Old Point Lumber Lighthouse. 23