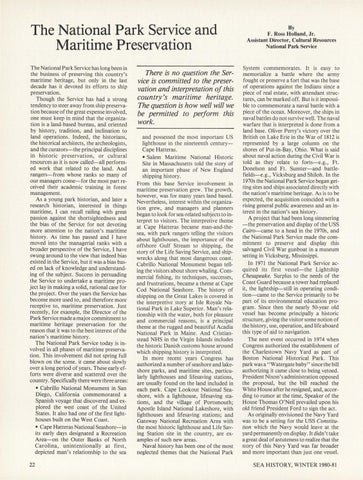 The National Park Service and Maritime Preservation The National Park Service has long been in the business of preserving this country's maritime heritage, but only in the last decade has it devoted its efforts to ship preservation. Though the Service has had a strong tendency to steer away from ship preservation because of the great expense involved, one must keep in mind that the organization is a land-based bureau, and oriented by history, tradition, and inclination to land operations. Indeed, the historians, the historical architects, the archeologists, and the curators-the principal disciplines in historic preservation, or cultural resources as it is now called-all performed work that related to the land. And rangers-from whose ranks so many of our managers come-for the most part received their academic training in forest management. As a young park historian, and later a research historian, interested in things maritime, I can recall railing with great passion against the shortsightedness and the bias of the Service for not devoting more attention to the nation's maritime history. As time has passed and I have moved into the managerial ranks with a broader perspective of the Service, I have swung around to the view that indeed bias existed in the Service, but it was a bias based on lack of knowledge and understanding of the subject. Success in persuading the Service to undertake a maritime project lay in making a solid, rational case for the project. Over the years the Service has become more used to, and therefore more receptive to, maritime preservation. Just recently, for example, the Director of the Park Service made a major commitment to maritime heritage preservation for the reason that it was to the best interest of the nation's maritime history. The National Park Service today is involved in all phases of maritime preservation. This involvement did not spring full blown on the scene. it came about slowly over a long period of years. These early efforts were diverse and scattered over the country. Specifically there were three areas: â&#x20AC;˘ Cabrillo National Monument in San Diego, California commemorated a Spanish voyage that discovered and explored the west coast of the United States. It also had one of the first lighthouses built on the West Coast. â&#x20AC;˘ Cape Hatteras National Seashore-in its early days designated a Recreation Area-on the Outer Banks of North Carolina, unintentionally at first, depicted man's relationship to the sea 22

There is no question the Service is committed to the preservation and interpretation of this country's maritime heritage. The question is how well will we be permitted to perform this work. and possessed the most important US lighthouse in the nineteenth centuryCape Hatteras. â&#x20AC;˘ Salem Maritime National Historic Site in Massachusetts told the story of an important phase of New England shipping history. From this base Service involvement in maritime preservation grew. The growth, however, was for many years land based . Nevertheless, interest within the organization grew, and managers and planners began to look for sea-related subjects to interpret to visitors . The interpretive theme at Cape Hatteras became man-and-thesea, with park rangers telling the visitors about lighthouses, the importance of the offshore Gulf Stream to shipping, the story of the Life Saving Service, and shipwrecks along that most dangerous coast. Cabrillo National Monument began telling the visitors about shore whaling. Commercial fishing, its techniques, successes, and frustrations, became a theme at Cape Cod National Seashore. The history of shipping on the Great Lakes is covered in the interpretive story at Isle Royale National Park in Lake Superior. Man's relationship with the water, both for pleasure and commercial reasons, is a principal theme at the rugged and beautiful Acadia National Park in Maine. And Cristianstead NHS in the Virgin Islands includes the historic Danish customs house around which shipping history is interpreted. In more recent years Congress has authorized a number of seashore and lakeshore parks, and maritime sites, particularly lighthouses and lifesaving stations, are usually found on the land included in each park. Cape Lookout National Seashore, with a lighthouse, lifesaving stations, and the village of Portsmouth; Apostle Island National Lakeshore, with lighthouses and lifesaving stations; and Gateway National Recreation Area with the most historic lighthouse and Life Saving Station site in the country, are examples of such new areas. Naval history has been one of the most neglected themes that the National Park

System commemorates. It is easy to memorialize a battle where the army fought or preserve a fort that was the base of operations against the Indians since a piece of real estate, with attendant structures, can be marked off. But is it impossible to commemorate a naval battle with a piece of the ocean. Moreover, the ships in naval battles do not survive well . The naval warfare that is interpreted is done from a land base. Oliver Perry's victory over the British on Lake Erie in the War of 1812 is represented by a large column on the shores of Put-in-Bay, Ohio. What is said about naval action during the Civil War is told as they relate to forts-e.g., Ft. Donelson and Ft. Sumter-and battlefields-e.g., Vicksburg and Shiloh. In the 1970s the National Park Service began getting sites and ships associated directly with the nation's maritime heritage. As is to be expected, the acquisition coincided with a rising general public awareness and an interest in the nation's sea history. A project that had been long simmering -the preservation and display of the USS Cairo-came to a head in the 1970s, and the National Park Service made the commitment to preserve and display this salvaged Civil War gunboat in a museum setting in Vicksburg, Mississippi. In 1971 the National Park Service acquired its first vessel-the Lightship Chesapeake. Surplus to the needs of the Coast Guard because a tower had replaced it, the lightship-still in operating condition-came to the Service primarily to be part of its environmental education program. Since then the nearly 50-year old vessel has become principally a historic structure, giving the visitor some notion of the history, use, operation, and life aboard this type of aid to navigation. The next event occurred in 1974 when Congress authorized the establishment of the Charlestown Navy Yard as part of Boston National Historical Park. This park was a "Watergate baby" since the bill authorizing it came close to being vetoed. President Nixon's administration opposed the proposal, but the bill reached the White House after he resigned, and, according to rumor at the time, Speaker of the House Thomas O'Neil prevailed upon his old friend President Ford to sign the act. As originally envisioned the Navy Yard was to be a setting for the USS Constitution which the Navy would leave at the yard permanently on display. It didn't take a great deal of astuteness to realize that the story of this Navy Yard was far broader and more important than just one vessel. SEA HISTORY, WINTER 1980-81