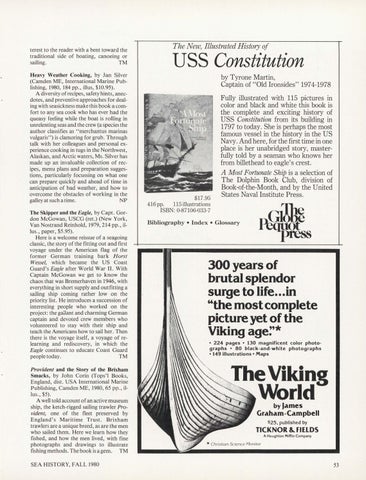 terest to the reader with a bent toward the traditional side of boating, canoeing or sailing. TM Heavy Weather Cooking, by Jan Silver (Camden ME, International Marine Publishing, 1980, 184 pp., illus, $10.95). A diversity of recipes, safety hints, anecdotes, and preventive approaches for dealing with seasickness make this book a comfort to any sea cook who has ever had the queasy feeling while the boat is rolling in unrelenting seas and the crew (a species the author classifies as &quot;merchantus marinas vulgaris&quot;) is clamoring for grub. Through talk with her colleagues and personal experience cooking in tugs in the Northwest, Alaskan, and Arctic waters, Ms. Silver has made up an invaluable collection of recipes, menu plans and preparation suggestions, particularly focussing on what one can prepare quickly and ahead of time in anticipation of bad weather, and how to overcome the obstacles of working in the galley at such a time. NP The Skipper and the Eagle, by Capt. Gordon McGowan, USCG (ret.) (New York, Van Nostrand Reinhold, 1979, 214 pp ., illus., paper, $5.95). Here is a welcome reissue of a seagoing classic, the story of the fitting out and first voyage under the American flag of the former German training bark Horst Wessel, which became the US Coast Guard&#39;s Eagle after World War II. With Captain McGowan we get to know the chaos that was Bremerhaven in 1946, with everything in short supply and outfitting a sailing ship coming rather low on the priority list. He introduces a succession of interesting people who worked on the project: the gallant and charming German captain and devoted crew members who volunteered to stay with their ship and teach the Americans how to sail her. Then there is the voyage itself, a voyage of relearning and rediscovery, in which the Eagle continues to educate Coast Guard people today. TM

Provident and the Story of the Brix.ham Smacks, by John Corin (Tops&#39;! Books, England, dist. USA International Marine Publishing, Camden ME, 1980, 65 pp., illus., $5). A well told account of an active museum ship, the ketch-rigged sailing trawler Provident, one of the fleet preserved by England&#39;s Maritime Trust. Brixham trawlers are a unique breed, as are the men who sailed them. Here we learn how they fished, and how the men lived, with fine photographs and drawings to illustrate fishing methods. The book is a gem. TM SEA HISTORY, FALL 1980

The New, Illustrated History of

Fully illustrated with 115 pictures in color and black and white this book is the complete and exciting history of USS Constitution from its building in 1797 to today. She is perhaps the most famous vessel in the history in the US Navy. And here, for the first time in one place is her unabridged story, masterfully told by a seaman who knows her from billethead to eagle&#39;s crest. A Most Fortunate Ship is a selection of The Dolphin Book Club, division of Book-of-the-Month, and by the United States Naval Institute Press.