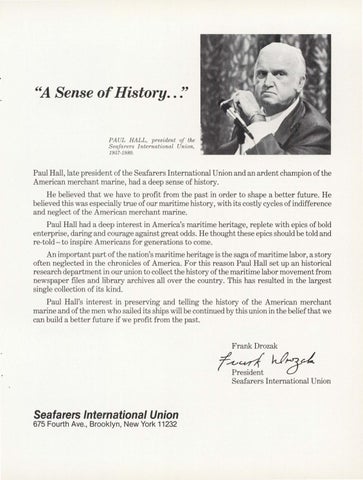 Paul Hall, late president of the Seafarers International Union and an ardent champion of the American merchant marine, had a deep sense of history. He believed that we have to profit from the past in order to shape a better future. He believed this was especially true of our maritime history, with its costly cycles of indifference and neglect of the American merchant marine. Paul Hall had a deep interest in America&#39;s maritime heritage, replete with epics of bold enterprise, daring and courage against great odds. He thought these epics should be told and re-told-to inspire Americans for generations to come. An important part of the nation&#39;s maritime heritage is the saga of maritime labor, a story often neglected in the chronicles of America. For this reason Paul Hall set up an historical research department in our union to collect the history of the maritime labor movement from newspaper files and library archives all over the country. This has resulted in the largest single collection of its kind. Paul Hall&#39;s interest in preserving and telling the history of the American merchant marine and of the men who sailed its ships will be continued by this union in the belief that we can build a better future if we profit from the past. Frank Drozak