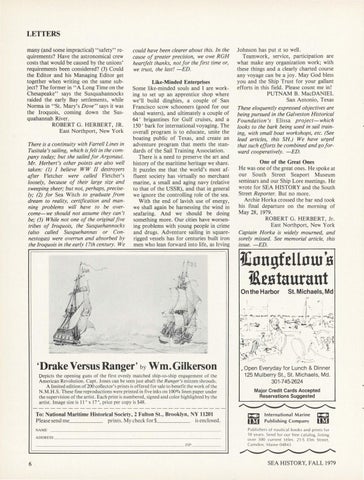 LETTERS many (and some impractical) &quot;safety&quot; requirements? Have the astronomical crew costs that would be caused by the unions&#39; requirements been considered? (3) Could the Editor and his Managing Editor get together when writing on the same subject? The former in &quot;A Long Time on the Chesapeake&quot; says the Susquahannocks raided the early Bay settlements, while Norma in &quot;St. Mary&#39;s Dove&quot; says it was the Iroquois, coming down the Susquahannah River. ROBERT G. HERBERT, JR. East Northport, New York

There is a continuity with Farrell Lines in Tusitala &#39;s sailing, which is felt in the company today; but she sailed for Argonaut. Mr. Herbert&#39;s other points are also well taken: (1) I believe WW II destroyers after Fletcher were called Fletcher&#39;s loosely, because of their large size and sweeping sheer; but not, perhaps, precisely; (2) for Sea Witch to graduate from dream to reality, certification and manning problems will have to be overcome-we should not assume they can&#39;t be; (3) While not one of the original five tribes of Iroquois, the Susquehannocks (also called Susquehannas or Connestogas) were overrun and absorbed by the Iroquois in the early 17th century. We

could have been clearer about this. In the cause of greater precision, we owe ROH heartfelt thanks, not for the first time or, we trust, the last! -ED. Like-Minded Enterprises Some like-minded souls and I are working to set up an apprentice shop where we&#39;ll build dinghies, a couple of San Francisco scow schooners (good for our shoal waters), and ultimately a couple of 64&#39; brigantines for Gulf cruises, and a 150 &#39; bark for international voyaging. The overall program is to educate, unite the boating public of Texas, and create an adventure program that meets the standards of the Sail Training Association. There is a need to preserve the art and history of the maritime heritage we share. It puzzles me that the world&#39;s most affluent society has virtually no merchant marine, a small and aging navy (relative to that of the USSR), and that in general we ignore the controlling role of the sea. With the end of lavish use of energy, we shall again be harnessing the wind in seafaring. And we should be doing something more. Our cities have worsening problems with young people in crime and drugs. Adventure sailing in squarerigged vessels has for centuries built iron men who lean forward into life, as Irving I

Johnson has put 1t so well. Teamwork, service, participation are what make any organization work; with these things and a clearly charted course any voyage can be a joy. May God bless you and the Ship Trust for your gallant efforts in this field . Please count me in! PUTNAM B. MacDANIEL San Antonio, Texas These eloquently expressed objectives are being pursued in the Galveston Historical Foundation &#39;s Elissa project-which looks to the bark being used in sail training, with small boat workshops, etc. (See lead articles, this SH.) We have urged that such efforts be combined and go forward cooperatively. -ED. One of the Great Ones He was one of the great ones. He spoke at our South Street Seaport Museum seminars and our Ship Lore meetings. He wrote for SEA HISTORY and the South Street Reporter. But no more. Archie Horka crossed the bar :ind took his final departure on the morning of May 28, 1979. ROBERT G . HERBERT, Jr. East Northport, New York Captain Horka is widely mourned, and sorely missed. See memorial article, this issue. -ED.

&#39;Drake Versus Ranger&#39; by Wm.Gilkerson Oepicts the opening guns of the fir st evenly matched ship-to-ship engagement of the American Revolution . Capt. Jones can be seen just abaft the Ranger&#39;s mi zzen shrouds. A limited ed iti on of 200 collector&#39;s prints is offered for sale to benefit the work of the N.M .H.S. These fine reproductions were printed in five ink s on 100% lin en paper under the supervision of the artist. Each print is numbered, signed a nd color highlighted by the artist. Image size is I I &quot;x I 7 &quot;, price per copy is $48.