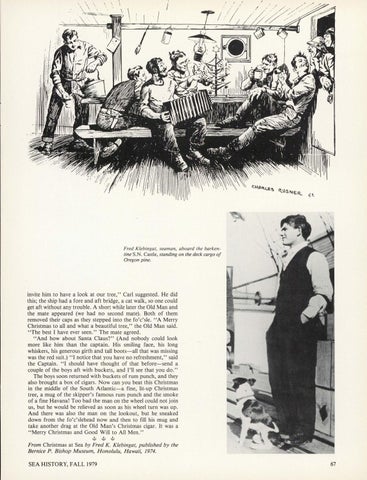 Fred Klebingat, seaman, aboard the barkentine S.N. Castle, standing on the deck cargo of Oregon pine.

invite him to have a look at our tree,&quot; Carl suggested. He did this; the ship had a fore and aft bridge, a cat walk, so one could get aft without any trouble. A short while later the Old Man and the mate appeared (we had no second mate). Both of them removed their caps as they stepped into the fo&#39;c&#39;sle . &quot;A Merry Christmas to all and what a beautiful tree,&quot; the Old Man said. &quot;The best I have ever seen.&quot; The mate agreed. &quot;And how about Santa Claus?&quot; (And nobody could look more like him than the captain. His smiling face, his long whiskers, his generous girth and tall boots-all that was missing was the red suit.) &quot;I notice that you have no refreshment,&quot; said the Captain. &quot;I should have thought of that before-send a couple of the boys aft with buckets, and I&#39;ll see that you do.&quot; The boys soon returned with buckets of rum punch, and they also brought a box of cigars. Now can you beat this Christmas in the middle of the South Atlantic-a fine, lit-up Christmas tree, a mug of the skipper&#39;s famous rum punch and the smoke of a fine Havana! Too bad the man on the wheel could not join us, but he would be relieved as soon as his wheel turn was up. And there was also the man on the lookout, but he sneaked down from the fo&#39;c&#39;slehead now and then to fill his mug and take another drag at the Old Man&#39;s Christmas cigar. It was a &quot;Merry Christmas and Good Will to All Men.&quot;