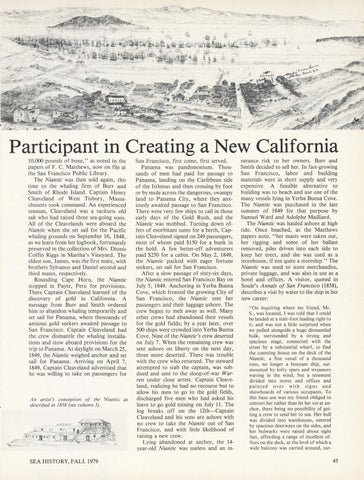 Participant in Creating a New California 10,000 pounds of bone,&quot; as noted in the papers of F. C. Matthews, now on file at the San Francisco Public Library. The Niantic was then sold again, this time to the whaling firm of Burr and Smith of Rhode Island . Captain Henry Cleaveland of West Tisbury, Massachusetts took command. An experienced seaman, Cleaveland was a taciturn old salt who had raised three sea-going sons. All of the Cleavelands were aboard the Niantic when she set sail for the Pacific whaling grounds on September 16, 1848, as we learn from her logbook, fortunately preserved in the collection of Mrs. Dionis Coffin Riggs in Martha&#39;s Vineyard. The eldest son, James, was the first mate, with brothers Sylvanus and Daniel second and third mates, respectively . Rounding Cape Horn, the Niantic stopped in Payte, Peru for provisions. There Captain Cleaveland learned of the discovery of gold in California. A message from Burr and Smith ordered him to abandon whaling temporarily and set sail for Panama, where thousands of anxious gold seekers awaited passage to San Francisco. Captain Cleaveland had the crew dismantle the whaling installations and stow aboard provisions for the trip to Panama. At daylight on March 25, 1849, the Niantic weighed anchor and set sail for Panama. Arriving on April 7, 1849, Captain Cleaveland advertised that he was willing to take on passengers for

San Francisco, first come, first served. Panama was pandemonium. Thousands of men had paid for passage to Panama, landing on the Caribbean side of the Isthmus and then crossing by foot or by mule across the dangerous, swampy land to Panama City, where they anxiously awaited passage to San Francisco. There were very few ships to call in those early days of the Gold Rush, and the Niantic was mobbed. Turning down offers of exorbitant sums for a berth, Captain Cleaveland signed on 249 passengers, most of whom paid $150 for a bunk in the hold. A few better-off adventurers paid $250 for a cabin. On May 2, 1849, the Niantic packed with eager fortune seekers, set sail for San Francisco. After a slow passage of sixty-six days, the Niantic entered San Francisco Bay on July 5, 1849. Anchoring in Yerba Buena Cove, which fronted the growing City of San Francisco, the Niantic sent her passengers and their luggage ashore. The crew began to melt away as well. Many other crews had abandoned their vessels for the gold fields; by a year later, over 500 ships were crowded into Yerba Buena Cove. Nine of the Niantic&#39;s crew deserted on July 7. When the remaining crew was sent ashore on liberty on the next day, three more deserted. There was trouble with the crew who returned. The steward attempted to stab the captain, was subdued and sent to the sloop-of-war Warren under close arrest. Captain Cleaveland, realizing he had no recourse but to allow his men to go to the gold fields, discharged five men who had asked his leave to go gold mining on July 11. The log breaks off on the 12th-Captain Cleaveland and his sons are ashore with no crew to take the Niantic out of San Francisco, and with little likelihood of raising a new crew. Lying abandoned at anchor, the 14year-old Niantic was useless and an in-

surance risk to her owners. Burr and Smith decided to sell her. In fast-growing San Francisco, labor and building materials were in short supply and very expensive. A feasible alternative to building was to beach and use one of the many vessels lying in Yerba Buena Cove. The Niantic was purchased in the late summer of 1849 for that purpose by Samuel Ward and Adolphe Mailliard. The Niantic was hauled ashore at high tide. Once beached, as the Matthews papers note, &quot;her masts were taken out, her rigging and some of her ballast removed, piles driven into each side to keep her erect, and she was used as a storehouse, if not quite a storeship.&quot; The Niantic was used to store merchandise, private luggage, and was also in use as a hotel and offices. A visitor, quoted in Soule&#39;s Annals of San Francisco (1858), describes a visit by water to the ship in her new career: &quot;On inquiring where my friend , Mr. S., was located, I was told that I could be landed at a stair-foot leading right to it; and was not a little surprised when we pulled alongside a huge dismantled hulk, surrounded by a strong and spacious stage, connected with the street by a substantial wharf, to find the counting house on the deck of the Niantic, a fine vessel of a thousand tons, no longer a bouyant ship, surmounted by lofty spars and streamers waving in the wind, but a tenement divided into stores and offices and painted over with signs and showboards of various occupants. To this base use was my friend obliged to convert her rather than let her rot at anchor, there being no possibility of getting a crew to send her to sea. Her hull was divided into warehouses, entered by spacious doorways on the sides, and her bulwarks were raised about eight feet , affording a range of excellent offices on the deck , at the level of which a wide balcony was carried around, sur-