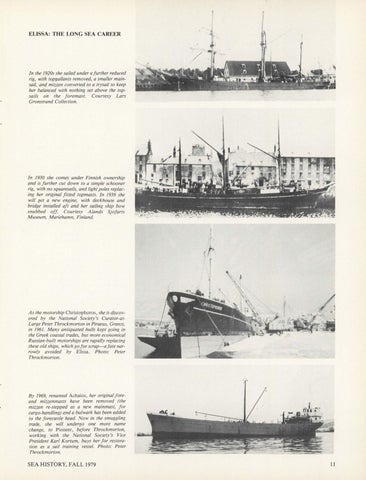 In the 1920s she sailed under a further reduced rig, with topgallants removed, a smaller mainsail, and mizzen converted to a trysail to keep her balanced with nothing set above the topsails on the foremast. Courtesy Lars Gronstrand Collection.

Jn 1930 she comes under Finnish ownership and is further cut down to a simple schooner rig, with no squaresails, and light poles replacing her original fitted topmasts. In 1936 she will get a new engine, with deckhouse and bridge installed aft and her sailing ship bow snubbed off Courtesy A/ands Sjofarts Museum, Mariehamn, Finland.

&#39;&#39; As the motorship Christophoros, she is discovered by the National Society&#39;s Curator-atLarge Peter Throckmorton in Piraeus, Greece, in 1961. Many antiquated hulls kept going in the Greek coastal trades, but more economical Russian-built motorships are rapidly replacing these old ships, which go for scrap-a fate narrowly avoided by Elissa. Photo: Peter Throckmorton.

By 1969, renamed Achaios, her original foreand mizzenmasts have been removed (the mizzen re-stepped as a new mainmast, for cargo-handling) and a bulwark has been added to the forecastle head. Now in the smuggling trade, she will undergo one more name change, to Pioneer, before Throckmorton, working with the National Society&#39;s Vice President Karl Kortum, buys her for restoration as a sail training vessel. Photo: Peter Throckmorton.