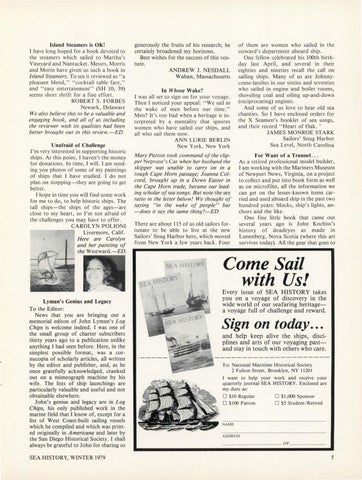 Island Steamers is OK! I have long hoped for a book devoted to the steamers which sailed to Martha's Vineyard and Nantucket. Messrs. Morris and Morin have given us such a book in Island Steamers. To see it reviewed as "a pleasant blend," "cocktail table fare," and "easy entertainment" (SH IO, 39) seems short shrift for a fine effort. ROBERT S. FORBES Newark, Delaware

We also believe this to be a valuable and engaging book, and all of us including the reviewer wish its qualities had been better brought out in this review.-ED Unafraid of Challenge I'm very interested in supporting historic ships. At this point, I haven't the money for donations. In time, I will. I am sending yo u photos of some of my paintings of ships that I have studied . I do not plan on stopping-they are goi ng to get better. I hope in time you will find some work for me to do, to help historic ships. The tall ships-the ships of the ages-are close to my heart, so I'm not afraid of the challenges you may have to offer. CAROLYN POLIONI Livermore, Calif.

Here are Carolyn and her painting of the Westward.-ED.

generously the fruits of his research; he certainly broadened my horizons. Best wishes for the success of this venture. ANDREW J. NESDALL Waban, Massachusetts In Whose Wake? I was all set to sign on for your voyage. Then I noticed your appeal: "We sail in the wake of men before our time." Men? It's too bad when a heritage is interpreted by a mentality that ignores women who have sai led our ships, and all who sail them now. ANN LURIE BERLIN New York, New York

Mary Patton took command of the clipper Neptune's Car when her husband the skipper was unable to carry on in a tough Cape Horn passage; Joanna Colcord, brought up in a Down Easter in the Cape Horn trade, became our leading scholar of sea songs. But note the sex ratio in the letter below! We thought of saying "in the wake of people" but -does it say the same thing?-ED There are about 115 of us old sailors fortunate to be able to live at the new Sailors' Snug Harbor here, which moved from New York a few years back. Four

Lyman's Genius a nd Legacy To the Editor: News that you are bringing out a memorial editon of John Lyman's Log Chips is welcome indeed. I was one of the small group of charter subscribers thirty years ago to a publication unlike anything I had seen before. Here, in the simplest possible formal, was a cornucopia of scholarly articles, all written by the editor and publisher, and, as he once gratefully acknowledged, cranked out on a mimeograph machine by his wife. The lists of ship launchings are particularly valuable and useful and not obtainable elsewhere. John's geniut> and legacy are in Log Chips, his only published work in the marine field that I know of, except for a list of West Coast-built sailing vessels which he compiled and which was printed originally in Americana and later by the San Diego Historical Society. I shall always be grateful to John for sharing so SEA HISTORY, WINTER 1979

of them are women who sailed in the steward's department aboard ship. One fellow celebrated his IOOth birthday last April, and several in their eighties and nineties recall the call on sailing ships. Many of us are Johnnycome-latelies in our sixties and seven ties who sai led in engine and boiler rooms, shoveling coal and oiling up-and-down (reciprocating) engines. And some of us love to hear old sea chanties. So I have enclosed orders for the X Seamen's booklet of sea songs, and their record "Heart of Oak . ' JAMES MONROE STARK Sailors' Snug Harbor Sea Level, North ÂˇCarolina For Want of a TrunneI ... As a retired professional model builder, I am working with the Mariners Museum of Newport News, Virginia, on a project to collect and put into book form as well as on microfilm, all the information we can get on the lesser-known items carried and used aboard ship in the past two hundred years: blocks, ship's lights, anchors and the like . One fine little book that came out several years ago is John Kochiss's histo ry of deadeyes as made in Lunenberg, Nova Scotia (where this art survives today). All the gear that goes to

Come Sail with Us!

Every issue of SEA HISTORY takes you on a voyage of discovery in the wide world of our seafaring heritagea voyage full of challenge and reward.

Sign on today ... and help keep alive the ships, disciplines and arts of our voyaging pastand stay in touch with others who care. To: National Maritime Histo rical Society 2 Fulton Street, Brooklyn, NY 11201 I want to help your work and receive your quarterly journal SEA HISTORY . Enclosed are my dues as: D $10 Regular D $1,000 Sponsor D $100 Patron D $5 Student/ Retired