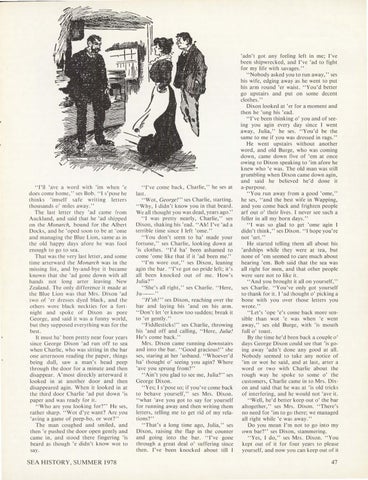 "1 'll 'ave a word with ' im when 'e does come home," ses Bob. "I s'pose he think s 'imself sa fe writing letters thou sands o' miles away." The last letter they 'ad came from Auckland, and said that he 'ad sh ipped on the Monarch, bound for the Albert Dock s, and he 'oped soon to be at 'ome and managing th e Blue Lion, same as in the old happ y days afore he was fool enough to go to sea . That was the very last letter, and some time arterward the Monarch was in the missing list, and by-and-bye it became known that she 'ad gone down with all hands not long arter leaving New Zealand. The only difference it made at the Blue Lion was that Mrs. Di xo n 'ad two of 'er dresses dyed black, and the others wore black neckties for a fort night and spoke of Dixon as pore George, and said it was a funny world, but they supposed everything was for the best. It must ha' been pretty near four years since George Dixon 'ad run off to sea when Charlie, who was sitting in the bar one arternoon reading the paper, things being dull, saw a man 's head peep through the door for a minute and then disa ppear. A 'most direckly arterward it looked in at another door and then disappeared agin. When it looked in at the third door Charlie 'ad put down 'is paper and was ready for it. "Who are you looking for?" He ses, rather sharp. "Wot d'ye want? Are yo u 'aving a game of peep-bo, or wot?" The man coughed and smiled , and then 'e pushed the door open gently and came in, and stood there fingering 'is beard as though 'e didn't know wot to say.

"I've come back, Charlie," he ses al last. "Wot, George!" ses Charlie, starting . "Why, I didn ' t know you in that beard. We all thou ght you was dead , years ago ." "I was pretty nearly , Charlie," ses Dixon, shaking hi s 'ead. "A h! I've 'ad a terrible time since I left 'ome." " You don't seem to ha ' made your fortune," ses Charlie, looking down at 'is clothes. "I'd ha' been ashamed to come 'ome like that if it 'ad been me." " I'm wore out," ses Dixon, leaning agin the bar. " I've got no pride left; it' s all been knocked out of me. How' s Julia?" "She's all right," ses C harlie . "Here, Ju--" " H'sh!" ses Dixon , reaching over the bar and lay ing his 'and on his arm. "Don't let 'er know too sudden; break it to 'er gently." "Fiddlesticks!" ses Charlie, throwing his 'and off and calling, " Here, Julia! He' s come back ." Mrs. Dixon came running downstairs and into the bar. "Good gracious!" she ses, staring at her 'usband. "Whoever'd ha ' thought o ' seeing you agin? Where 'ave you sprung from?" "Ain't you glad to see me, Julia?" ses George Dixon . "Yes; I s' pose so; if you've come back to behave yourself," ses Mrs. Dixon. "what 'ave you got to say for yourself for running away and then writing them letters, telling me lo get rid of my relations?" "That's a long time ago, Julia," ses Dixon, raising the flap in the counter and going into the bar. "I've gone through a great deal o' suffering since then. I've been knocked about till I

'adn't got any feeling left in me; I've been shipwrecked, and I've 'ad to fight for my ti fe with savages." "Nobody asked you to run away," ses his wife, edging away as he went to put his arm round 'er waist. "You'd better go upstairs and put on some decent clothes.'' Dixon looked at 'er for a moment and then he 'ung his 'ead. "I've been thinking o' you and of seeing you agin every day since I went away, Julia," he ses. "You'd be the same to me if yo u was dressed in rags." He went upstairs without another word, and old Burge, who was coming down, came down five of 'em at once owing to Dixon speaking to ' im afore he knew who 'e was. The old man was still grumbling when Dixon came down agin, and said he believed he'd done it a-purpose. "You run away from a good 'ome," he ses, "and the best wife in Wapping, and you come back and frighten people arf out o' their lives . I never see such a feller in all my born days ." "I was so glad to get 'ome agin I didn ' t think," ses Dixon . "I hope you're not 'urt." He started telling them all about his 'ardships while they were at tea, but none of 'em seemed to care much about hearing 'em. Bob said that the sea was all right for men, and that other people were sure not to like it. "And you brought it all on yourself," ses Charlie. " You've only got yourself to thank for it. I 'ad thought o' picking a bone with you over those letters you wrote .'' "Let's 'ope 'e's come back more sensible than wot 'e was when 'e went away," ses old Burge, with 'is mouth full o' toast. By the time he'd been back a couple o' days George Dixon could see that ' is going away 'adn't done any good at all. Nobody seemed to take any notice of 'im or wot he said, and at last, arter a word or two with Charlie about th e rough way he spoke to some o' the customers, Charlie came in to Mrs . Dixon and said th at he was at 'is old tricks of interfering, and he would not 'ave it. "Well, he'd better keep out o' the bar altogether," ses Mrs. Dixon. "There' s no need for 'im to go there; we managed all ri ght while 'e was away." Do you mean I'm not to go into my own bar?" ses Dixon, stammering. "Yes, I do," ses Mrs. Dixon. "You kept out of it for four years to please yourself, and now you can keep out of it 47