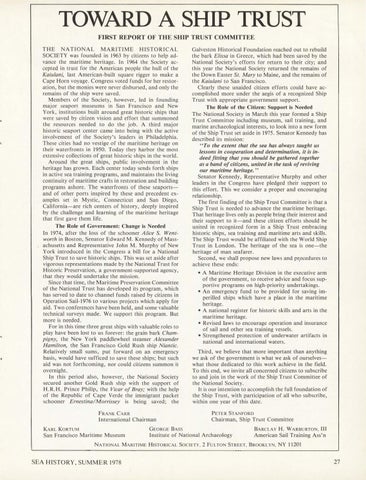 TOWARD A SHIP TRUST FIRST REPORT OF THE SHIP TRUST COMMITTEE THE NATIONAL MARITIME HISTORICAL SOCIETY was founded in 1963 by citizens to help advance the maritime heritage. In 1964 the Society accepted in trust for the American pe9ple the hull of the Kaiulani, last American-built square rigger to make a Cape Horn voyage. Congress voted funds for her restoration, but the monies were never disbursed, and only th e remains of the ship were saved . Members of the Society, however, led in founding major seaport museums in San Francisco and New York, institutions built around great historic ships that were saved by citizen vision and effort that sum moned the resources needed to do the job. A third major historic seaport center came into being with the active involvement of th e Society's leaders in Philadelphia. These cities had no vestige of the maritime heritage on their waterfronts in 1950. Today they harbor the most extensive collections of great historic ships in the world. Around the great ships, public involvement in the heritage has grown. Each center today sends forth ships in active sea training programs, and maintains the living continuity of maritime crafts in restorat ion and building programs ashore. The waterfronts of these seaportsand of other ports inspired by these and precedent examp les set in Mystic, Connecticut and San Diego, California-are rich centers of history, deeply inspired by the challenge and learning of the maritime heritage that first gave them life . The Role of Government: Change is Needed In 1974, after the loss of the schooner Alice S. Wentworth in Boston, Senator Edward M. Kennedy of Massac husetts and Representative John M. Murphy of New York introduced in the Congress a bill for a National Ship Trust to save historic ships. This was set aside after vigorous representations made by the National Trust for Historic Preservation, a government-supported agency, that they would underta ke the mission. Since that time, the Maritime Preservation Committee of the National Trust has developed its program, which has served to date to channel funds raised by citizens in Operation Sail-1976 to various projects which apply for aid. Two conferences have been held, and some valuable technical surveys made. We support this program . But more is needed. For in this time three great ships with valuable roles to play have been lost to us forever: the grain bark Champigny, the New York paddlewheel steamer Alexander Hamilton, the San Francisco Gold Rush ship Niantic. Relatively small sums, put forward on an emergency basis, would have sufficed to save these ships; but such aid was not forthcoming , nor could citizens summon it overnight. In this period also, however, the National Society secured another Gold Rush ship with the support of H . R.H. Prince Philip, the Vicar of Bray; with the help of the Republic of Cape Verde the immigrant packet schooner Ernestina/Morrissey is being saved; the FRANK CARR International Chairman KARL KORTUM San Francisco Maritime Museum

Galveston Historical Foundation reached out to rebuild the bark Elissa in Greece, which had been saved by the National Society's efforts for return to their city; and this year the National Society returned the remains of the Down Easter St. Mary to Maine, and the remains of the Kaiulani to San Francisco. Clearly these unaided citizen efforts could have accomplished more under the aegis of a recognized Ship Trust with appropriate government support. The Role of the Citizen: Support is Needed The National Society in March this year formed a Ship Trust Committee including museum, sail training, and mar ine archaeological interests, to look into a new form of the Ship Trust set aside in 1975 . Senator Kenned y has described its mission:

"To the extent that the sea has always taught us lessons in cooperation and determination, it is indeed fitting that you should be gathered together as a band of citizens, united in the task of reviving our maritime heritage. " Senator Kennedy, Representative Murphy and other leaders in the Congress have pledged their support to this effort. This we consider a proper and encouraging relationship. The first finding of the Ship Trust Committee is that a Ship Trust is needed to advance the maritime heritage. That heritage lives only as people bring their interest and their support to it-and these citizen efforts should be united in recognized form in a Ship Trust embracing historic ships, sea training and maritime arts and skills. The Ship Trust would be affiliated with the World Ship Trust in London. The heritage of the sea is one-the heritage of man seafarer. Second, we shall propose new laws and pr.ocedures to achieve these ends: • A Maritime Heritage Division in the executive arm of the government, to receive advice and focus supportive programs on high-priority undertakings . • An emergency fund to be provided for saving imperilled ships which have a place in the maritime heritage. • A national register for historic skills and arts in the maritime heritage. • Revised laws to encourage operation and insurance of sail and other sea training vessels. • Strengthened protection of und erwater artifacts in national and international waters. Third, we believe that more important than anything we ask of the government is what we ask of ourselveswhat those dedicated to this work achieve in the field. To this end, we invite all concerned citizens to subscribe to and join in the work of the Ship Trust Committee of the National Society. It is our intention to accomplish the full foundation of the Ship Trust, with participation of all who subscribe, within one year of this date. PETER STANFORD Chairman, Ship Trust Committee