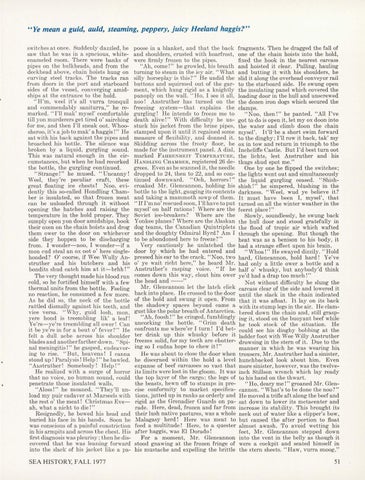 &quot;Ye mean a guid, auld, steaming, peppery, juicy Heeland haggis?&quot; switches at once. Suddenly dazzled, he saw that he was ih a spacious, whiteenameled room. There were banks of pipes on the bulkheads, and from the deckhead above, chain hoists hung on curving steel tracks. The tracks ran from doors in the port and starboard sides of the vessel, converging amidships at the entrance to the hold. &quot;H&#39;m, wee! it&#39;s all vurra tranquil and commendably saniturra,&quot; he remarked. &quot;I&#39;ll mak&#39; mysel&#39; comfortable till yon murderers get tired o&#39; sairching for me, and then I&#39;ll sneak oot. Whoosheroo, it&#39;s a job to mak&#39; a haggis!&quot; He sat with his back against the pipes and broached his bottle. The silence was broken by a liquid, gurgling sound. This was natural enough in the circumstances, but when he had recorked the bottle, the gurgling continued. &quot;Strange!&quot; he mused. &quot;Uncanny! Wee!, they&#39;re peculiar craft, these great floating ice chests! Noo, evidently this so-called Handling Chamber is insulated, so that frozen meat can be unloaded through it withoot opening the hatches and raising the temperature in the hold proper. They sum ply open yon door amidships, hook their oxen on the chain hoists and drog them ower to the door on whichever side they hoppen to be discharging from. I wonder- noo, I wonder-if a mon cud steal an ox oot o&#39; here singlehanded? O&#39; coorse, if Wee Wully Anstruther and his butchers and his bondits shud catch him at it-brhh!&quot; The very thought made his blood run cold, so he fortified himself with a few thermal units from the bottle. Feeling no reaction, he consumed a few more. As he did so, the neck of the bottle rattled dismally against his teeth, and vice versa. &quot;Why, guid losh, mon , yere hond is treembling lik&#39; a leaf! Ye&#39;re- ye&#39;re treembling all ower ! Can it be ye&#39;re in for a bout o&#39; fever?&quot; He felt a dull ache across his shoulder blades and another farther down. &quot;Spinal meningitis!&quot; he gasped, endeavoring to rise. &quot;But, heavens! I canna stond up! Paralysis! Help!&quot; he bawled. &quot;Austruther ! Somebody! Help!&quot; He realized with a surge of horror that no voice, no human sound, could penetrate those insulated walls. &quot;Aloss ! &quot; he moaned. &quot;They&#39;ll unload my puir cadaver at Marseels with the rest o&#39; the meat! Christmas Eveah, what a nicht to die!&quot; Resignedly, he bowed his head and buried his face in his hands. Soon he was conscious of a painful constriction in his armpits and across the chest. His first diagnosis was pleurisy; then he discovered that he was leaning forward into the slack of his jacket like a pa-

poose in a blanket, and that the back and shoulders, crusted with hoarfrost, were firmly frozen to the pipes. &quot;Ah, come!&quot; he growled, his breath turning to steam in the icy air. &quot;What silly horseplay is this?&quot; He undid the buttons and squirmed out of the garment, which hung rigid as a knightly panoply on the wall. &quot;Ho, I see it all, noo ! Anstruther has turned on the freezing system-that explains the gurgling! He intends to freeze me to death alive!&quot; With difficulty he unstuck his jacket from the brine pipes, stamped upon it until it regained some measure of flexibility, and donned it. Skidding across the frosty floor, he made for the instrument panel. A dial, marked FAHRENHEIT TEMPERATURE, HANDLING CHAMBER, registered 26 degrees. Even as he scanned it, the needle dropped to 24, then to 22, and so continued downward. &quot;Och, horrors!&quot; croaked Mr. Glencannon, holding his bottle to the light, gauging its contents and taking a mammoth sowp of them. &quot;If I&#39;m no&#39; rescued soon, I&#39;ll have to put mysel&#39; on half rations! Where are the Soviet ice-breakers? Where are the Y onkee planes? Where are the Alaskan dog teams, the Canadian Quintriplets and the doughty Odmiral Byrd? Am I to be abandoned here to freeze?&quot; Very cautiously he unlatched the door by which he had entered and pressed his ear to the crack. &quot;N oo, two o&#39; ye wait richt here,&quot; he heard Mr. Anstruther&#39;s rasping voice. &quot;If he comes down this way, clout him ower the head and - - &quot; Mr. Glencannon let the latch click back into place. He crossed to the door of the hold and swung it open. From the shadowy spaces beyond came a gust like the polar breath of Antarctica. &quot;Ah, foosh ! &quot;he cringed, fumblingly uncorking the bottle. &quot;Grim death confronts me where&#39; er I turn! I&#39;d better drink up this whusky before it freezes solid, for my teeth are chottering so I cudna hope to chew it!&quot; He was about to close the door when he disce,rned within the hold a level expanse of beef carcasses so vast that its limits were lost in the gloom. It was the top layer of the cargo; the legs of the beasts, hewn off to stumps in precise conformity to market specifications, jutted up in ranks as orderly and rigid as the Grenadier Guards on parade. Here, dead, frozen and far from their lush native pastures, was a whole Malagasy herd! Here was meat to feed a multitude! Here, to a quester ;lfter haggis, was El Dorado! For a moment, Mr. Glencannon stood gnawing at the frozen fringe of his mustache and expelling the brittle

fragments. Then he dragged the fall of one of the chain hoists into the hold, fixed the hook in the nearest carcass and hoisted it clear. Pulling, hauling and butting it with his shoulders, he slid it along the overhead conveyor rail to the starboard side. He swung open the insulating panel which covered the loading door in the hull and unscrewed the dozen iron dogs which secured the clamps. &quot;Nao, then!&quot; he panted. &quot;All I&#39;ve got to do is open it, let my ox &lt;loon into the water and climb &lt;loon the chain mysel&#39;. It&#39;llÂˇ be a short swim forward to the dinghy; I&#39;ll row it back, tak&#39; my ox in tow and return in triumph to the Inchcliffe Castle. But I&#39;d best turn oot the lichts, lest Anstruther and his thugs shud spot me.&quot; One by one he flipped the switches; the lights went out and simultaneously the liquid gurgling ceased. &quot;Shishshish ! &quot; he simpered, blushing in the darkness. &quot;Wee!, wud ye believe it? It must have been I, mysel&#39;, that turned on all the winter weather in the feerst place!&quot; Slowly, soundlessly, he swung back the hull door and stood gratefully in the flood of tropic air which wafted through the opening. But though the heat was as a benison to his body, it had a strange effect upon his brain. &quot;Whoa!&quot; He swayed dizzily. &quot;Hold hard, Glencannon, hold hard! Y e&#39;ve had only a little ower a bottle and a half o&#39; whusky, but anybody&#39;d think ye&#39;d had a drap too much!&quot; Not without difficulty he slung the carcass clear of the side and lowered it until the slack in the chain indicated that it was afloat. It lay on its back with its stump legs in the air. He clambered down the chain and, still grasping it, stood on the buoyant beef while he took stock of the situation. He could see his dinghy bobbing at the ladder foot with Wee Willy Anstruther drowsing in the stern of it. Due to the manner in which he was wearing his trousers, Mr. Anstruther had a sinister, hunchbacked look about him. Even more sinister, however, was the twelveinch Stillson wrench which lay ready to his hand on the thwart. &quot;Ho, deary me!&quot; groaned Mr. Glencannon. &quot;What&#39;s to be done the noo?&quot; He moved a trifle aft along the beef and sat down to lower its metacenter and increase its stability. This brought its neck out of water like a clipper&#39;s bow, but caused the after portion to float almost awash. To avoid wetting his feet, Mr. Glencannon stepped down into the vent in the belly as though it were a cockpit and seated himself in the stern sheets. &quot;Haw, vurra snoog,&quot;