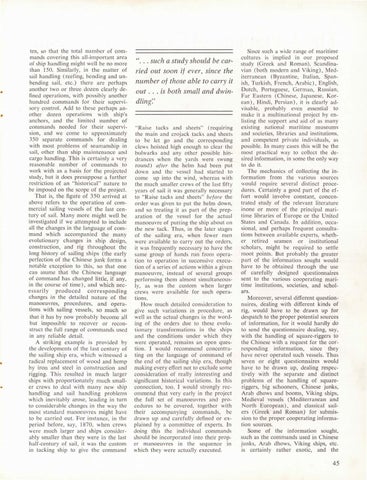 ten, so that the total number of commands covering this all-important area of ship handling might well be no more than 150. Similarly, in the matter of sail handling (reefing, bending and unbending sail, etc.) there are perhaps another two or three dozen clearly defined operations, with possibly another hundred commands for their supervisory control. Add to these perhaps another dozen operations with ship's anchors, and the limited number of commands needed for their supervision, and we come to approximately 350 separate commands for dealing with most problems of seamanship in sail, other than ship maintenance and cargo handling. This is certainly a very reasonable number of commands to work with as a basis for the projected study, but it does presuppose a further restriction of an "historical" nature to be imposed on the scope of the project. That is, the figure of 350 arrived at above refers to the operation of commercial sailing vessels of the last century of sail. Many more might well be investigated if we attempted to include all the changes in the language of command which accompanied the many evolutionary changes in ship design, construction, and rig throughout the long history of sailing ships (the early perfection of the Chinese junk forms a notable exception to this, so that one can asume that the Chinese language of command has changed little, if any, in the course of time), and which necessarily produced corresponding changes in the detailed nature of the manoeuvres, procedures, and operations with sailing vessels, so much so that it has by now probably become all but impossible to recover or reconstruct the full range of commands used in any reliable detail. A striking example is provided by the developments of the last century of the sailing ship era, which witnessed a radical replacement of wood and hemp by iron and steel in construction and rigging. This resulted in much larger ships with proportionately much smaller crews to deal with many new ship handling and sail handling problems which inevitably arose, leading in turn to considerable changes in the way the most standard manoeuvres might have to be carried out. For instance, in the period before, say, 1870, when crews were much larger and ships considerably smaller than they were in the last half-century of sail, it was the custom in tacking ship to give the command

" ... such a study should be carried out soon if ever, since the number of those able to carry it out ... is both small and dwindling'.'

"Raise tacks and sheets" (requiring the main and crojack tacks and sheets to be let go and the corresponding clews hoisted high enough to clear the bulwarks and any other possible hindrances when the yards were swung round) after the helm had been put down and the vessel had started to come up into the wind, whereas with the much smaller crews of the last fift y years of sail it was generally necessary to "Raise tacks and sheets" before the order was given to put the helm down, and so treating it as part of the preparation of the vessel for the actual manoeuvre of putting the ship about on the new tack. Thus, in the later stages of the sailing era, when fewer men were available to carry out the orders, it was frequently necessary to have the same group of hands run from operation to operation in successive execution of a series of actions within a given manoeuvre, instead of several groups performing them almost simultaneously, as was the custom when larger crews were available for such operations. How much detailed consideration to give such variations in procedure, as well as the actual changes in the wording of the orders due to these evolutionary transformations in the ships and the conditions under which they were operated, remains an open question. I would recommend concentrating on the language of command of the end of the sailing ship era, though making every effort not to exclude some consideration of really interesting and significant historical variations. In this connection, too. I would strongly recommend that very early in the project the full set of manoeuvres and procedures to be covered, together with their accompanying commands, be drawn up and carefully defined or explained by a committee of experts. In doing this the individual commands should be incorporated into their proper manoeuvres in the sequence in which they were actually executed.

Since such a wide range of maritime cultures is implied in our proposed study (Greek and Roman), Scandinavian (both modern and Viking), Mediterranean (Byzantine, Italian, Spanish, Turkish, French, Arabic), English, Dutch, Portuguese, German, Russian, Far Eastern (Chinese, Japanese, Korean), Hindi, Persian) , it is clearly advisable, probably even essential to make it a multinational project by enlisting the support and aid of as many existing national maritime museums and societies, libraries and institutions, and competent private individuals, as possible. In many cases this will be the most practical way to collect the desired information, in some the only way to do it. The mechanics of collecting the information from the various sources would require several distinct procedures. Certainly a good part of the effort would involve constant, concentrated study of the relevant literature inone or more of the principal maritime libraries of Europe or the United States and Canada. In addition, occasional, and perhaps frequent consultations between available experts, whether retired seamen or institutional scholars, might be required to settle moot points. But probably the greater part of the information sought would have to be obtained through the use of carefully designed questionnaires sent to the various cooperating maritime institutions, societies, and scholars. Moreover, several different questionnaires, dealing with different kinds of rig, would have to be drawn up for despatch to the proper potential sources of information, for it would hardly do to send the questionnaire dealing, say, with the handling of square-riggers to the Chinese with a request for the corresponding information, since they have never operated such vessels. Thus seven or eight questionnaires would have to be drawn up, dealing respectively with the separate and distinct problems of the handling of squareriggers, big schooners, Chinese junks, Arab dhows and booms, Viking ships, Medieval vessels (Mediterranean and North European), and classical sailers (Greek and Roman) for submission to the proper cooperating information sources. Some of the information sought, such as the commands used in Chinese junks, Arab dhows, Viking ships, etc. is certainly rather exotic, and the