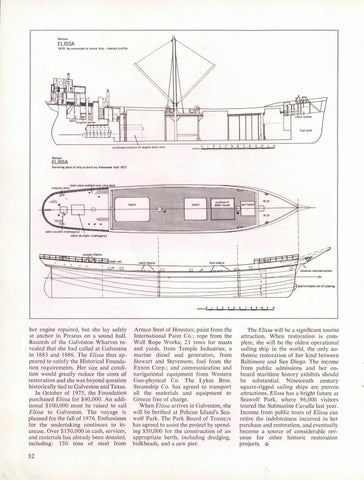 ELISSA 1970 As converted to motor ship

ELISSA Surviving parts of ship as built by Alexander Hall 1877

her engine repaired, but she lay safely at anchor in Piraeus on a sound hull. Records of the Galveston Wharves revealed that she had called at Galveston in 1883 and 1886. The Elissa thus appeared to satisfy the Historical Foundation requirements. Her size and condition would greatly reduce the costs of restoration and she was beyond question historically tied to Galveston and Texas. In October of 1975, the Foundation purchased Elissa for $40,000. An additional $100,000 must be raised to sail Elissa to Galveston. The voyage is planned for the fall of 1976. Enthusiasm for the undertaking continues to increase. Over $150,000 in cash, services, and materials has already been donated, including: 150 tons of steel from

Armco Steel of Houston; paint from the International Paint Co.; rope from the Wall Rope Works; 21 trees for masts and yards, from Temple Industries; a marine diesel and generators, from Stewart and Stevenson; fuel from the Exxon Corp. ; and communication and navigational equipment from Western Geo-physical Co. The Lykes Bros. Steamship Co. has agreed to transport all the materials and equipment to Greece free of charge. When Elissa arrives in Galveston, she will be berthed at Pelican Island&#39;s Seawolf Park. The Park Board of Truste:;&gt;s has agreed to assist the project by spending $50,000 for the construction of an appropriate berth, including dredging, bulkheads, and a new pier.

The Elissa will be a significant tourist attraction. When restoration is complete, she will be the oldest operational sailing ship in the world, the only authentic restoration of her kind between Baltimore and San Diego. The income from public admissions and her onboard maritime history exhibits should be substantial. Nineteenth century square-rigged sailing ships are proven attractions. Elissa has a bright future at Seawolf Park, where 96,000 visitors toured the Submarine Cavalla last year. Income from public tours of Elissa can retire the indebtedness incurred in her purchase and restoration, and eventually become a source of considerable revenue for other historic restoration projects. 4