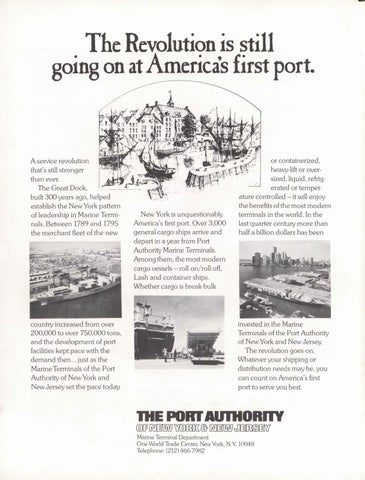 The Revolution is still going on at Americas first port

A service revolution that's still stronger than ever.

the merchant fleet of the new

country increased from over 200,000 to over 750,000 tons, and the development of port facilities kept pace with the demand then ... just as the Marine Terminals of the Port Authority of New York and New Jersey set the pace today.

New York is unquestionably America's first port. Over 3,000 general cargo ships arrive and depart in a year from Port Authority Marine Terminals. Among them, the most modern cargo vessels- roll on/ roll off, Lash and container ships. Whether cargo is break bulk

or containerized, heavy-lift or oversized, liquid, refrigerated or temperature controlled - it will enjoy the benefits of the most modern terminals in the world. In the last quarter century more than half a billion dollars has been

invested in the Marine Terminals of the Port Authority of New York and New Jersey. The revolution goes on. Whatever your shipping or distribution needs may be, you can count on America's first port to serve you best.