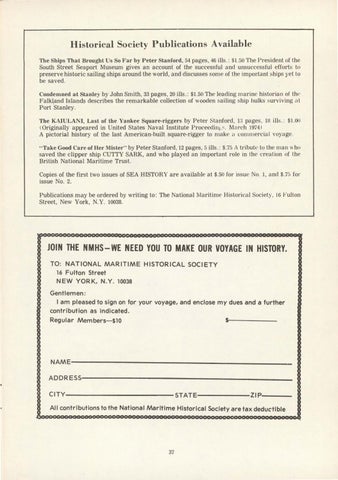 Historical Society Publications A vailahle The Ships That Brought Us So Far by Peter Stanford, 54 pages, 46 ills. : $1.50 The President of the South Street Seaport Museum gives an account of the successful and unsuccessful efforts to preserve historic sailing ships around the world, and discusses some of the important ships yet to be saved. Condemned at Stanley by John Smith, 33 pages, 20 ills.: $1.50 The leading marine historian of thl' Falkland Islands describes the remarkable collection of wooden sailing ship hulks surviving at Port 'stanley. The KAIULANI, Last of the Yankee Square-riggers by Peter Stanford, 1:i pages, 111 ills. : $1.00 <Originally appeared in United States Naval Institute Proceedinp;, March 1974) A pictorial history of the last American-built square-rigger to make a commercial voyage . "Take Good Care of Her Mister" by Peter Stanford, 12 pages, 5 ills.: $.75 A tribute to the man who saved the clipper ship CUTTY SARK, and who played an important role in the creation of the British National Maritime Trust. Copies of the first two issues of SEA HISTORY are available at $.50 for issue No . 1, and $.75 for issue No. 2. Publications may be ordered by writing to : The National Maritime Historical Society, 16 Fulton Street, New York, N.Y. 10038.

JOIN THE NMHS-WE NEED YOU TO MAKE OUR VOYAGE IN HISTORY. TO: NATIONAL MARITIME HISTORICAL SOCIETY 16 Fulton Street NEW YORK, N.Y. 10038 Gentlemen: I am pleased to sign on for your voyage, and enclose my dues and a further contribution as indicated. Regular Members-$10