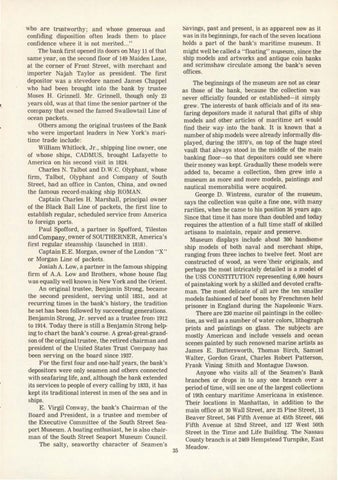 8avings, past and present, is as apparent now as it was in its beginnings, for each of the.seven locations holds a part of the bank's maritime museum . It might well be called a "floating" museum, since the ship models and artworks !ind antique coin banks and scrimshaw circulate among the bank's seven offices.

who are trustworthy; and whose generous and confiding dispositionÂˇ often leads them to place confidence where it is not merited ..." The bank first opened its doors on May 11 of that same year, on the second floor of 149 Maiden Lane, at the corner of Front Street, with merchant and importer Najah Taylor as president. The first depositor was a stevedore named James Chappel who had been brought into the bank by trustee Moses H. Grinnell. Mr. Grinnell, though only 23 years old, was at that time the senior partner of the company that owned the famed Swallowtail Line of ocean packets. Others among the original trustees of the Bank who were important leaders in New York's maritime trade include : William Whitlock, Jr., shipping line owner, one of whose ships, CADMUS, brought Lafayette to America on his second visit in 1824. Charles N. Talbot and D.W.C. Olyphant, whose firm, Talbot, Olyphant and Company of South Street, had an office in Canton, China, and owned the famous record-making ship ROMAN. Captain Charles H. Marshall, principal owner of the Black Ball Line of packets, the first line to establish regular, scheduled service from America to foreign ports. Paul Spofford, a partner in Spofford, Tileston and Company, .owner of SOUTHERNER, America's first regular steamship (launched in 1818). Captain E.E. Morgan, owner of the London "X" or Morgan Line of packets. Josiah A. Low, a partner in the famous shipping firm of A.A. Low and Brothers, whose house flag was equally well known in New York and the Orient. An original trustee, Benjamin Strong, became the second president, serving until 1851, and at recurring times in the bank's history, the tradition he set has been followed by succeeding generations. Benjamin Strong, Jr. served as a trustee from 1912 to 1914. Today there is still a Benjamin Strong helping to chart the bank's course. A great-great-grandson of the original trustee, the retired chairman and president of the United States Trust Company has been serving on the board since 1937. For the first four and one-half years, the bank's depositors were only seamen and others connected with seafaring life, and, although the bank extended its services to pepple of every calling by 1833, it has kept its traditional interest in men of the sea and in ships. E. Virgil Conway, the bank's Chairman of the Board and President, is a trustee and member of the Executive Committee of the South Street Seaport Museum. A boating enthusiast, he is also chairman of the South Street Seaport Museum Council. The salty, seaworthy character of Seamen's 35

The beginnings of the museum are not as clear as those of the bank, because the collection was never officially founded or established-it simply grew. The interests of bank officials and of its seafaring depositors made it natural that gifts of ship models and other articles of maritime art would find their wayÂˇ into the bank. It is known that a number of ship models were already informally displayed, during the 1870's, on top of the huge steel vault that always stood in the middle of the main banking floor-so that depositors could see where their money was kept. Gradually these models were added to, became a collection, then grew into a museum as more and more models, paintings and nautical memorabilia were acquired. George D. Wintress, curator of the museum, says the collection was quite a fine one, with many rarities, when he came to his position 36 years ago. Since that time it has more than doubled and today requires the attention of a full time staff of skilled artisans to maintain, repair and preserve. Museum displays include about 300 handsome ship models of both naval and merchant ships, ranging from three inches to twelve feet. Most are constructed of wood, as were 'their originals, and perhaps the most intricately detailed is a model of the USS CONSTITUTION representing 6,000 hours of painstaking work by a skilled and devoted craftsman. The most delicate of all are the ten smaller models fashioned of beef bones by Frenchmen held prisoner in England during the Napoleonic Wars. There are 230 marine oil paintings in the collection, as well as a number of water colors, lithograph prints and paintings on glass. The subjects are mostly American and include vessels and ocean scenes painted by such renowned marine artists as James E. Buttersworth, Thomas Birch, Samuel Walter, Gordon Grant, Charles Robert Patterson, Frank .Vining Stnith and Montague Dawson. Anyone who visits all of the Seamen's Bank branches or drops in to any one branch over a period of time, will see one of the largest collections of 19th century maritime Americana in existence. Their locations in Manhattan, in addition to the main office at 30 Wall Street, are 25 Pine Street, 15 Beaver Street, 546 Fifth Avenue at 45th Street, 666 Fifth Avenue at 52nd Street, and 127 West 50th Street in the Time and Life Building. The Nassau County branch is at 2469 Hempstead Turnpike, East Meadow.