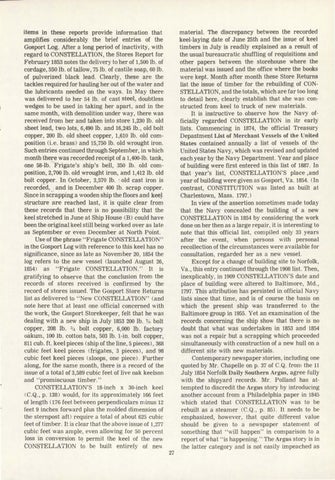 material. The discrepancy between the recorded keel-laying date of June 25th and the issue of keel timbers in July is readily explained as a result of the usual bureaucratic shuffling of requisitions and other papers between the storehouse where the material was issued and the office where the books were kept. Month after month these Store Returns list the issue of timber for the rebuilding of CONSTELLATION, and the totals, which are far too long to detail here, clearly establish that she was cone structed from keel to truck of new materials. It is instructive to observe how the Navy officially regarded CONSTELLATION in itf early lists. Commencing in 1874, the official Treasury Depar:tment List of Merchant Vessels of the United States contained annually a list of vessels of the United States Navy, which was revised and updated each year by the Navy Department. Year and place of building were first entered in this list of 1887. In that year's list, CONSTELLATION'S place ,and year of building were given as Gosport, Va. 1854. (In contrast, CONSTITUTION was listed as built at Charlestown, Mass. 1797.) In view of the assertion sometimes made today that the Navy concealed the building of a new CONSTELLATION in 1854 by considering the work done on her then as a large repair, it is interesting to note that this official list, compiled only 33 years after the event, when persons with personal recollection of the circumstances were available for consultation, regarded her as a new vessel. Except for a change of building site to Norfolk, Va., this entry continued through the 1908 list. Then, inexplicably, in 1909 CONSTELLATION'S date and place of building were altered to Baltimore, Md., 1797. This attribution has persisted in official Navy lists since that time, and is of course the basis on which the present ship was transferred to the Baltimore group in 1955. Yet an examination of the records concerning the ship show that there is no doubt that what was undertaken in 1853 and 1854 was not a repair but a scrapping which proceeded simultaneously with construction of a new hull on a different site with new materials. Contemporary newspaper stories, including one quoted by Mr. Chapelle on p. 37 of C.Q. from the 11 July 1854 Norfolk Daily Southern Argus, agree fully with the shipyard records . Mr. Polland has attempted to discredit the Argus story by introducing another account from a Philadelphia paper in 1845 which stated that CONSTELLATION was to be rebuilt as a steamer (C.Q., p. 85) . It needs to be emphasized, however, that quite different value should be given to a newspaper statement of something that "will happen" in comparison to a report of what "is happening." The Argus story is in the latter category and is not easily impeached as

items in these reports provide information that amplifies considerably the brief entries of the Gosport Log. After a long period of inactivity, with regard to CONSTELLATION, the Stores Report for February 1853 notes the delivery to her of 1,500 lb. of cordage, 550 lb. of tallow, 75 lb. of castile soap, 60 lb. of pulverized black lead. Clearly, these are the tackles required for hauling her out of the water and the lubricants needed on the ways. In May there was delivered to her 54 lb. of cast steel, doubtless wedges to be used in taking her apart, and in the same month, with demolition under way, there was received from her and taken into store 1,230 lb. old sheet lead, two lots, 6,490 lb. and 16,245 lb., old bolt copper, 200 lb. old sheet copper, 1,610 lb. old composition (i.e. brass) and 15,750 lb. old wrought iron. Such entries continued through September, in which month there was recorded receipt of a 1,400-lb. tank, one 58-lb .._Frigate's ship's bell, 350 lb. old composition, 2,700 lb. old wrought iron, and 1,412 lb. old bolt copper. In October, 3,570 lb. '.Âˇold cast iron is recorded, , and in December 400 lb. scrap copper. Since in scrapping a wooden ship the floors and keeJ structure are reached last, it is quite clear from these records that there is no possibility that the keel stretched in June at Ship House (B) could have been the original keel still being worked over as late as September or even December at North Point. Use of the phrase "Frigate CONSTELLATION" in the Gosport Log with reference to this keel has no significance, since as late as November 20, 1854 the log refers to the new vessel (launched August 26, 1854) as "Frigate CONSTELLATION." It is gratifying to observe that the conclusion from the records of stores received is confirmed by the record of stores issued. The Gosport Store Returns list as delivered to "New CONSTELLATION" (and note here that at least one official concerned with the work, the Gosport Storekeeper, felt that he was dealing with a new ship in July 1853 200 lb. % bolt copper, 208 lb. % bolt copper, 6,000 lb. factory oakum, 100 lb. cotton bats, 503 lb. 1-in. bolt copper, 811 cub. ft. keel pieces (ship of the line, 5 pieces) , 368 cubic feet keel pieces (frigates, 3 pieces), and 98 cubic feet keel pieces (sloops, one piece) . Further along, for the same month, there is a record of the issue of a total of 3,589 cubic feet of live oak keelson and "promiscuous timber." CONSTELLATION'S 18-inch x 30-inch keel <C.Q., p. 138) would, for its approximately 166 feet of length (176 feet between perpendiculars minus 12 feet 9 inches forward plus the molded dimension of the sternpost aft) require a total of about 625 cubic feet of timber. It is clear that the above issue of 1,277 cubic feet was ample, even allowing for 50 percent loss in conversion ti! permit the keel of the new CONSTELLATION to be built entirely of !le\\ 27