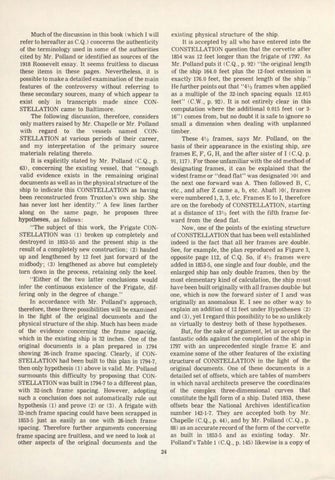 existing physical structure of the ship. It is accepted by all who have entered into the CONSTELLATION question that the corvette after 1854 was 12 feet longer than the frigate of 1797. As Mr. Polland puts it (C.Q., p. 92) "the original length of the ship 164.0 feet plus the 12-foot extension is exactly 176.0 feet, the present length of the ship." He further points out that "4 1/2 frames when applied as a multiple of the 32-inch spacing equals 12.015 feet " <C.W., p. 92). It is not entirely clear in this computation where the additional 0.015 feet <or 316") comes from , but no doubt it is safe to ignore so small a dimension when dealing with unplanned timber. These 4112 frames , says Mr. Polland, on the basis of their appearance in the existing ship, are frames E , F, G, H, and the after sister of I (C.Q. p. 91, 117) . For those unfamiliar with the old method of designating frames, it can be explained that the widest frame or "dead flat" was designated )0( and the next one forward was A. Then followed B, C, etc. , and after Z came a, b, etc. Abaft )0(, frames were numbered 1, 2, 3, etc. Frames E to I, therefore are on the forebody of CONSTELLATION , starting at a distance of 13 1/2 feet with the fifth frame forward from the dead flat. Now, one of the points of the existing structure of CONSTELLATION that has been well established indeed is the fact that all her frames are double. See, for example, the plan reproduced as Figure 3, opposite page 112, of C.Q. So, if 4112 frames were added in 1853-5, one single and four double, and the enlarged ship has only double frames, then by the most elementary kind of calculation, the ship must have been built originally with all frames doub le but one, which is now the forward sister of I and was originally an anomalous E. I see no other w ay to explain an addition of 12 feet under Hypotheses (2) and (3), yet I regard this possibility to be so unlikely as virtually to destroy both of these hypotheses. But, for the sake of argument, let us accept the fantastic odds against the completion of the ship in 1797 with an unprecedented single frame E and examine some of the other features of the existing structure of CONSTELLATION in the light of the original documents. One of these document s is a detailed set of offsets, which are tables of numbers in which naval architects preserve the coordinates of the complex three-dimensional curves that constitute the h,,ull form of a ship. Dated 1853, these offsets bear the National Archives identification number 142-1-7. They are accepted both by l\1r. Chapelle (C.Q., p. 44 ), and by Mr. Polland <C.Q., p. 88 ) as an accurate record of the form of the corvette as built in 1853-5 and as existing today . Mr. Polland's Table 1 (C.Q., p. 145) likewise is a copy of

Much of the discussion in this book <which I will refer to hereafter as C.Q.) concerns the authenticity of the terminology used in some of the authorities cited by Mr. Polland or identified as sources of the 1918 Roosevelt essay. It seems fruitless to discuss these items in these pages . Nevertheless, it is possible to make a detailed examination of the main features of the controversy without referring to these secondary sources, many of which appear to exist only in transcripts made since CONSTELLATION came to Baltimore. The following discussion, therefore, considers only matters raised by Mr. Chapelle or Mr. Polland with regard to the vessels named CONSTELLATION at various periods of their career, and my interpretation of the primary source materials relating thereto. It is explicitly stated by Mr. Polland <C.Q., p. 63), concerning the existing vessel, that "enough valid evidence exists in the remaining original documents as well as in the physical structure of the ship to indicate this CONSTELLATION as having been reconstructed from Truxton's own ship. She has never lost her identity." A few lines farther along on the same page, he proposes three hypotheses, as follows : "The subject of this work, the Frigate CONSTELLATION was (1 ) broken up completely and destroyed in 1853-55 and the present ship is the result of a completely new construction; (2) hauled up and lengthened by 12 feet just forward of the midbody; (3) lengthened as above but completely torn down in the process, retaining only the keel. " Either of the two latter conclusions would infer the continuous existence of the Frigate, differing only in the degree of change." In accordance with Mr. Polland's approach, therefore, these three possibilities will be examined in the light of the original documents and the physical structure of the ship. Much has been made of the evidence concerning the frame spacirig, which in the existing ship is 32 inches. One of the original documents is a plan prepared in 1794 showing 26-inch frame spacing. Clearly, if CONSTELLATION had been built to this plan in 1794-7, then only hypothesis (1 ) above is valid. Mr. Polland surmounts this difficulty by proposing that CONSTELLATION was built in 1794-7 to a different plan, with 32-inch frame spacing. However, adopting such a conclusion does not automatically rule out hypothesis (1) and prove (2) or (3). A frigate with 32-inch frame spacing could have been scrapped in 1853-5 just as easily as one with 26-inch frame spacing. Therefore further arguments concerning frame spacing are fruitless, and we need to look at other aspects of the original documents and the 24