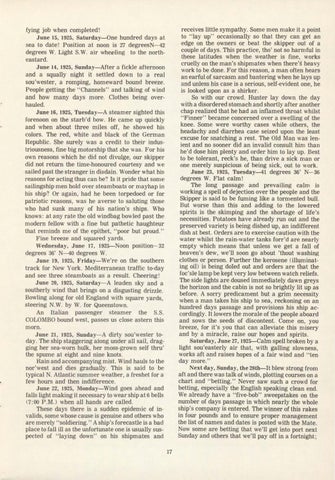 receives little sympathy. Some men make it a point to "lay up" occasionally so that they can get an edge on the owners or beat the skipper out of a couple of days . This practice, tho' not so harmful in these latitudes when the weather is fine , works cruelly on the man's shipmates when there's heavy work to be done. For this reason, a man often hears an earful of sarcasm and bantering when he lays up and unless his case is a serious, self-evident one, he is looked upon as a shirker. So with our crowd. Hunter lay down the day with a disordered stomach and shortly after another chap realized that he had an inflamed throat whilst " Finner" became concerned over a swelling of the knee. Some were worthy cases while others, the headachy and diarrhea case seized upon the least excuse for snatching a rest. The Old Man was lenient and no sooner did an invalid consult him than he'd dose him plenty and order him to lay up. Best to be tolerant, reck's he, than drive a sick man or one merely suspicious of being sick, out to work. June 23, 1925, Tuesday-41 degrees 36' N- 36 degrees W. Flat calm! The long passage and prevailing calm is working a spell of dejection over the people and the Skipper is said to be fuming like a tormented bull. But worse than this and adding to the lowered spirits is the skimping and the shortage of life's necessities. Potatoes have already run out and the preserved variety is being dished up, an indifferent dish at best. Orders are to exercise caution with the water whilst the Âˇr ain-water tanks forr'd are nearly empty which means that unless we get a fall of heaven's dew, we'll soon go about 'thout washing clothes or person. Further the kerosene (illuminating oil) is being doled out and orders are that the foc 'sle lamp be kept very low between watch reliefs. The side lights are doused immediately dawn greys the horizon and the cabin is not so brightly lit up as before. A sorry predicament but a grim necessity when a man takes his ship to sea, reckoning on an hundred days passage and provisions his ship accordingly. It lowers the morale of the people aboard and sows the seeds of discontent. Come on, you breeze, for it's you that can alleviate this misery and by a miracle, raise our hopes and spirits. Saturday, June 27, 1925-Calm spell broken by a light sou'easterly air that, with galling slowness, works aft and raises hopes of a fair wind and " ten day more." Next day, Sunday, the 28th-It blew strong from aft and there was talk of winds, plotting courses on a chart and " betting." Never saw such a crowd for betting, especially the English speaking clean end. We already have a "five-bob" sweepstakes on the number of days passage in which nearly the whole ship's company is entered. The winner of this rakes in four pounds and to ensure proper management the list of names and dates is posted with the Mate. Now some are betting that we'll get into port next Sunday and others that we'll pay off in a fortnight ;

fying job when completed! June 15, 1925, Saturday-One hundred days at sea to date! Position at noon is 27 degreesN--42 degrees W. Light S.W. air wheeHng to the northeastard. June 14, 1925, Sunday-After a fickle afternoon and a squally night it settled down to a real sou'wester, a romping, homeward bound breeze. People getting the "Channels" and talking of wind and how many days more. Clothes being overhauled. June 16, 1925, Tuesday-A steamer sighted this forenoon on the starb'd bow. He came up quickly and when about three miles off, he showed his colors. The red, white and black of the German Republic . She surely was a credit to their industriousness, fine big motorship that she was. For his own reasons which he did not divulge, our skipper did not return the time-honoured courtesy and we sailed past the stranger in disdain . Wonder what his reasons for acting thus can be'? Is it pride that some sailingship men hold over steamboats or mayhap in his ship'? Or again, had he been torpedoed or for patriotic reasons, was he averse to saluting those who had sunk many of his nation's ships . Who knows : at any rate the old windbag bowled past the modern fellow with a fine but pathetic haughteur that reminds me of the epithet, " poor but proud." Fine breeze and squared yards . Wednesday, June 17, 1925-Noon position- 32 degrees 36' N--40 degrees W. June 19, 1925, Friday-We're on the southern track for New York. Mediterranean traffic to-day and see three steamboats as a result. Cheering ! June 20, 1925, Saturday-A leaden sky and a southerly wind that brings on a disgusting drizzle. Bowling along for old England with square yards, steering N.W. by W. for Queenstown. An Italian passenger steamer the S.S. COLOMBO bound west, passes us close astern this morn. June 21, 1925, Sunday- A dirty sou'wester today . The ship staggering along under all sail, dragging her sea-worn hulk, her moss-grown self thru' the spume at eight and nine knots. Rain and accompanying mist. Wind hauls to the nor'west and dies gradually. This is said to be typical N. Atlantic summer weather, a freshet for a few hours and then indifference. June 22, 1925, Monday-Wind goes ahead and falls light making it necessary to wear ship at 6 bells (7:00 P.M.) when all hands are called. These days there is a sudden epidemic of invalids, some whose cause is genuine and others who are merely " soldiering." A ship's forecastle is a bad place to fall ill as the unfortunate one is usually suspected of " laying down" on his shipmates and 17