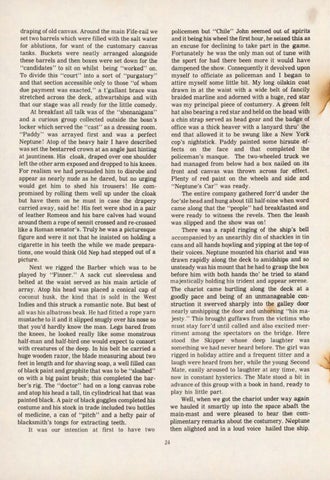 draping of old canvas. Around the main Fife-rail we set two barrels which were filled with the salt water for ablutions, for want of the customary canvas tanks . Buckets were neatly arranged alongside these barrels and then boxes were set down for the &quot;candidates&quot; to sit on whilst being &quot;worked&quot; on. To divide this &quot;court&quot; into a sort of &quot;purgatory&quot; and that section accessible only to those &quot;of whom due payment was exacted,&quot; a t&#39;gallant brace was stretched across the deck, athwartships and with that our stage was all ready for the little comedy. At breakfast all talk was of the &quot;shenanigans&quot; and a curious group collected outside the bosn&#39;s locker which served the &quot;cast&quot; as a dressing room. &quot;Paddy&quot; was arrayed first and was a perfect Neptune! Atop of the heavy hair I have described was set the bestarred crown at an angle just hinting at jauntiness. His cloak, draped over one shoulder left the other arm exposed and dropped to his knees. For realism we had persuaded him to disrobe and appear as nearly nude as he dared, but no urging would get him to shed his trousers! He compromised by rolling them well up under the cloak but have them on he must in case the drapery carried away, said he! His feet were shod in a pair of leather Romeos and his bare calves had wound around them a rope of sennit crossed and re-crossed like a Roman senator&#39;s. Truly he was a picturesque figure and were it not that he insisted on holding a cigarette in his teeth the while we made preparations, one would think Old Nep had stepped out of a picture. Next we rigged the Barber which was to be played by &quot;Finner.&quot; A sack cut sleeveless and belted at the waist served as his main article of array. Atop his head was placed a conical cap of coconut husk , the kind that is sold in the West Indies and this struck a romantic note. But best of all was his albatross beak . He had fitted a rope yarn mustache to it and it slipped snugly over his nose so that you&#39;d hardly know the man. Legs bared from the knees , he looked really like some monstrous half-man and half-bird one would expect to consort with creatures of the deep. In his belt he carried a huge wooden razor, the blade measuring about two feet in length and for shaving soap, a well filled can of black paint and graphite that was to be &quot;sloshed&quot; on with a big paint brush; this completed the barber&#39;s rig. The &quot;doctor&quot; had on a long canvas robe and atop his head a tall, tin cylindrical hat that was painted black. A pair of black goggles completed his costume and his stock in trade included two bottles of medicine, a can of &quot;pitch&quot; and a hefty pair of blacksmith&#39;s tongs for extracting teeth. It was our intention at first to have two

policemen but &quot;Chile&quot; John seemed out of. spirits and it being his wheel the first hour, he seized this as an excuse for declining to take part in the game. Fortunately he was the only man out of tune with the sport for had there been more it would have dampened the show. Consequently it devolved upon myself to officiate as policeman and I began to attire myself some little bit. My long oilskin coat drawn in at the waist with a wide belt of fancily braided marline and adorned with a huge, red star was my principal piece of costumery. A green felt hat also bearing a red star and held on the head with a chin strap served as head gear and the badge of office was a thick heaver with a lanyard thru&#39; the end that allowed it to be swung like a New York cop&#39;s nightstick. Paddy painted some hirsute .effects on the face and that completed the policeman&#39;s masque. The two-wheeled truck we had managed from below had a box nailed on its front and canvas was thrown across for effect. Plenty of red paint on the wheels and side and &quot;Neptune&#39;s Car&quot; was ready. The entire company gathered forr&#39;d under the foc&#39;sle head and hung about till half-nine when .word came along that the &quot;people&quot; had breakfasted and were ready to witness the revels. Then the leash was slipped and the show was on! There was a rapid ringing of the ship&#39;s bell accompanied by an unearthly din of shackles in tin cans and all hands ho~ling and yipping at the top of their voices. Neptune mounted his chariot and was drawn rapidly along the deck to amidships and so unsteady was his mount that he had to grasp the box before him with both hands tho&#39; he tried to stand majestically holding his trident and appear serene. The chariot came hurtling along the deck at a goodly pace and being of an unmanageable construction it swerved sharply into the galley door nearly unshipping the door and unhorsing &quot;his majesty.&quot; This brought guffaws from the victims who must stay forr &#39;d until called and also excited merriment among the spectators on the bridge. Here stood the Skipper whose deep laughter was something we had never heard before. The girl was rigged in holiday attire and a frequent titter and a laugh were heard from her, while the young Second Mate, easily aroused to laughter at any time, was now in constant hysterics. The Mate stood a bit in advance of this group with a book in hand, ready to play his little part. Well, when we got the chariot under way again we hauled it smartly up into the space atnaft the main-mast and were pleased to hear thte complimentary remarks about the costumery. 1&#39;.1Jeptune then alighted and in a loud voice hailed thle ship. :24