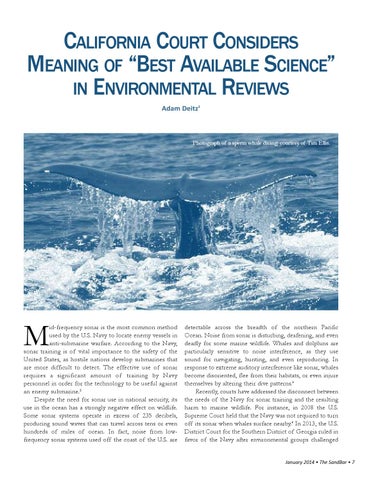 Photograph of a sperm whale diving; courtesy of Tim Ellis.

id-frequency sonar is the most common method used by the U.S. Navy to locate enemy vessels in anti-submarine warfare. According to the Navy, sonar training is of vital importance to the safety of the United States, as hostile nations develop submarines that are more difficult to detect. The effective use of sonar requires a significant amount of training by Navy personnel in order for the technology to be useful against an enemy submarine.2 Despite the need for sonar use in national security, its use in the ocean has a strongly negative effect on wildlife. Some sonar systems operate in excess of 235 decibels, producing sound waves that can travel across tens or even hundreds of miles of ocean. In fact, noise from lowfrequency sonar systems used off the coast of the U.S. are

detectable across the breadth of the northern Pacific Ocean. Noise from sonar is disturbing, deafening, and even deadly for some marine wildlife. Whales and dolphins are particularly sensitive to noise interference, as they use sound for navigating, hunting, and even reproducing. In response to extreme auditory interference like sonar, whales become disoriented, flee from their habitats, or even injure themselves by altering their dive patterns.3 Recently, courts have addressed the disconnect between the needs of the Navy for sonar training and the resulting harm to marine wildlife. For instance, in 2008 the U.S. Supreme Court held that the Navy was not required to turn off its sonar when whales surface nearby.4 In 2013, the U.S. District Court for the Southern District of Georgia ruled in favor of the Navy after environmental groups challenged January 2014 • The SandBar • 7 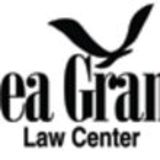 The SandBar is a quarterly publication reporting on legal issues affecting the U.S. oceans and coasts. Its goal is to increase awareness and...

The SandBar is a quarterly publication reporting on legal issues affecting the U.S. oceans and coasts. Its goal is to increase awareness and...