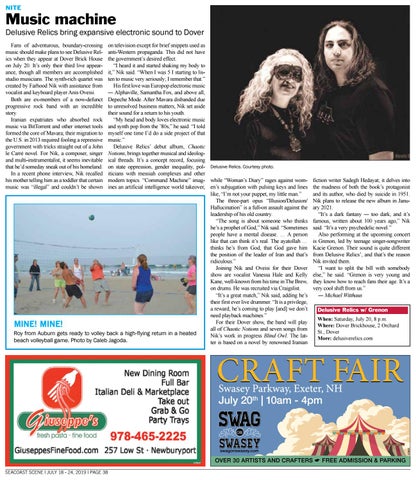 Delusive Relics bring expansive electronic sound to Dover on television except for brief snippets used as anti-Western propaganda. This did not have the government’s desired effect. “I heard it and started shaking my body to it,” Nik said. “When I was 5 I starting to listen to music very seriously; I remember that.” His first love was Europop electronic music — Alphaville, Samantha Fox, and above all, Depeche Mode. After Mavara disbanded due to unresolved business matters, Nik set aside their sound for a return to his youth. “My head and body loves electronic music and synth pop from the ’80s,” he said. “I told myself one time I’d do a side project of that music.” Delusive Relics’ debut album, Chaotic Notions, brings together musical and ideological threads. It’s a concept record, focusing on state oppression, gender inequality, pol- Delusive Relics. Courtesy photo. iticians with messiah complexes and other modern topics. “Command Machine” imag- while “Woman’s Diary” rages against womines an artificial intelligence world takeover, en’s subjugation with pulsing keys and lines like, “I’m not your puppet, my little man.” The three-part opus “Illusion/Delusion/ Hallucination” is a full-on assault against the leadership of his old country. “The song is about someone who thinks he’s a prophet of God,” Nik said. “Sometimes people have a mental disease. … A person like that can think it’s real. The ayatollah … thinks he’s from God, that God gave him the position of the leader of Iran and that’s ridiculous.” Joining Nik and Oveisi for their Dover show are vocalist Vanessa Hale and Kelly Kane, well-known from his time in The Brew, on drums. He was recruited via Craigslist. “It’s a great match,” Nik said, adding he’s their first ever live drummer. “It is a privilege, a reward, he’s coming to play [and] we don’t need playback machines.” For their Dover show, the band will play MINE! MINE! all of Chaotic Notions and seven songs from Roy from Auburn gets ready to volley back a high-flying return in a heated Nik’s work in progress Blind Owl. The latbeach volleyball game. Photo by Caleb Jagoda. ter is based on a novel by renowned Iranian

Fans of adventurous, boundary-crossing music should make plans to see Delusive Relics when they appear at Dover Brick House on July 20. It’s only their third live appearance, though all members are accomplished studio musicians. The synth-rich quartet was created by Farhood Nik with assistance from vocalist and keyboard player Anis Oveisi. Both are ex-members of a now-defunct progressive rock band with an incredible story. Iranian expatriates who absorbed rock music via BitTorrent and other internet tools formed the core of Mavara; their migration to the U.S. in 2013 required fooling a repressive government with tricks straight out of a John le Carré novel. For Nik, a composer, singer and multi-instrumentalist, it seems inevitable that he’d someday sneak out of his homeland. In a recent phone interview, Nik recalled his mother telling him as a toddler that certain music was “illegal” and couldn’t be shown

fiction writer Sadegh Hedayat; it delves into the madness of both the book’s protagonist and its author, who died by suicide in 1951. Nik plans to release the new album in January 2021. “It’s a dark fantasy — too dark, and it’s famous, written about 100 years ago,” Nik said. “It’s a very psychedelic novel.” Also performing at the upcoming concert is Grenon, led by teenage singer-songwriter Kacie Grenon. Their sound is quite different from Delusive Relics’, and that’s the reason Nik invited them. “I want to split the bill with somebody else,” he said. “Grenon is very young and they know how to reach fans their age. It’s a very cool shift from us.” — Michael Witthaus Delusive Relics w/ Grenon When: Saturday, July 20, 8 p.m. Where: Dover Brickhouse, 2 Orchard St., Dover More: delusiverelics.com 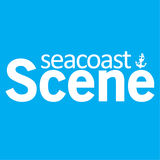