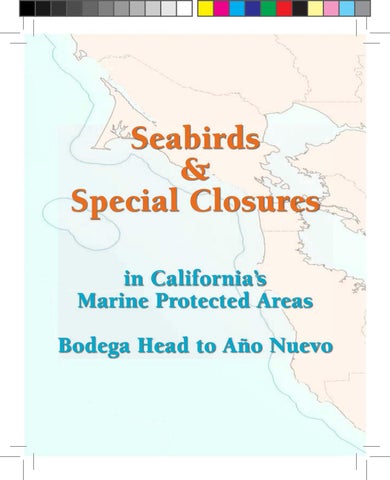 Protecting Our Seabirds Seabirds are recovering from a history of human activities, including hunting, egg collecting, gill-net fishing and oil spills. Protecting seabird breeding colonies helps build resilient seabird populations that are more capable of withstanding the myriad of threats facing them today. Seabirds spend their lives traveling the worldâ&#x20AC;&#x2122;s oceans, but must return to land to breed and raise their young. Seabirds depend on safe places to nest, and abundant fish and invertebrates to feed their fast-growing chicks. Many seabird species lay only one egg a year or breed only every other year. This low reproductive rate makes seabirds extremely vulnerable to disturbance. Seabirds nest on offshore rocks, islands and steep mainland cliffs away from predators. Some species are highly site-specific, returning each year to the same nest site. Non-breeding birds also regularly return to the colony where they were born. Seabirds and marine mammals are sensitive to disturbance. Human disturbance harms seabirds by disrupting their natural behaviors, such as breeding, resting and feeding.

e 1,000 feet away (3 football fields) from cliffs, offshore rocks and islands where seabirds nest and rest. bserve birds for signs you are too close. Headbobbing or wing-fluttering means “move away.” lways discard fishing line in the trash — not overboard. Cover bait. Use barbless hooks or artificial lures. ake precautions — prevent oil and fuel spills. Properly dispose of all hazardous waste. ewage is pollution. Use marine toilets, responsibly.

ass at a distance, so you don’t disturb wildlife. void sensitive seabird areas (stay back 1,000 feet or 3 football fields). iscreet viewing (use binoculars to see wildlife from a safe distance). epart immediately when you observe wildlife behavior changes. eave wildlife alone and do not attempt to rescue or feed them. xplain to others: protecting wildlife protects paddling access.

Californiaâ&#x20AC;&#x2122;s Marine Protected Areas California is the first state in the nation to establish a system of marine protected areas (MPAs). Similar to our national parks, MPAs are designed to help protect and restore ocean habitats, and improve the health, productivity and resilience of ocean ecosystems. Under the Marine Life Protection Act, California created a network of more than 120 MPAs along Californiaâ&#x20AC;&#x2122;s outer coast, extending from Oregon to Mexico. MPAs are areas of the ocean where human activities are limited or restricted in order to conserve marine life and habitats. Some areas have been designated as Special Closures. Special Closures are part of the network of MPAs, and protect resting and nesting seabirds and provide safe havens for resting marine mammals. The objective of Special Closures is simple: minimize disturbance from close-approaching watercraft by prohibiting access near sensitive seabird and marine mammal areas. For detailed information on MPA and Special Closure boundaries, coordinates and regulations visit www.dfg.ca.gov/marine/mpa

Did You Know? u During the 1906 San Francisco earthquake, the Point Reyes Lighthouse moved 18 feet in less than a minute. u Point Reyes is the windiest place on the Pacfic Coast – highest recorded wind speed is 133 mph!

Did You Know? u Seabirds can drink seawater. They have special glands that remove and expel the extra salt. This is why gulls often look like they have a “runny nose.”

Did You Know? u Harbor seals raise their pups on the beaches near Double Point. Point Reyes National Seashore has the largest population of harbor seals in California, excluding the Channel Islands.

Egg (Devil’s Slide) Rock A 1986 oil spill was the last punch in a series of harmful activities that wiped out the breeding colony of 3,000 Common Murres at Devil’s Slide. A decade later, the U.S. Fish and Wildlife Service began a large and successful restoration project. Using decoys, mirrors and Common Murre recordings, biologists lured the birds back to the rock. Today, Devil’s Slide Rock and the nearby mainland are home to five species of breeding seabirds. All human activity is prohibited within 300 feet of Devil’s Slide Rock, year-round. No transit between the rock and the mainland.

Did You Know? u Common Murre can live up to 27 years. Adults return to the same place every year to breed.

SPECIAL CLOSURE: Except as permitted by federal law, or a hazardous weather emergency, no vessel shall operate or anchor 1,000 feet from North Farallon Island, or 300 feet from the 3 southern islets, including the Isle of St. James, in the vicinity of 1 37°46.00’N, 123°06.00’W (regulations abbr). The waters surrounding North Farallon Islands are a no-take state marine reserve

Did You Know? u The North Farallon Islands are 18 miles southwest of Point Reyes. They consist of four column-like blocks of granite reaching heights of 78 to 112 feet.

SPECIAL CLOSURE: Except as permitted by federal law, or a hazardous weather emergency, no vessel shall operate or anchor 300 feet from any shoreline of Southeast Farallon Island, year-round. A seasonal 300 foot Special Closure exists between Fisherman’s Bay and East Landing, and the area southwest of East Landing to the southeast side of Saddle (Seal) Rock from Dec. 1–Sept. 14, only (regulations abbr). The waters surrounding Southeast Farallon Island are a no-take state marine reserve

Did You Know? u During the San Francisco Gold Rush (1848-1855), eggs for bakeries and restaurants came from seabirds living on Southeast Farallon Island.

he California Current extends along the western coast of North America from southern Canada to northern Mexico, and is one of the most biologically productive regions in the world. This diverse and productive marine ecosystem supports an abundance of wildlife, including marine mammals and seabirds.

Sooty Shearwater: • Travel 40,000 miles annually – New Zealand to Monterey Bay, and back to New Zealand • Have a life span of ~35 years • Breed on islands in New Zealand and raise a single chick each year • Gather in flocks of 100’s of 1000’s along the California coast Ron LeValley

Black Oystercatcher: • Eat mussels and limpets found along rocky shorelines • Have a life span of ~40 years • Lay 1-3 eggs in intertidal habitat, and can use the same nest site for several years • California population is ~4,000 individuals • Found along the West Coast from the Aleutian Islands, Alaska to Baja, California Hollis Bewley

Brown Pelican: • Can hold over 2 gallons of water in their throat pouch • Oldest known individual: 43 years • Can lay up to 3 eggs Jason Thompson in nests on the ground or in trees • Breed on Anacapa and Santa Barbara Islands; these are the only breeding colonies in the western United States • Breeding range: Channel Islands to central Mexico

Black-footed Albatross: • Drink seawater; excrete excess salt through glands above eyes • Banded individuals have lived at least 40 years • Lay one egg per year and nest primarily on Hawaiian Islands • Locate food with keen sense of smell, while wandering the northern Pacific for most of the year

Western Gull: • More than 30% of the total world population nests on Southeast Farallon Island, California • Maximum life span is 20–25 years; 10–15 is typical • Build nests on offshore rocks and islands; nest is made with vegetation, feathers, rope, plastic, and other found items • Have pink legs • Breeding range: Washington to central Baja Ron LeValley California Gull: • Aided Mormon settlers in Utah, helping rid their crops of grasshoppers • Oldest known banded recovery is 27 years • Breeds on islands in lakes or rivers • Opportunistic feeder; runs through dense groups of alkali flies with its head down and mouth open, eating flies • Have yellow bill with black ring near the tip Susan Euing • Have yellow-green legs

Double-crested Cormorant: • Feathers are not waterproof; must dry their wings • Oldest banded bird: 17 years • Can lay 4 eggs/year in nests on the ground, on cliff edges, or in trees and shrubs • Most widely distributed cormorant– Aleutian Islands, Alaska to Mexico • During breeding season – throat Jamie Hall turns yellow Brandt’s Cormorant: • Can dive 40 feet in pursuit of prey; webbed feet serve as propellers to feed on bottom fish • Maximum known life span is 18 years • Can lay 1-4 eggs in nest on cliffs, islands and offshore rocks • Breed along the Pacific Coast from Alaska to Mexico • During breeding season their expandable throat pouch turns blue Roy Lowe

Rhinoceros Auklet: • Delivers food to the nest in the dark of night • Lays 1 egg in burrows 1–5 meters deep in soil • Dive underwater to capture prey, using wings to swim Ron LeValley • Dark gray with white belly; breeding males and females bear a “horn” on the base of the bill

Leach’s Storm-Petrel: • Fly like butterflies over the ocean, skimming food from the surface • Can live up to 24 years • Lay one egg in Steven Round burrows on small offshore islands • Small secretive seabird – 8 inches in length Ashy Storm-Petrel: • Found only in California and northwestern Baja, Mexico • Can live up to 34 years • Lay one egg/year in rock crevices on offshore rocks, and under driftwood in sea caves • Breeding population estimated between 5,200-10,000 birds – over half nest on the Farallon Islands Mike Danzenbaker

How You Can Help Actions to Protect Seabirds • Stay 1,000 feet (3 football fields) away from colonies where seabirds rest and nest • If you see birds head bobbing, calling, fluttering or flying away, you are too close – move away.

Getting Close to Seabirds During Breeding Season Can: • Scare birds off their nests • Dislodge eggs and chicks from nest sites • Allow predators to feed on eggs and chicks • Lead to deaths when eggs/chicks are without parents • Force chicks to leave the nest too soon and drown Any human activity that causes flushing, displacement, agitation or harm to wildlife is a disturbance. Federal law prohibits any act, including operating any watercraft, that results in a disturbance of seabirds, marine mammals or sea turtles.

Together... We Can Protect Wildlife The Seabird Protection Network is a multi-

California Department of Fish and Wildlife

maintains native fish, wildlife, plant species and natural communities for their intrinsic and ecological value and their benefits to people. The Department is also responsible for the diversified use of fish and wildlife including recreational, commercial, scientific and educational uses. For complete regulations, visit www.dfg.ca.gov/marine/mpa.

Funded by the National Fish and Wildlife Foundation