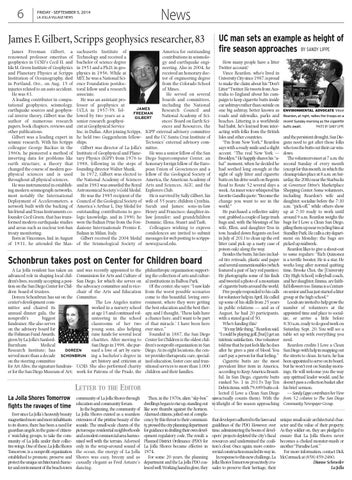 James F. Gilbert, Scripps geophysics researcher, 83 James Freeman Gilbert, a renowned professor emeritus of geophysics in UCSD’s Cecil H. and Ida M. Green Institute of Geophysics and Planetary Physics at Scripps Institution of Oceanography, died in Portland, Ore., on Aug. 15 of injuries related to an auto accident. He was 83. A leading contributor in computational geophysics, seismology, earthquake sources and geophysical inverse theory, Gilbert was the author of numerous research papers, book chapters, reviews and other publications. Gilbert was a leading expert in seismic research. With his Scripps colleague George Backus in the 1960s, he pioneered a method of inverting data for problems like earth structure, a theory that changed the course of modern geophysical sciences and is used throughout all physical sciences. He was instrumental in establishing modern seismograph networks, most notably the International Deployment of Accelerometers, a network built with the backing of his friend and Texas Instruments cofounder Cecil Green, that has transformed modern earthquake studies and areas such as nuclear test-ban treaty monitoring. Born in Vincennes, Ind. in August of 1931, he attended the Mas-

sachusetts Institute of America for outstanding Technology and received a contributions in seismolobachelor of science degree gy and earthquake engiin 1953 and a Ph.D. in geoneering. Also in 2004, he physics in 1956. While at received an honorary docMIT, he was a National Scitor of engineering degree ence Foundation postdocfrom the Colorado School toral fellow and a research of Mines. associate. He served on several He was an assistant proboards and committees, fessor of geophysics at including the National JAMES UCLA in 1957-59, folResearch Council and FREEMAN lowed by two years as a National Academy of SciGILBERT senior research geophysiences’ Board on Earth Scicist at Geophysical Service ences and Resources, the Inc. in Dallas. After joining Scripps, IGPP external advisory committee he held two Guggenheim fellow- and the UC Santa Cruz Institute of ships. Tectonics’ external advisory comGilbert was director of La Jolla's mittee. Institute of Geophysical and PlaneHe was a senior fellow of the San tary Physics (IGPP) from 1976 to Diego Supercomputer Center, an 1988, following in the steps of honorary foreign fellow of the Eurofounding director Walter Munk. pean Union of Geosciences and a In 1972, Gilbert was elected to fellow of the Geological Society of the National Academy of Sciences America, the American Academy of and in 1981 was awarded the Royal Arts and Sciences, AGU, and the Astronomical Society’s Gold Medal. Explorers Club. He was the 1985 recipient of the He is survived by Sally Gilbert, his Council of the Geological Society of wife of 55 years; children Cynthia, America’s Arthur L. Day Medal for Sarah and James; sons-in-law outstanding contributions to geo- Henry and Francisco; daughter-inlogic knowledge, and in 1990, he law Jennifer; and grandchildren won the Balzan Prize from the Fon- Dominic, Elena, Stuart and Tash. dazione Internazionale Premio E. Colleagues wishing to express Balzan in Milan, Italy. condolences are invited to submit Gilbert received the 2004 Medal messages for web posting to scrippsof the Seismological Society of news@ucsd.edu.

Schonbrun takes post on Center for Children board A La Jolla resident has taken an and was recently appointed to the advanced role in shaping local chil- Commission for Arts and Culture of dren's lives, recently accepting a posi- San Diego, for which she serves on tion on the San Diego Center for Chil- the advocacy committee and is vicedren board of trustees. chair of the Arts and Education Doreen Schonbrun has sat on the Committee. center's development comThe Los Angeles native mittee and chaired its worked in a nursery school annual dinner gala, the at age 15 and continued volunteering in the school nonprofit's biggest classrooms of her two fundraiser. She also serves young sons, also helping on the advisory board for raise funds for several local the Fishman Fund Awards, charities. After moving to given by La Jolla's SanfordSan Diego in 1998, she purBurnham Medical sued a love of art by earnResearch Institute; has DOREEN served more than a decade SCHONBRUN ing a bachelor’s degree in art history and criticism at on the steering committee for Art Alive, the signature fundrais- UCSD. She also performed charity er for the San Diego Museum of Art; work for Patrons of the Prado, the

philanthropic organization supporting the collection of arts and cultural institutions in Balboa Park. Of the center, she says: “I saw kids from the worst possible scenarios come to this beautiful, loving environment, where they were getting the best education and the best therapy, and I thought, ‘These kids have a chance here, and I want to be part of that miracle.’ I have been here ever since.” Founded in 1887, the San Diego Center for Children is the oldest children's nonprofit organization in San Diego. At its eight locations, the center provides therapeutic care, specialized education, foster care and transitional services to more than 1,000 children and their families.

LETTER TO THE EDITOR La Jolla Shores Tomorrow fights the ravages of time Ever since La Jolla’s heavenly beauty magnetized more and more inhabitants to its shores, there has been a need for guardian angels, in the guise of citizens’ watchdog groups, to take the community of La Jolla under their collective wings. One of these, La Jolla Shores Tomorrow, is a nonprofit organization established to promote, preserve and protect the unique architectural character and environment of the beach-town

Then, in the 1970s, alien “sky-box” dwellings began to rise up, standing out like sore thumbs against the horizon. Alarmed citizens, jolted out of complacency by this threat to their community, pressed the city planning department for guidance in drafting their own development regulatory code. The result: a Planned District Ordinance (PDO) for La Jolla Shores became effective in 1974. For some 20 years, the planning department and the La Jolla PDO coalesced well. Working hand in glove, they

UC man sets an example as height of fire season approaches BY SANDY LIPPE How many people have a litter Twitter account? Vince Reardon, who's lived in University City since 1987, is proud to make the claim about his "Don't Litter" Twitter. He tweets from Australia to England about his campaign to keep cigarette butts inside car ashtrays rather than outside on one big ashtray, better known as roads and sidewalks, parks and beaches. Littering is a worldwide bad habit, he's learned from interacting with folks from the British Isles and other countries. "I'm from New York," Reardon says with a ready smile and a slight accent. “The real New York — Brooklyn." He happily shares his “aha!” moment, when he decided he had seethed long enough at the sight of ugly litter and cigarette butts on his drive south on Regents Road to Route 52 several days a week. An inner voice whispered his favorite Gandhi quote: "Become the change you want to see in the world." He purchased a reflective safety vest, grabbed a couple of large trash bags and, with the blessings of his wife, Ellen, and daughter Tess in tow, headed down Regents on foot in July of 2013 to clean up the evil litter (and pick up a nasty case of poison oak) along the way. Besides the butts, his fare included tire retreads, plastic and paper and several unmentionables (which featured a pair of lacy red panties). He photographs some of his finds and tweeted a photo of a mountain of cigarette butts around the world. Five people responded to his calls for volunteer help in April. He called up some of his skills from 25 years in public relations — and as of August, he had 20 participants, with a stated goal of 50. Who's funding this? “It's my little thing,” Reardon said. “I could be playing golf, [but] I get an intrinsic satisfaction. One volunteer told me that he just feels like he does after he gives a pint of blood. You can't pay a person for that feeling.” Cigarette butts are the most prevalent litter item in America, according to Keep America Beautiful. In San Diego, cigarette butts ranked No. 1 in 2013's Top Ten Debris items, with 79,689 butts collected (I Love a Clean San Diego sawactually counts them). With the to itheight of fire season approaching

that developers adhered to the laws and guidelines of the PDO. However, over time, administering the boom of developers’ projects depleted the city’s fiscal resources and undermined the coalition’s clout. Once again, more controversial construction muscled its way in. In response to this new challenge, La Jolla Shores Tomorrow proactively crusades to preserve their heritage, their

ENVIRONMENTAL ADVOCATE Vince Reardon, at right, rallies the troops on a recent Sunday morning as the cigarette butts await. PHOTO BY SANDY LIPPE

and the persistent drought, San Diegans need to get after those folks who toss the butts out their car windows. The volunteers meet at 7 a.m. the second Sunday of every month (except for this month, in which the cleanup takes place at 8 a.m. on Saturday, the 20th) near the Starbucks at Governor Drive's Marketplace Shopping Center. Some volunteers, including Reardon's wife and daughter, socialize before the 7:30 a.m. “pick-off,” while others show up at 7:30 ready to work until around 9 a.m. Reardon weighs the bags for I Love a Clean San Diego, piling them up near recycling bins at Standley Park. He calls a city department on Monday; the bags are picked up midweek. Reardon likes to give a shout-out to some regulars: “Rich Quinonez is a terrific booster, He is a star. He works long after normal quitting time. Brooke Choi, the [University City High School] volleyball coach, and her daughter, Emma, are faithful followers too. Emma is a Centurion senior and has just started a litter group at the high school." Locals are invited to help grow the number of volunteers at the appointed time and place to socialize, or arrive a little before 8:30 a.m. ready to do good work on Saturday, Sept. 20. You will see a table set up with everything you need. Reardon credits I Love a Clean San Diego with help in mapping out the streets to clean. In turn, he has been appointed to serve on its board, but he won't rest on Sunday mornings. He will welcome you the way any spiritual leader would, and he doesn't pass a collection basket after his brief sermon. — Sandy Lippe contributes her View from 52 column to The San Diego Community Newspaper Group.

unique small-scale architectural character and the value of their property. As they soldier on, they are pledged to ensure that La Jolla Shores never becomes a choked monster-mash or another “Paradise Lost.” For more information, contact Dick McCormack at (858) 459-2460. Dianne Schroeder La Jolla 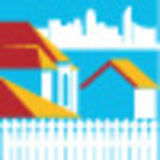