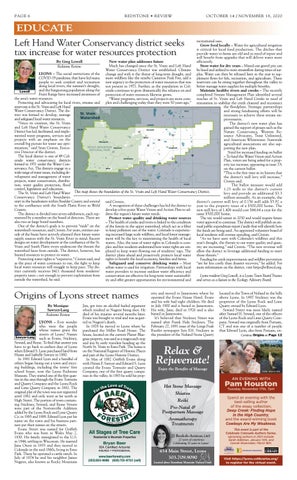 Origins of Lyons street names By Monique Sawyer-Lang Redstone Review LYONS – Ever wonder who were the people whose names grace the streets of Lyons? Names Sawyer-Lang such as Evans, Stickney, Seward, and Reese. To find that answer you have to go back to earliest days of Lyons when Edward S. Lyon purchased land from Hiram and Isabelle Sawyer in 1880. In 1881 Edward Lyon and a handful of others began laying out a town and erecting buildings, including the towns’ first school house, now the Lyons Redstone Museum. They started one of the first quarries in the area through the Evans Townsite and Quarry Company and the Lyons Rock and Lime Quarry Company in 1882. The original plat of the town was not registered until 1882 and only went as far north as High Street. The portion of town containing Stickney, Seward, and Reese Streets were part of the Nortonville Addition added by the Lyons Rock and Lime Quarry Co. in 1885 and 1889. Edward Lyon put his name on the town and his business partners put their names on the streets. Evans Street was named for Griffith Evans who was born in Wales May 2, 1830. His family immigrated to the U.S. in 1844, settling in Wisconsin. He married Jane Owen in 1855 and they moved to Colorado in the mid-1860s, living in Estes Park. There he operated a cattle ranch. In July of 1874 he and his neighbor James Nugent, also known as Rocky Mountain

Jim, got into an alcohol fueled argument which resulted in Nugent being shot. He died of his injuries several months later. Evans was brought to trial and was acquitted in Nugent’s death. In 1878 he moved to Lyons where he purchased the Miller Road House. The house, located on the current Planet Bluegrass property, was used as a stagecoach stop and inn by early travelers heading up the North St. Vrain to Estes Park. The home is on the National Register of Historic Places and part of the Lyons Historic District. In May of 1882 Griffith Evans along with Hiram F. Sawyer and Edward S. Lyon created the Evans Townsite and Quarry Company, one of the first quarry companies in the valley. In 1883 he sold his prop-

erty and moved to Jamestown where he operated the Evans House Hotel. Evans and his wife had eight children. He died in July 1900 and is buried in Jamestown. His wife, Jane, died in 1926 and is also buried in Jamestown. It’s believed that Stickney Street was named after Frank Hale Stickney. The February 27, 1891 issue of the Longs Peak Rustler newspaper lists F.H. Stickney as the president of the Noland Stone Quarry

Relax & Rejuvenate! Enjoy the Benefits of Massage AN EVENING WITH

All Stages of Tree Care

located in the Town of Noland in the hills above Lyons. In 1897 Stickney was the proprietor of the Lyons Rock and Lime Quarry owned by Edward Lyon. Seward Street was most likely named after Samuel H. Seward, one of the officers of the Lyons Rock and Lime Quarry Company. Seward was originally from Putnam, CT and was one of a number of people that Edward Lyon, also from Putnam, en-

Spend an evening with the best-selling author of the essay collection, Deep Creek: Finding Hope in the High Country, and the award-winning book Cowboys Are My Weakness. This event is part of the Celebrate Colorado Authors Series. Upcoming authors in 2021 include: Sarah Adleman, January 14th, and Connie Shoemaker, March 18th. COLORADO HUMANITIES

Visit https://lyons.colibraries.org/ to register for the virtual event. 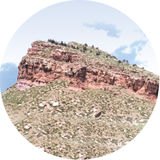