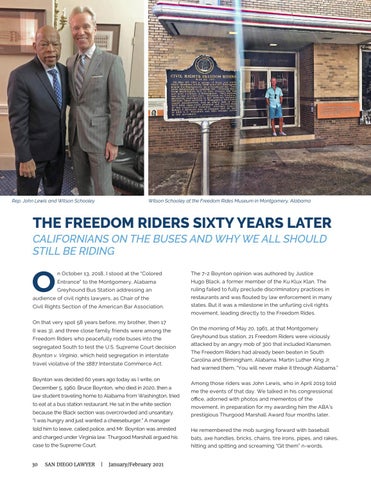 Wilson Schooley at the Freedom Rides Museum in Montgomery, Alabama

The 7-2 Boynton opinion was authored by Justice

Entrance” to the Montgomery, Alabama

Hugo Black, a former member of the Ku Klux Klan. The

audience of civil rights lawyers, as Chair of the

restaurants and was flouted by law enforcement in many

states. But it was a milestone in the unfurling civil rights movement, leading directly to the Freedom Rides.

On that very spot 58 years before, my brother, then 17 (I was 3), and three close family friends were among the Freedom Riders who peacefully rode buses into the segregated South to test the U.S. Supreme Court decision Boynton v. Virginia, which held segregation in interstate travel violative of the 1887 Interstate Commerce Act. Boynton was decided 60 years ago today as I write, on December 5, 1960. Bruce Boynton, who died in 2020, then a law student traveling home to Alabama from Washington, tried to eat at a bus station restaurant. He sat in the white section because the Black section was overcrowded and unsanitary. “I was hungry and just wanted a cheeseburger.” A manager

On the morning of May 20, 1961, at that Montgomery Greyhound bus station, 21 Freedom Riders were viciously attacked by an angry mob of 300 that included Klansmen. The Freedom Riders had already been beaten in South Carolina and Birmingham, Alabama. Martin Luther King Jr. had warned them, “You will never make it through Alabama.” Among those riders was John Lewis, who in April 2019 told me the events of that day. We talked in his congressional office, adorned with photos and mementos of the movement, in preparation for my awarding him the ABA’s prestigious Thurgood Marshall Award four months later.

told him to leave, called police, and Mr. Boynton was arrested

He remembered the mob surging forward with baseball

and charged under Virginia law. Thurgood Marshall argued his

case to the Supreme Court. 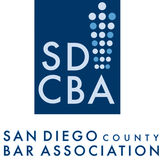