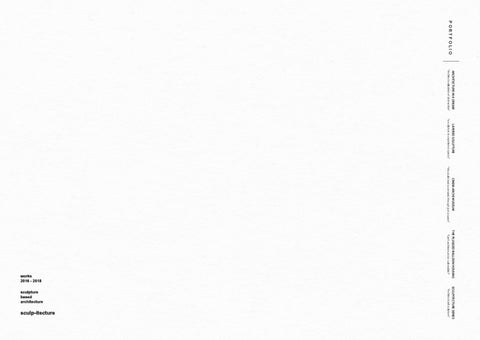 PORTFOLIO “a sculpture to experience spaces”

LAYERED SCULPTURE “We could read a scenario through just a space”

ARCHITECTURE IN A DREAM

ARCHITECTURE IN A DREAM

“We could read a scenario through just a space”

ARCHITECTURE IN A DREAM The purpose of this project was to architectualize an abstraction; a dream. The methods to make a whole structure of a dream and the process of component’s design were based on the precedent researches about a dream. With the researches, two main points were set. The first one was materials of a dream were interests, impressive memories, and past experiences. And the second one was the genuine reality was distorted strangely in a dream. And I designed those dream’s components in a way of maximizing the original features to make a distortion. Because a dream doesn't reflect a reality precisely. These two main points became a big basis of the process of architectualizing a dream.

I have dreamed a lot when I slept. And I could remember well about my dream. In my dream, I would wander everywhere. Sometimes during in my dream I felt that ‘This place is quite familiar. I have been here before when I dreamed.’ So I realized there is a unique world in a dream. Therefore I wanted to architectualize a dream world.

Classifying categories of dream-parts (cf. #1 materials of a dream : interests)

Making methods of organizing a dream in an architectural way 1. spheral shape of the whole dream structure; there is no start and no end in a dream world 2. several holes mean the dream world is changable 3. incomplete buildings 4. intervention of buildings which expresses dramatic change of scenes in a dream 5. irregular scales 6. non-physical phenomenons 7. mixes of the first and third person narratives

COMPONENTS To make components, I divided 4 categories of my interest (design, film, dream and architecture) and selected one or two original sources from the categories. And I designed those dreamâ&#x20AC;&#x2122;s components in a way of exaggerating the original features to make some distortions. Because a dream doesn't reflect reality precisely. And the 6 components were re-organized for the whole structure of a dream according to the characteristics of a dream which were found from researches.

houses where I have lived in

6 components of architecture in a dream (2016) / a digital image

3-dimensional realization through the hologram method

Various scales in a dream

2 “a sculpture to experience a space”

The purpose of this project was to study ‘architectural sculpture’. I have thought that how can I make a sculpture like architecture. The feature of architecture is that audience could walk through to appreciate spaces in an architecture. So I applied this feature to a new sculpture.

There are 10 layers in a sculpture. Audience could pass through it. And they could feel a sense of space in a sculpture like architecture.

Reference. a scene of <the shining> / Stanley Kubrick

In the movie of Stanley Kubrick, we could feel an atmosphere through just a space. In the ‘cinemarchi musuem’, audience were supposed to visit 3 buildings in order. The order follows 4 seasons; spring, summer, fall and winter. And they could read the scenario through just an architecture.

3 “We could read a scenario through just a space”

The sunset dyed the space red like a maple leaf.

After going up the stairs, it rains hard in the hot space.

The monoliths makes water to be cool and the temperature makes you feel cold.

The purpose of this third project was to seek the pure value of architecture. After watching a movie of Stanley Kubric’s <the shining>, I thought we could read a story through just a feeling of space. So I planned to make an architecture that could tell a scenario through just a space. It exists just for pure space aesthetic.

These three architectures mean spring and summer, fall and winter in order. This museum is just an artwork itself.

In the beginning of the museum, audiences could go up the stairs. After looking around, they could go down the stairs to the ‘SPRING’ exhibition hall which is located in the first basement level. At the exhibition hall they could meet the eight columns which stretch to the ground like sprout in the spring.

And then they could go up using the circular staircase to the ‘SUMMER’ exhibition hall which is located in the third floor. After reaching the hall audiences who were already tired would be in the pouring rain like a sudden shower in the middle of summer.

The motive of the ‘FALL’ exhibition hall is the color of maple leafs in the fall. The main point of the hall is that it was made to be connected with the sunset on the sea. It was inspired by a window of Ronchamp Chapel of Le Corbusier. The window is located in the thick wall. And it is big from outside and small from inside. Light through this specialised window would bounce in the wall and it makes mysterious atmosphere.

With the same way of Ronchamp Chapel, the fall exhibition hall was made to locate the sunset in the center of the hole in the wall. And then the sunset’s red color would dye the hall red.

To make a narrative of winter with just architecture, the main point was to maintain low temperature in the exhibition hall. This sculpture which took the main materials; stone and steel would be located in the second basement level. It is easy to lower the temperature.

In addition, the water in the center of the hall got chilled by the cold air. And the four monoliths which touched water made the air in the hall cooler with their high heat conductivity.

PLUGGED BALLOON HOUSING After le corbusier declared the dom-ino system in 1915, we have developed lots of scientific progresses. But architecture still has imitated something which was made about 100 years ago. In a new century, an immaterial value passed over a material value. However, architecture still has restricted one’s possibility under the name of solidity. To get rid of this restriction, I designed a new paradigm architecture which is light, easy, flexible and suitable for the 21st century.

100 years after dom-ino system by LE CORBUSIER A reason of existing buildings should be fixed was for architectural equipment such as water and electric systems. To give freedom to buildings, I designed a soft architecture where located a core at the center of the building. The core have toilets, kitchens and laundries for users. Thanks to the development of wireless electricity we don’t need plugs in every room.

And then the building would be sufficient with a minimal structure and equipment. As a result, the individual room-units could be free to be moved. These room-unit were made of a same material of a water tube. So it could change its size with or without air. Also users could buy this unit through just the internet, and if they need to move their houses, it could be moved easily to another franchised core.

SCULPITECTURE SERIES This work was considered to realize ‘sculpitecture’ in the gallery. The work was focused on how to make the architectural sculpture in the limited space of exhibition hall. The layered objects was used to make the sense of space. It is the extended work of <layered sculpture>; the project no.2 in this portfolio.

This image is the composite photograph of sculpitecture series in the exhibition hall. The size of the artwork is 20mx20 and it is made of compressed styrofoams to be built easily like architecture study models.

/ ARCHITECTURAL PARK This work is more developed version of sculpture in a way of architecture. Audience would appreciate the sculpture through walking and looking. And the architectural park is composed of architectural elements; door, wall, ramp, window, arch, and stairs. And we could take a walk like in parks.

Le corbusier maintained the notion of ‘promenade architecture’ in his work. In this sculpture, we could appreciate the sense of architecture and sculpture at the same time.

all right reserved by sculpitecture